I’ll often ask Andrew if he has any requests for dinner.  Most of the time he leaves me to my own devices.  But when he does ask for something, I jump. This recipe is the result of his request for Fish for dinner.  I was happy to oblige because, quite honestly, there’s nothing quite so simple as getting a piece of fish on the table.  Fish cooks in no time at all and fish lets you cover a lot of ground with so many varieties available.  This is especially true in port cities like New York.  To satisfy Andrew’s request, I found a recipe that was beautifully enticing in its photograph.  It was a filet of trout with a layer of crisply cooked Spanish ham atop the tender white fish.  There were slivers of garlic and dark green parsley and discs of tiny red chiles floating atop the ham.  Under the name of the dish there was this quote: “This dish is almost a cliché in Navarra, but it’s absolutely delicious,” says Alex Raij. “The Spanish ham keeps the fish from drying out, basting it with its inimitable fat.”  I had no clue who Alex Raij was, or where Navarra was in Spain or why the dish is almost a cliché.  All I really knew was it was a great way to cook Trout in very little time and with great results.  And I knew I wanted to find out more about who Alex was. 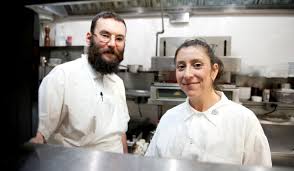 It turns out that Alex and her husband, Eder Montero are the Chef Owners of some of New York’s greatest Spanish kitchens.  Not only that, but I had been to one of them and had given it the #1 position on a list of the 12 Best Burgers in Manhattan (see https://chewingthefat.us.com/2014/02/part-2-12-best-burgers-in-manhattanplus.html.)  It was slightly embarrassing to say the least. I’ll cut myself some slack because I wrote the post in 2014.  What’s more, the best burger in Manhattan was to be had at a Basque restaurant called El Quinto Pino and its neighboring Txikito both of which belonged to Chefs Raij and Montero.  (The rest of the Chef’s empire consists of La Vara in Brooklyn.) What

was a hamburger doing in a Basque Restaurant?  The answer is being inventive with melted Idiazabal cheese, a smoky Basque sheep’s milk cheese and their “special sauce” which is half mayo, half crème fraiche augmented with pickled quindilla peppers, pickled onions and cornichon. So how had the chef ended up cooking Trout in Navarra which I discovered is in Basque country tucked in a corner of Spain right below the French border?  The province has no coast line at all.  But what it does have is the Irati River where fly fishing rules.  Chefs Raij and Montero had gone there to visit a winery where Alex had tracked down her favorite wine “Vega Sindoa El Chapparal.”  It was while there that she had cooked our Trout Dinner.

Normally I’m a stickler for following recipes to a T.  In this case, when I got to the market, while I was delighted with the price of the Trout ($8.50 a lb.), I was sorry to see that Serano Ham was going to set me back $12.99. The far less expensive prosciutto proved to be a great substitute.  If there’s anything about cooking this meal, it’s that the you must have everything mis-en-place (put in place) so that you can keep up with the lightning-like timing of this recipe.   We like heat in our house and so the fact that some of the red chili pepper seeds ended up in the dish was intentional.  You can control the heat by controlling the number of seeds quite simply by removing them before you add them to the olive oil and garlic.  The only other caveats to this dish is to be sure to remove any pin bones you find in the fish filet and that you have one or two spatulas to lift the fish from skillet to oven.  Other than that, this dish is a delicious snap.  Here is the recipe:
Pan-Seared Trout with Prosciutto and Garlic Chile Oil from Chef Alex Raij in Food and Wine Magazine.  Serves 6. Takes 25 minutes to cook. 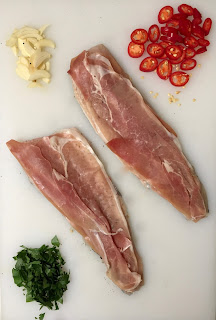 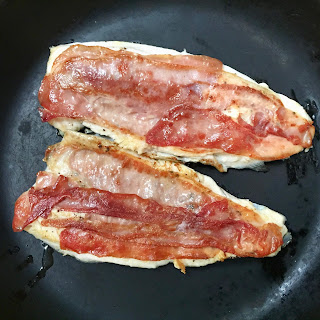 2. In a large nonstick skillet, heat 1 tablespoon of the olive oil until shimmering. Add 3 of the trout fillets, ham side down, and cook over moderately high heat until the ham is crisp, about 3 minutes. Turn the fillets and cook until the skin is crisp, about 1 minute. Transfer the trout fillets to a large rimmed baking sheet, ham side up. Cook the remaining fillets in 1 more tablespoon of olive oil and transfer to the baking sheet. Keep the fish warm in the oven. 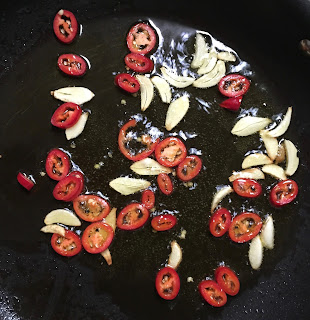 3. In the same skillet, heat the remaining 1/4 cup of olive oil. Add the garlic and cook over moderate heat until golden, about 2 minutes. Add the chile and cook for 1 minute. Add the parsley, vinegar and a pinch of salt. Remove the skillet from the heat. 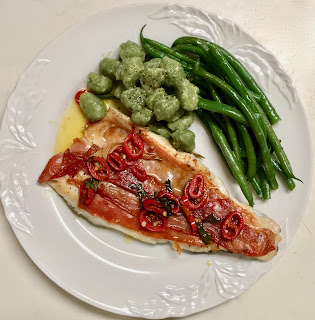 4. Transfer the trout to plates, ham side up. Spoon the chile-garlic oil over the fish and serve right away.