Part 2: The 12 Best Burgers in Manhattan…plus one. 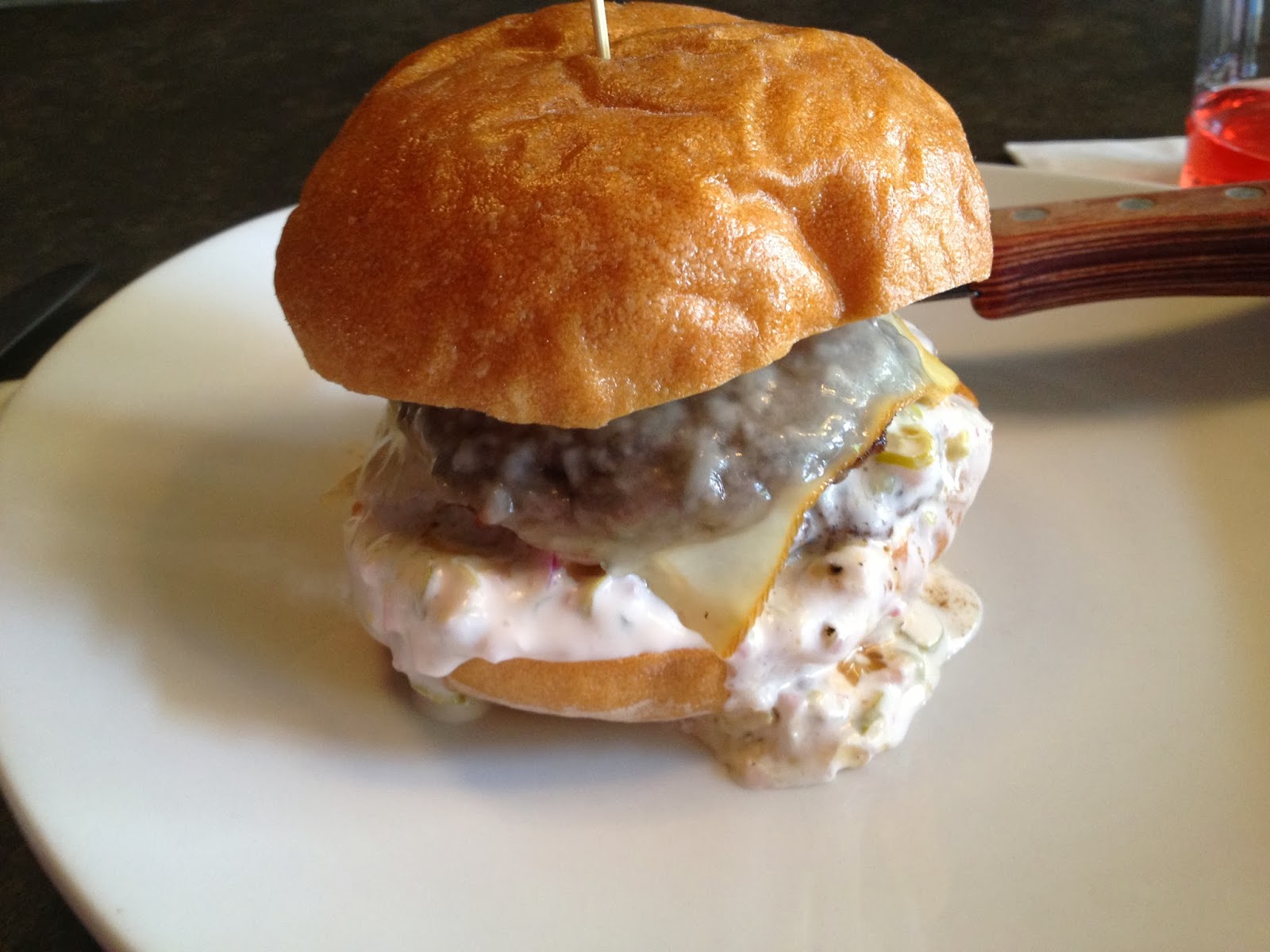 As I pointed on Monday in “The 12 Best Burgers…Part 1”, New York Burgers fall into two distinct camps: The “Classic” Burgers which stick to the same pattern of beef patty, American Cheese, soft bun, ‘special sauce’, lettuce and tomato.  From there we move on to the “Gourmet” Burgers. Some of these are crafted by some of the city’s best Chefs.  April Bloomfield, Marc Murphy and Daniel Boulud are all inventors of phenomenal burgers. To this roster I had to add the newly arrived Umami Burger which hails from California, and a  salute to a burger of unknown provenance but unquestionable character: El Doble, which, in true New York fashion, is made only at lunch and only at a Basque Tapas Bar called El Quinto Pino. We’ll get there eventually, but here are the 7 burgers…plus one, that made my Best Burger list, Part 2.

jalapeno and cheddar tater tots that are served alongside it. I remember being slightly put off to discover that LandMarc, his wide-open and family friendly place in the Time Warner Center offered nothing of its kind.   So I was really pleased when I stumbled into his newest venture, Kingside, off to one side of the Viceroy Hotel that’s just opened at 124 W. 57th St. (Tel: 212-707 8000).  Much to my amazement there was Chef Murphy himself behind what’s called the Chef’s Table which might be called the bar anywhere else.   Since I had my heart set on a Murphy burger, I went for the one on the menu. Kingside says that the menu “takes inspiration from Marc Murphy’s childhood, highlighting items that trace back to his French heritage…(and) Italian roots.” I had always assumed “Murphy” was an Irish name.  #6 the Kingside Burger however, must be what he meant by Italian roots: It’s topped with a slice of soppressata, giardiniera relish and white cheddar.  There are also three pots filled with condiments to add to all the flavors already present on the burger.  It’s priced at $21.00.  You can also order it plain for $18.00 but why would you?

If In-N-Out Burger hasn’t yet made it to New York, California’s fastest growing Burger group has; Umami Burgerlanded at 432 6th Avenue (between 9th and 10th) Tel: 212-677-8626) last summer.  It’s been packed every evening. But when I went, midday, I was quickly seated at the bar.  The burger here trades on the idea of Umami—which is Japanese for ‘pleasant savory taste’, no matter how many things you’ve been told it

means.  The Umami burger I tasted was one of six beef burger variations.  There are four more non-beef versions and the specialty burger isn’t beef at all but “The 5 Spice Duck Burger”.  Well I drew the line and on my visit ordered the # 5 Truffle Burger.  But the extent of the truffles extended only to Truffle Oil and I ill advisedly ordered Truffle Fries with that.  Too much truffle oil makes for less Umami than I’d bargained for.  But if you want to know what all the fuss is about, head to Umami Burger.

Heading way across town, you can’t do much better than the burger at The Spotted Pig (314 West 12th St. Tel:212 620-0393), the town’s first Gastropub, presided over by the Princess of Pig, April Bloomfield. Her motto must be if you’re only going to do it one way, do it right.  Her # 4 Chargrilled Burger with Roquefort cheese and a blizzard of shoestring fries will set you back $21.00 and it’s only available at lunch.  Since the place is perennially packed, sit at the bar and enjoy this spectacular burger.  But I cannot mention April Bloomfield with sending you back uptown to The Breslin (12 West 29th St. Tel: 212 679-1939), her second NYC endeavor and home to–not a beef burger–but the PLUS ONE One Lamb Burger so good it may make you flee beef altogether.  Priced at $21.00, this chargrilled burger comes with a slab of Feta Cheese, a side of cumin mayo and something called Thrice Cooked Chips.  This may be a walk of the wild side from Beef Burger fanatics but it’s sure worth the trip.

trip from anywhere.  DB Bistro Moderne (55 W 44th St., between 5th and 6th Tel: 212-391-2400) is where I spent $32.00 for  #3 Original DB Burger ‘sirloin burger with braised short ribs, foie gras and black truffle on a parmesan bun’.  Even if Daniel Boulud’s name were not on the menu, this delicious concoction would be worth every penny.  It was however so rich that I was perfectly happy to split one with Andrew.  And DB Moderne y threw in perfectly cooked ‘frites’ if you need to justify your purchase.

Heading down to the Bowery, (yes, out of town friends, that
Bowery and yes, it’s hip as can be) one of our favorite places is DBGB (299 Bowery, just north of E. Houston St. Tel: 212-933-5300). Daniel Boulud’s bistro is so named because it was built a stone’s throw from the rock club CBGB that closed 7 years ago.  The place is truly unpretentious which is saying something for M. Boulud who runs some of New York’s finest and most atmospheric restaurants.  On the menu are three burgers: The Yankee, The Piggy and The Frenchie ranging in price from $14 to $19.  But give me #2 The Frenchie every time.  At $17, it’s topped with confit of pork belly, arugula, umami tomato-onion confit (there’s that word again), morbier cheese and sits on a peppered brioche bun.
Finally, swinging home through Chelsea you’ll find El Quinto Pino (401 East 24th St. Tel:212-206-6900) This is the sister restaurant of Txikito at 240 Ninth Avenue (Between 24th and 25th Sts. (Tel:212-242-4730.) It was at this unassuming little ‘snack bar’ that a burger called #1 El Doble was invented. When Txikito stopped serving lunch, they handed off the recipe for “El Doble” to El Quinto Pino.  Thank the culinary gods

for this. Because “El Doble” has no right to be as good as it is. Both places are Basque so truly a burger has no place on its menu.  But somewhere along the line tradition gave way to an $12.00 miracle of two thin patties of beef chuck cooked on a flat top and topped with melted Idiazabal cheese, a smoky Basque sheep’s milk cheese.  Their special sauce is half mayo, half crème fraiche augmented with pickled quindilla peppers, pickled onions and cornichon.  This they place on a Tom Cat Bakery roll.  This tastes like no hamburger I have ever eaten and it’s likely one I will never forget.

So that’s it.  And if you think I’ve eaten a lot of burgers, consider remember those 14 billion burgers Americans consumed in 2102 and the 100 burgers the average American consumes annually. I don’t think I come close to that.  Although I wouldn’t mind trying.
Author: Monte Mathews
Filed Under: "El Doble", 12 Best Burgers NYC, April Bloomfield, DBGB, Ditch Plains, El Quinto Pino, Kingside, Marc Murphy Burger, The Breslin, The Spotted Pig, Umami Burger
A visit to April Bloomfield’s Spotted Pig and a recipe for the great British delicacy Bangers and Mash
Smoked Trout Chowder adapted from April Bloomfield’s "A Girl and Her Pig"