Home » Thomas Keller’s Vinaigrette and Two Great Ways to use it: In Mixed Vegetable Salad and a Layered Chicken Salad in a Mason Jar.

Thomas Keller’s Vinaigrette and Two Great Ways to use it: In Mixed Vegetable Salad and a Layered Chicken Salad in a Mason Jar. 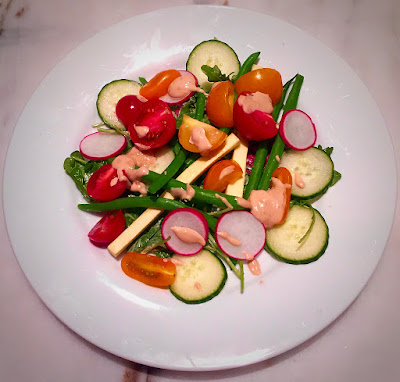 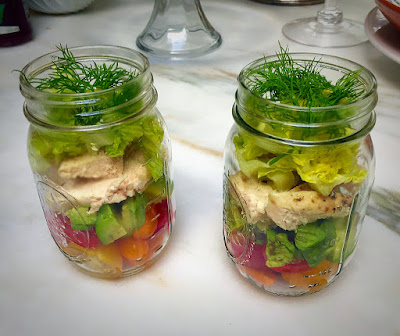 For years I’ve relied on Julia Child’s “Screw Top Jar” method for making a basic vinaigrette which I’ve enhanced with Dijon mustard and a little Garlic.  It’s a good salad dressing and I like to keep it on hand at all times.  But herein lies the problem. Inevitably I refrigerate the dressing and when I need to serve it, I find it congealed and unusable.  I then put it in the microwave which does swift work to liquefy the dressing.  But it also serves to heat it which means it needs time to cool.  A vicious cycle if there ever was one.  So the minute I saw Thomas Keller’s recipe for his Vinaigrette in Food and Wine Magazine, I was hooked.

Chef Keller, arguably America’s most famous chef, claims that this is one of his most prized recipes.  And the salad which Chef Keller tops with his dressing was also wildly appealing. It is a superb way to use just about anything you have on hand to make a salad that’s a cornucopia of great fresh taste.  The Chef’s version, shown here, contains breakfast radishes, radicchio, endive, baby zucchini, sugar snap peas, baby carrots, Persian cucumbers, asparagus, baby arugula and mixed herbs for garnish. (My own had infinitely fewer ingredients including cherry tomatoes, English cucumber, radishes, par-boiled haricots verts and zucchini.) The dressing was as advertised: Creamy, full of mustardy, balsamic flavor and completely emulsified.  It went into and came out of the fridge like a champ. No microwaving necessary.  So I enlisted the dressing to make another recipe I’d wanted to try: a layered chicken salad that went to the beach but could just as easily go to the office or to a tailgating picnic or to school with any child gourmet. In short, anywhere.  And with bragging rights that arguably America’s most famous chef made it.

Chef Keller has had a career that’s spanned thirty years. And while he’s most famous for The French Laundry in Yountville CA and Per Se in New York City, somewhere along the line, he worked in the kitchen of a restaurant called La Rive, in the far less glamorous precinct of Catskill, New York.  In the 80s, he toiled there during the summer for several years, spending his winters elsewhere.  While restaurant was described as being French, Chef Keller’s goal in creating his Mustard Vinaigrette was to recreate “the bottled dressing we all had when we were kids. It’s a little thinner than mayonnaise, but it’s pourable. You can make the dressing as thick as you want by adding a little more oil.”  My experience with the dressing is that it emphatically needs some thinning out and, to my way of thinking, not with oil but with water.  This is especially true in its role with the Layered Chicken Salad.  Here you want to add it to the jar at the last minute.  I used a jam-sized mason jar of the dressing which we poured over the Chicken Salad with abandon. Here are the recipes. 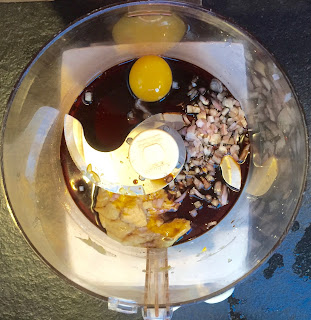 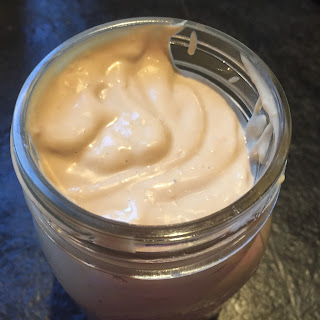 2. Keep in a pint sized Mason Jar.
Recipe for the Salad:
I urge you to be creative here. Check Chef Kellers enviable list of vegetables or downsize to match my own. 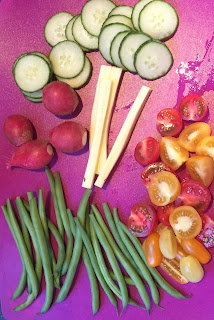 1. Make the salad In a bowl, toss all of the ingredients except the herbs. Season with salt and pepper. Toss with 1/4 cup of the vinaigrette. Garnish with herbs and serve with more dressing on the side; reserve the remaining dressing for another salad.
Recipe for Layered Chicken Salad:
Serves 2. Takes a maximum of 30 minutes.
Again, the original recipe called for roasted red bell peppers from a jar which I switched out for more tomatoes.  And the original proposed using a Rotisserie Chicken. I used a 6 oz. boneless chicken breast that I cooked in a 400 degree oven for 12 minutes. 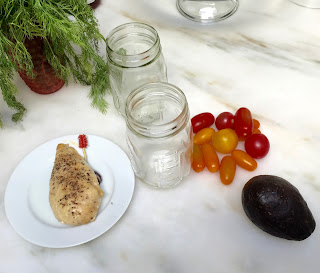 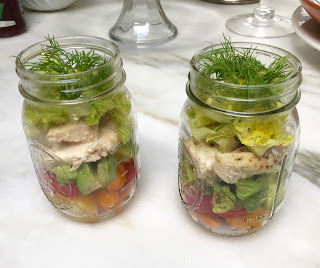 1. Layer the ingredients starting with halved cherry tomatoes, followed by the avocado, the chicken and finally the herbs. 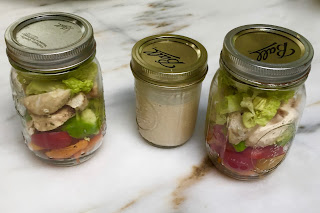