The word “Quick” is a dog whistle when you write a blog like this.  Knowing how time-pressured most people are, when I see it  attached to any recipe, at the very least it requires a look.  And when I saw this recipe was from one of my favorite recipe developers, Grace Parisi, I took a closer one.  I am very glad I did and I think you will be too.  For years, Grace was the life force in the Food and Wine Magazine kitchen and she really knows how to make home cooks heroes—often in very little time.  In this Quick Chicken Kiev, a chicken breast is stuffed with herbal butter.  The breast is rolled in flour and egg and breadcrumbs and fried.   Pulled from the skillet, glorious, crispy, deep golden chicken appears.  Cut into it and a river of butter-y goodness emerges along with the scent of dill and chives.  A lemon-y arugula salad is served alongside. It takes all of 40 minutes to get chicken and salad on the table.  And it is worth every minute.  Grace’s recipe lacked for nothing.  So I had to ask myself what had she done differently from “ordinary” Chicken Kiev to make this one “Quick”?  As it turns out, Grace trimmed an hour off the original recipe and as far as I can see, made a superior Chicken Kiev.

Chicken Kiev, despite its name, was not invented in the Ukrainian capital.   Modern Ukrainian chefs claim theirs is the only authentic recipe for the dish.  But even they will admit to its French roots.  Russian royalty paid homage to French cooking by sending their chefs to Paris to learn French techniques and recipes.   In the late 1840s, they returned to Russia with a recipe called a Mikhailoska cutlet.  In Paris, the dish had been made with veal.  At the time, chicken was more expensive and considered a great delicacy so the Russian chefs shifted over from veal to poultry.  It was very popular and often served at Soviet Union diplomatic dinners. But Chicken Kiev didn’t get its name until it crossed the Atlantic.

After World War II, the Russian émigré community in New York was a growing presence.  To lure diners to restaurants like “The Russian Tea Room”, the dish was renamed “Chicken Kiev”.  In Kiev itself where Chicken Kiev wasn’t on many menus, it was the arrival of tourists requesting the dish in the 1960s that it became popular.  One prominent Ukrainian chef went so far as to day that “Chicken Kiev made Kiev famous.”  It also made Kiev’s chefs guardians of a very specific recipe.  Over the years variations on the ‘stuffing’ have come to include cheese, garlic and parsley.  The “authentic” Kiev recipe calls for only butter inside and a little of that butter remains un-melted when it is served. The chicken comes with a small bone sticking out of it.  It does look like a golden torpedo but its taste is of fried chicken, crunchy on the outside, meltingly tender on the inside and, in Grace’s recipe, adds a stream of dill and chive butter that is irresistible. Make this once and you will make it often.  Here is the recipe: 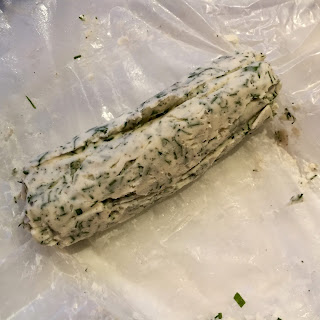 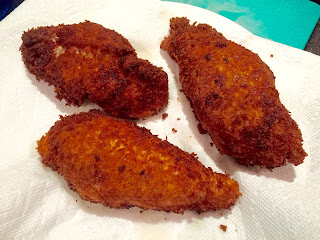 2. In a large skillet, heat 1/2 inch of olive oil until shimmering. Add the chicken and fry over moderate heat, turning once or twice, until golden and cooked through, about 8 minutes. 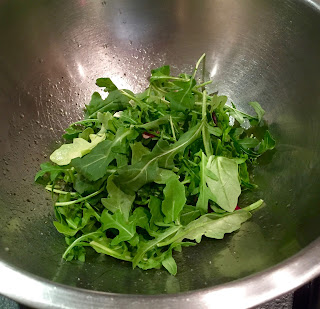 3. In a large bowl, whisk the 2 tablespoons of olive oil with the lemon juice and season with salt and pepper. Add the arugula and toss. Transfer the chicken to plates and top with the remaining herb butter. Serve the arugula salad alongside.
Author: Monte Mathews
Filed Under: Boneless Skinless Chicken Breasts, Chicken, Costco Chicken Breasts, Food and Wine's Quick Chicken Kiev, Grace Parisi's Quick Chicken Kiev, Quick Chicken Kiev, Ukrainian Cooking, Weeknight Dinners
Rao’s Lemon Chicken My Way, with a hand from Cook’s Illustrated
Thomas Keller’s Vinaigrette and Two Great Ways to use it: In Mixed Vegetable Salad and a Layered Chicken Salad in a Mason Jar.