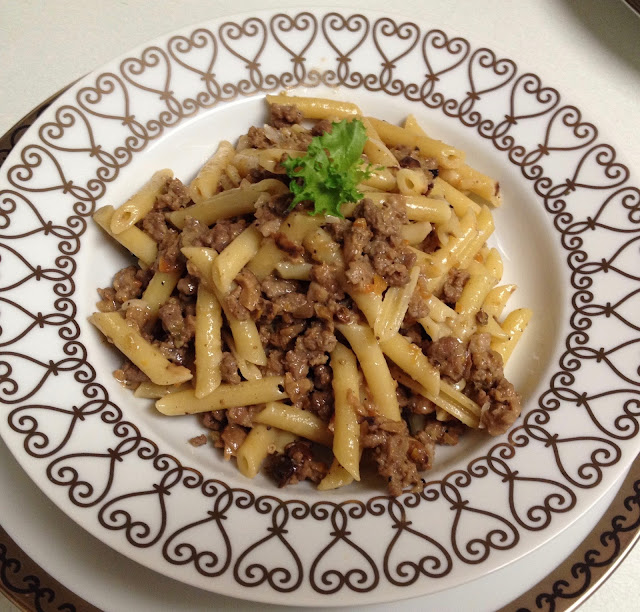 This terrific recipe checks off at least 3 boxes on my list. First, nothing is more comforting on a winter night than a bowl of pasta with a really great sauce.  This fits that bill perfectly.  It’s a cinch to make, easy enough for any weeknight.  Its one of those dishes that tastes better and better as you eat more of it, discovering more of its seasonings as you do. Second, it’s from Amanda Hesser, author of the most recent version of The New York Times Cookbook.  While at the Times, Ms. Hesser wrote no fewer than 750 stories and featured recipes.  That was before she even got to the cookbook.  Ms. Hesser then took off and founded, along with a partner, Merrill Stubbs, Food 52. This wildly successful food website that won a James Beard Award straight out of the gate in 2012 and the IACP (International Association of Culinary Professionals) Award for Best Website in 2013. To say she knows her way around the kitchen doesn’t do her justice.   And finally, it’s a recipe that let me dip into its past. There I discovered a rich history as interesting as the dish itself.

Bolognese is arguably the most universally known of all Italian pasta sauces. Spaghetti Bolognese is likely the one item that links every Italian restaurant in the English-speaking world.  In Italy, the dish is called Ragù (alla) Bolognese or simply Ragù.  It’s the foundation for two dishes: Tagliatelle al Ragù and Lasagna alla Bolognese.  What you will never find in Italy is Spaghetti Bolognese because no self-respecting Italian cook would pair Spaghetti with a meat-based sauce because the pasta having a smooth surface is not able to absorb the sauce.  Having grown up with something referred to in our house as “Spaghetti Meat sauce”, this was quite a revelation to me.  The other revelation was that the original recipe for Bolognese never called for tomatoes of any kind.  The tomato in Italian cooking is from the south of Italy.  Since the vast majority of Italian Americans hailed from the south, they brought their love of tomatoes to the new home. They incorporated them into recipes so frequently, a whole class of restaurants are called Red Sauce Italian.  Need I tell you the recipe for White Bolognese contains not one drop on tomato in any form.  Surprisingly, the original recipe didn’t either.   And it’s surprisingly recent in origin.

Pellegrino Artusi was one of 13 children born to a wealthy merchant family in Forlì, some 75 kilometers from Bologna. Generally considered the food capital of Italy, Bologna was where Artusi went to school and lived for some 15 years.  The family business moved to Florence in 1851 and Artusi moved with it.  He never married and was consumed with two hobbies; Literature and the Art of Cooking. In Florence he penned his most famous work: “La Scienza in Cucina e L’arte di mangiare bene” (The Science of Cooking and the Art of Eating Well).  He took a very scientific approach to cooking and every recipe was subject to rigorous trials and experiments.  It was in this book, self published in 1891, that the very first recipe for Bolognese sauce first appeared. Artusi called it Maccheroni alla Bolognese—Maccheroni being the generic term for any kind of pasta.  The recipe called for lean veal along with pancetta, butter, onion and carrot. The meats and vegetables were finely minced and cooked in butter and then covered in broth.  Artusi also suggested that the taste of the dish could be futher enhanced by adding small pieces of dried mushrooms, a few slices of truffle or a chicken liver cooked and minced along with the meat.  The final touch in Artusi’s recipe was the addition of half a glass of cream to make the sauce even smoother.   The pasta choice was to be medium sized and both pasta and sauce were to be finished with Parmigiano cheese.   Bingo! 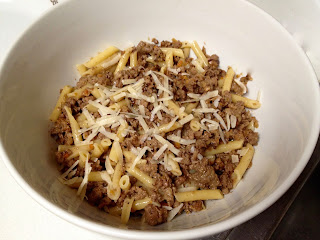 White Bolognese Sauce with Pennine or any other smaller tubular pasta like Ms. Hesser’s Rigatoni.  I made it with Pennine which were part of a Christmas basket.  In reading the comments on the recipe, there was one universal concern.  The cooking time, while nowhere near those of a traditional “Sunday sauce”, was at least double what Ms. Hesser had called for. But even then, it comes together in an hour. Here is the recipe: 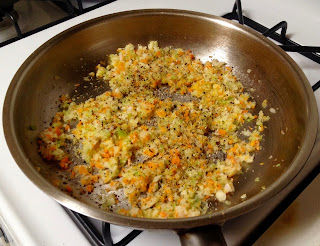 1. Add enough oil to a very large, deep saute pan to coat the bottom with a thin film and place over medium high heat. When the oil shimmers, add the onion, carrots and celery and saute, stirring to coat with oil, until glassy and just tender, about 5 minutes. Season lightly as they cook. (If the pan does not have much room for the meat, pour vegetables into a bowl near the stove, and return the pan to the heat; otherwise, leave them in the pan.) 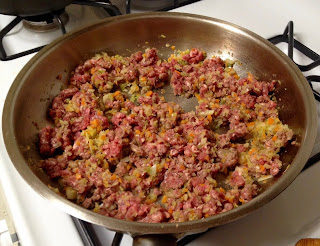 2. Add the sausage and beef to the pan, breaking it into walnut-size pieces. Brown the meat well, adjusting the heat so the meat does not stew. 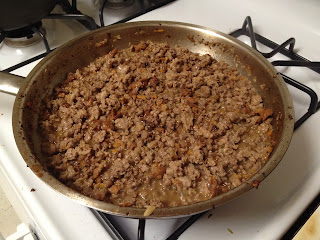 3. Pour in the wine and keep at a rapid simmer until the pan is almost dry. Then pour in 1 1/ 2 cups beef bouillon and lower the heat to medium. Simmer gently, uncovered, until the bouillon is nearly gone. Stir now and then. Meanwhile, chop the rehydrated porcini into small pieces, reserving the mushroom broth, and bring a large pot of salted water to a boil.

Stir enough mushroom broth into the simmering sauce to cover the meat  halfway (about 1 cup), along with the chopped porcini, and continue simmering another 10 minutes. The sauce should be quite loose, but not soupy. Taste and adjust seasoning. It should be highly seasoned. When you think it’s the right consistency, pour over the cream and fold to mix, then shut off the heat and cover. 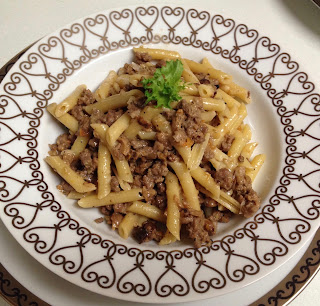 4. When the pasta water is at a full boil, add the rigatoni and cook until still firm, but not hard, in the center. When the pasta is almost done, scoop out 1 cup of pasta water and keep it near the stove. Drain the pasta and add it back to the pot. Pour the pasta sauce on top and fold it in with a wooden spoon. The pasta should not be dry. Add a little pasta water or mushroom broth to loosen it. (It will continue to soak up sauce on the way to the table.) Present the pasta on a deep platter or in a tureen. Pass the cheese at the table.