There’s something magical about just saying “I’m spending the day in Monte Carlo”.  This postage stamp Principality, which is actually the size of Central Park, simply reeks of money. Towering apartments shoot upwards.  And everywhere you look there are yachts the size small cruise ships. Even now, with the “Season” at its end, the harbor is still packed with mega boats, some of the largest I have ever seen. Many of them would never even fit into the harbor at Gustavia in St. Barth which is where I generally see enormous boats tied up along the quai.  There are the Rolls and the Bentleys, the stores that close when preferred customers show up and the prices of absolutely everything are guaranteed to make a mere millionaire blush.  A walk through the market features flowers costing twice what they did in Toulon just yesterday.
Here, the Viking- included tour is a walk through Monte Carlo, easily undertaken in two hours. One of the optional tours is literally sky high: You can helicopter over Monte Carlo which several Viking Star passengers chose to do.
The entire Principality is a “shrine” to Princess Grace, the former Grace Kelly of Philadelphia, PA.  As hard to believe as it may be, her Serene Highness La Princesse de Monaco really did put the place on the map. She arrived to make a movie, “To Catch a Thief” with Archie Leach, better known as Cary Grant.  It was apparently love at first sight when she met its Prince and six months to the day they met, she married Prince Ranier Louis Henri Maxine Bertrand Grimaldi, whose family owned the place.   The Grimaldi Family have a somewhat salty history.
(I distinctly remember my mother saying “She could have done better”. Anyone who knew my mother will attest to the certainty of her having said this) They were Italian ‘Pirates’, according to our guide, who claimed the land and established themselves here.  They were not nobility of any kind.  Their title was purchased from a destitute Spanish Prince who was only to glad to convey it for a fee. They are now among the richest families of Europe due to the astonishing value of Monaco’s real estate. I stopped at a realtor’s window where the least expensive apartment advertised, a two bedroom was listed for sale 2.8 million Euros. There was also a Studio with Kitchenette to be had for a mere $14,500 Euros a month.  In comparison, New York prices look like positive bargains even though a one bedroom apartment in NYC now averages close to $1,000,000. 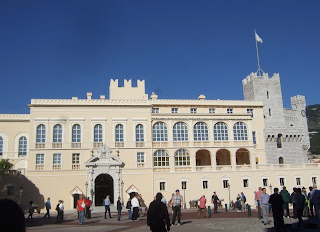 The walking tour takes you past the palaces of Princesses Stephanie and Caroline and of Prince Albert, and through the seaside gardens below them.  The Cathedral visited holds her tomb and that of her Prince.  The Guide points out the route of her fatal auto accident. It ends in the Square in front of the Royal Palace is easily under two hours.  You can stand and wait for the Changing of the Guard which takes place daily at noon.  I had other ideas.
Working on a story about Nice’s famous Socca pancakes, the chickpea flour specialty that the place is well-known for, I hoofed it to the train station.  Despite Monte Carlo’s diminutive size, the place is all uphill  and the walk to the train was arduous to say the least.  Later, fellow Viking Star passengers were astonished to hear that Nice is perhaps a 20 minute train ride away, hugging the magnificent coast so closely that I could see the swimmers taking advantage of the extraordinarily warm Fall day.
Nice was jammed.  This week, leading up to All Saint’s Day, is a school holiday for much of Europe.  It’s apparent everywhere that much of Europe has decided to travel en famille far and wide this week from Barcelona to Venice, like the ship.   But it was an easy streetcar ride in the most modern and efficient tram from the Train Station to the famed Flower Market, where Socca Pancakes were in surprisingly short supply.   I did find one but you’ll have to read The Daily Meal story for this picture to mean much.
I had a Quatres Saisons Pizza at one of the outdoor restaurants ringing the market.  As delicious as it was, it was hard to finish.  Harder still was to find the Chickpea flour which I’d every intention of buying to bring home to recreate the recipe for The Daily Meal.  And here the new world order surprised me again.  Going into a grocery store not two blocks from the market, I asked the clerk for “La farine pour faire la Socca”.  He informed me in French that he didn’t sell it but that I could order it on Amazon.
Author: Monte Mathews
Filed Under: Day Seven of My Great Viking Adventure Part 2: Putting the Monte in Monte Carlo, Monaco, Monte Carlo, Nice, France, Viking Ocean Cruises, Viking Star, Viking Star Mediterranean Odyssey
Day Five of My Great Viking Adventure Part 2: Cabin Fever
Day Eight on My Great Viking Adventure Part 2: Florence, David and the Selfie Stick