As night fell, Viking River Tor passed through the first of a series of locks that will bring us up river and will raise the ship a staggering 1300 feet before we arrive in Nuremberg.  This particular lock put us in the extraordinary position of being able to touch the walls of the lock from our balconies. We might have been 6 inches from its side and the entire ship was well below the depth of the canal.   Once we were in the lock, it quickly filled with water and we rose up till we emerged onto the next level of the river. I’ve sailed through both the Panama and the Corinth Canals and to me, a lock is one of the most interesting of all feats of engineering.  These locks were no exception.

It was the middle of the night when we passed through the portion of the Danube that borders Slovakia.  We sailed past Bratislava, its capital city dominated by the eponymous Bratislava Castle.
Then we were on our way to Vienna, Austria’s capital, the home to 1.8 million of its population of 8,000,000 people.  It was my first visit to the city and I had created quite an image of it. But certainly it was not what appeared through the glass doors of my stateroom.  There
was a city as modern as any,


dominated by several very recently built skyscrapers.  Since my vision of Vienna ended with Hapsburgs, I was quite taken aback.  It was only when we disembarked for our City Tour that “my” Vienna appeared.  Even then, one quarter of the city was destroyed by Soviet bombs in 1945. So instead of the almost complete homogeneity of Budapest, Vienna’s blend of buildings is an often jarring set of contrasts.  Old ornate facades from Austria’s glory days as the capital of an Empire, stand cheek by jowl with utilitarian buildings thrown up to replace bombed-out shells. Fortunately there is now some newer, and much finer, Modernist Architecture.

The heart of the old city, circled by the Ringstrasse, or Ring road, is mercifully intact. It is dominated by the extraordinary Royal Palace.  The palace is a mastery of symmetry and classical elements representative of the enormous power and influence of the Hapsburgs. This Dynasty ruled this country and many of its neighbors from 1440 until 1918.  The zenith of their power was the reign of Maria Theresa, Mother of 16 children, and thence, Grandmother of a huge swath of Europe.  Intermarriage among first cousins led to their eventual downfall but their power and majesty is still apparent in the glorious structures erected on their behalf. 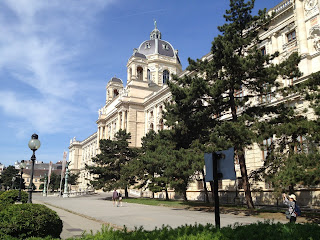 Vienna was at one time the fourth largest city in Europe, capital of music (Mozart, Beethoven, Lizst), literature (Goethe), intellect (its university is 650 years old) and home to such modern figures as Sigmund Freud and most unfortunately, the little house painter, Adolf Hitler. But the old city of Vienna belongs to the Hapsburgs.


Viking River offered two Guided city tours.  There was a full City Tour and one that focused on Vienna’s role as a capital of Art Deco.  As mentioned in an earlier post, Viking’s daily shore excursions are included in their fares and they are wonderfully well done, with knowledgeable local guides who fill their talks with facts both informational and fun. We passed every major monument in the heart of the old city.  Several of these are currently having their exteriors sandblasted after years of soot and grime have turned their limestone facades black.  City Hall (the perfectly named Rathaus, translation not required) is one.

And then there’s the very symbol of Vienna: Steffansdom, St. Stephen’s Cathedral.  The Gothic South Tower rises 446 feet and is visible from almost everywhere in the city.  It is considered the symbol of Vienna, what the Eiffel Tower is to Paris. Undergoing its sand blasting, one entire end of the Cathedral is covered in scaffolding.  And on top of the scaffolding is a scrim.  And printed on the scrim, courtesy of the Coca Cola Company of Atlanta, Georgia is a giant bottle of Coke and the headline: “I kissed Vienna”.  Honestly, if this is not cringe-worthy, what is? I can only imagine the outcry if the similarly shrouded St. Patrick’s Cathedral in New York were decked out with a Coke bottle.  Well according to our guide, this bit of crass commercialism replaced something even worse: An intimate apparel poster featuring an underwear-only model.

Second prize for “Most Chutzpah by an American Company” is surely the presence of 9 Starbucks branches.  Since Coffee culture is an inherent part of Viennese culture, represented by the 600 Konditorei (Coffee Houses), some of which date back to Mozart, what is Starbucks thinking? Well the Viennese haven’t taken to Starbucks.  Planned expansion to 60 branches has stopped and the only people who frequent Starbucks are those Americans who cannot leave home without their double Caramel Mocha Machiatto Latte. No self-respecting Austrian has darkened their doors after their initial curiosity was satisfied.

At the end of the guided portion of the tours, there’s free time to pursue one’s own interests.  Since Vienna’s Coffee culture will be the focus of one of the pieces  I am doing for The Daily Meal, I took off to the Sacher Hotel Konditorei and its justly famous Sacher Torte.  Stay tuned for that.  Back to the ship for lunch, which I elected to take on the Aquavit Terrace in the bright sunshine.

Extra charge excursions are offered only when time permits.  In Vienna, I joined the tour of the Summer Palace of the Hapsburgs, Shöenbrunn Palace.  This summer retreat, now well within the city limits, was home to Maria Theresa and her large brood of 16 children. Most famously, one of Maria Teresa’s daughters took the grandeur of the palace to heart.   She was Marie Antoinette whose admonition to ‘let them eat cake’ sealed her fate at the guillotine. Whether the French Queen was referring to Sacher Torte is not recorded.

Shöenbrunn means “beautiful fountain” and an enormous one behind the palace is remniscent of the Trevi Fountain in Rome.  That is, if the Trevi were surrounded by acres and acres of formal gardens.  It was Sunday when we visited and, by all accounts, the first decent weather weekend in Spring.  As a consequence, the place was mobbed and not just with the well-behaved passengers from the Viking Tor.  People pushed through our group, elbowing their way to the front of the rope cords that keep the public a safe distance from the priceless furniture in each room.  It was almost relief to get out of there.

The Mercedes Coaches dropped us off at the ship at 5:30.  Since there was yet another optional excursion, this one to see a command performance of “The Marriage of Figaro”, dinner was infinitely more subdued than the night before.   By midnight, we were on the river again en route to the Wachau Valley, Austria’s wine country.  But first, I had to wait up for a bowl of Goulash soup served for the returning Opera goers.  Because who can go to bed without one?
Author: Monte Mathews
Filed Under: Coca Cola, Cruise Travels, Day Three Viking River Cruises Romantic Danube, Konditorei, Starbucks, Viking River Cruises Post 5, Viking River Cruises Romantic Danube
Day Two: Beautiful Budapest and the Viking River "Tor"
Day Eight: The Last Day of the Trip in Nuremberg, Germany