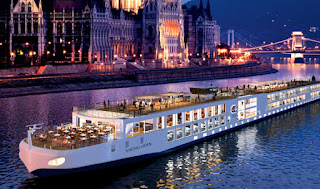 Despite having not slept since Wednesday, the city of Budapest beckoned and won over the comforts of the Tor, one of 29 Viking River longships that ply the Danube in both directions.  I finally arrived in Budapest about 4 pm and there I joined the last stragglers on our first Viking Coach trip from the airport. The glistening white ship was docked right below Budapest’s Chain Bridge, one of many bridges

joining Buda and Pest. I was shown to my stateroom, 317, which is on the top of 3 decks of staterooms and suites.  This veranda cabin is an excellent example of Scandinavian design and incredibly clever use of space.  Done in soothing beiges and blues, it is a model of efficiency with more than enough room to stow everything away.   There’s even a refrigerator. Unlike most cruise lines, Viking invites guest to purchase local beers and wines along the way and has no corkage fees when you bring them along to dinner.

Once unpacked, I did a brief run around the ship:  The “Tor” is light-filled and sparkling, with floor to ceiling windows, light colored woods and more of the soft blues and beiges found in the staterooms.  It holds just 180 passengers in five grades of cabins. The Dining Room can seat the whole lot of us in one single seating. Forward of the lounge, there’s the Aquavit lounge and dining area which tonight featured a Bar Menu.  Since I was truly exhausted and incapable of making even polite conversation,  I opted to go there to be able to sit by myself. (The dining room tables are for 6, 8 or 10.)  Even though it was the casual restaurant, there was an amuse bouche of bacon and dates, a lovely touch.  I should be ashamed to tell you that my first meal aboard consisted of a Hamburger. Eating was secondary to keeping my eyes open. Especially since, at 9:00 PM local time, the Tor cast off its lines to take us on a cruise up the Danube to see the riverside sights of Budapest.  It is a magnificent city and

every monument on the river is lit up forming incredible views on either side of the river.  Most spectacular was the Hungarian Parliament.  This massive building has no less than 365 spires.  Even its highest point has a significance.  It is 98 feet tall which commemorates the founding of the independent republic of Hungary in 1898.   I took masses of pictures but faded very fast and on the return down the river opted at last to surrender to sleep in my supremely comfortable bed.  Tomorrow, we tour Budapest and embark on our up river cruise.  I cannot wait. 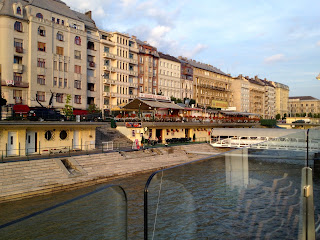