Day Eight: The Last Day of the Trip in Nuremberg, Germany

As much as you know this day is coming, there’s a certain melancholy that sets in when you realize this wonderful voyage is coming to an end.  You might want to linger longer but the reality is your cruise is almost over, your new friends are about to go their separate ways.  And you are going home.  But first, there’s your last stop, Nuremberg.
There’s an optional free shuttle bus that takes passengers into town in the morning, then back to the ship for lunch. That afternoon the official tours take place while the ship moves further upriver to Erlangen where the Tor will dock for our last night aboard.
In many ways, Nuremberg is a fitting place to stop. Nuremberg’s history is full of unpleasantness that people would most like to forget. It is here that you can opt for a World War II excursion that will take you back to Nuremberg’s history of being a Nazi stronghold and later the site of the Nuremberg trials.  These trials

convicted whoever among Hitler’s inner circle had not already committed suicide or fled to Argentina. But if you do not take the full tour, you will still see a couple of these monuments to Germany’s darkest days on your way into town.

Better by far is the historic center of Nuremberg.  This is the heart of the medieval city.  Surrounded by walls, the fortress in its very center is where you will see where the city got its name.  “Nurn” means rock and “berg” means mountain so Nuremberg can be translated into Rocky Mount, whose twin in North Carolina is home base to our dear friend, Roger. 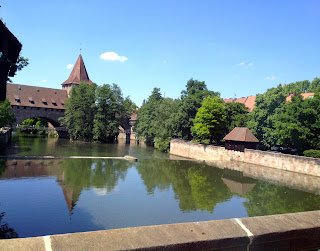 Nuremberg was practically blasted out of existence during the Second World War. 90 percent of its buildings were bombed with no regard to their historic significance or wartime usage.  The animosity the Allies felt towards the Nazis was on full display.  Modern Nuremberg is a triumph of rebuilding. It is often hard to tell what is original and what is a re-creation.  But our guide provided us with several photographs showing the wartime destruction firsthand.  It was sobering to say the least.
In our free hour and half, my friends, the Rev. Al and his wife Mare and their two great friends Sharon and Arnie and I decided to sample the Bratwurst that has made Nuremberg ‘the Sizzling Sausage Capital of Germany’.   We went to Bratwurst Röslein, described as “the largest Bratwurst restaurant in the world!”  Though not as old as the Alte Wurstkuchl in Regensburg, it’s been in existence since 1431 or 579 years.  It’s right behind city hall and we were delighted to seek some shade in the plaza in front of the restaurant.
Nuremberg is indeed famous for their particular kind of bratwurst.  These bratwursts were considerably smaller than the Regensberg brats had been.   They are only about 3 to 3 ½ inches in length.  The major difference is not in the size, however, but in the flavor.   They’re pork-based but seasoned with fresh marjoram which makes them very distinctively different from the milder, meatier Wurstkuchl brats.  They’re served in sets of six, eight, ten or twelve along with either sauerkraut or potato salad and a dollop of mustard. We five shared two plates of them, along with glasses of cold beer and rosé, a nice respite on yet another warm June day.  The weather on this trip has been spectacular start to finish!
Once again, we boarded our coaches for a half hour trip to Erlangan, seeing a more modern Germany along the way. Once back on board it was time for a farewell cocktail and dinner. And wouldn’t you know it, the night owls held their final dance party where, although I haven’t a photo to prove it, I saw some of them dancing on the tables.  And no one even stopped them.
I will be doing one final post entitled: “The Ten Best Things about Viking River Cruises” so please come back Thursday when I will have it up and running.   All best to all my fellow “Tor” passengers.  I will never forget you.
Author: Monte Mathews
Filed Under: Bratwurst Roslein Nuremberg., Cruise Travel, Cruise Travels, Day Eight Viking River Romantic Danube, Nuremberg Viking River Cruises, Reviews of Viking River Cruises, Viking River Cruises Post 10
Day Five: Wachau Valley and Melk Abbey aboard Viking River Cruise’s "Tor"
Top 10 Best Things about a Viking River Cruise