Here’s true comfort food that you can play with to your heart’s content.  It’s virtually impossible not to make something warming and filling out of this recipe because the recipe is as flexible as can be.  It’s also a great way to empty the fridge, use up ends of cheese and experiment with flavors you make up as you go along.  That’s basically how I put this dish together.  All you really need is 1 lb of ground beef, an onion, a 28 oz. can of tomatoes, a box of pasta of and a cup and a half of soft cheese that melts easily plus enough parmesan to sprinkle over the top.  And the whole thing comes together in under an hour.  Let’s proceed, shall we?
The brutally cold weather we’ve been having has a positive side effect: you can indulge in warming, comforting dishes like this with minimal guilt.  And this one allows you to poke around in your refrigerator and customize your pasta bake.  I found some store-bought pesto, the tale end of a piece of salami and then there was the cheese.  While mozzarella would be traditional, I discovered that some shredded cheddar and a few slices of provolone gave a real twist to the taste.  You could also use Fontina or Gouda or Havarti.  The pesto was another refrigerator find and a good one too.  I spooned it over the meat sauce to concentrate its flavor.  Instead of the pesto, your fridge might hold some sun-dried tomatoes that you could chop up and toss into the sauce. Or spice that sauce up with leftover Salsa of any heat level. If you have a fennel bulb, dice that into the meat sauce too.  Finally there’s the pasta itself; Shells or Fusilli or Orecchiette could all be used. I chose Meza-Rigatoni.  Regular Rigatoni would be fine but choosing a smaller pasta means the meat sauce is more integrated into the dish. All in all, I invite your creativity.  But if you must be a slave to a recipe, here it is:
Baked Pasta with Pesto, Cheese and Meat Sauce
Serves 4-6
1 tbsp. Extra Virgin Olive Oil
1 Onion, chopped
1 lb. Ground Beef
1 28 0z can of Chopped Tomatoes
2 tsp. Salt
1/2 cup Store-bought or Homemade Pesto
1 12 oz. Box of Pasta
8 oz. of grated soft, mild cheese
½ cup grated Parmesan.
Pre-heat oven to 400 degrees.
Spray or butter a large baking dish (about 9 x 13 inches)
In a large stainless steel frying pan, heat the oil over moderately low heat.  Add the onion and cook, stirring occasionally, until the onion
starts to soften but not brown.  Break the ground beef into pieces and add it to the onions.  Cook until the beef is no longer pink, about 5 minutes. 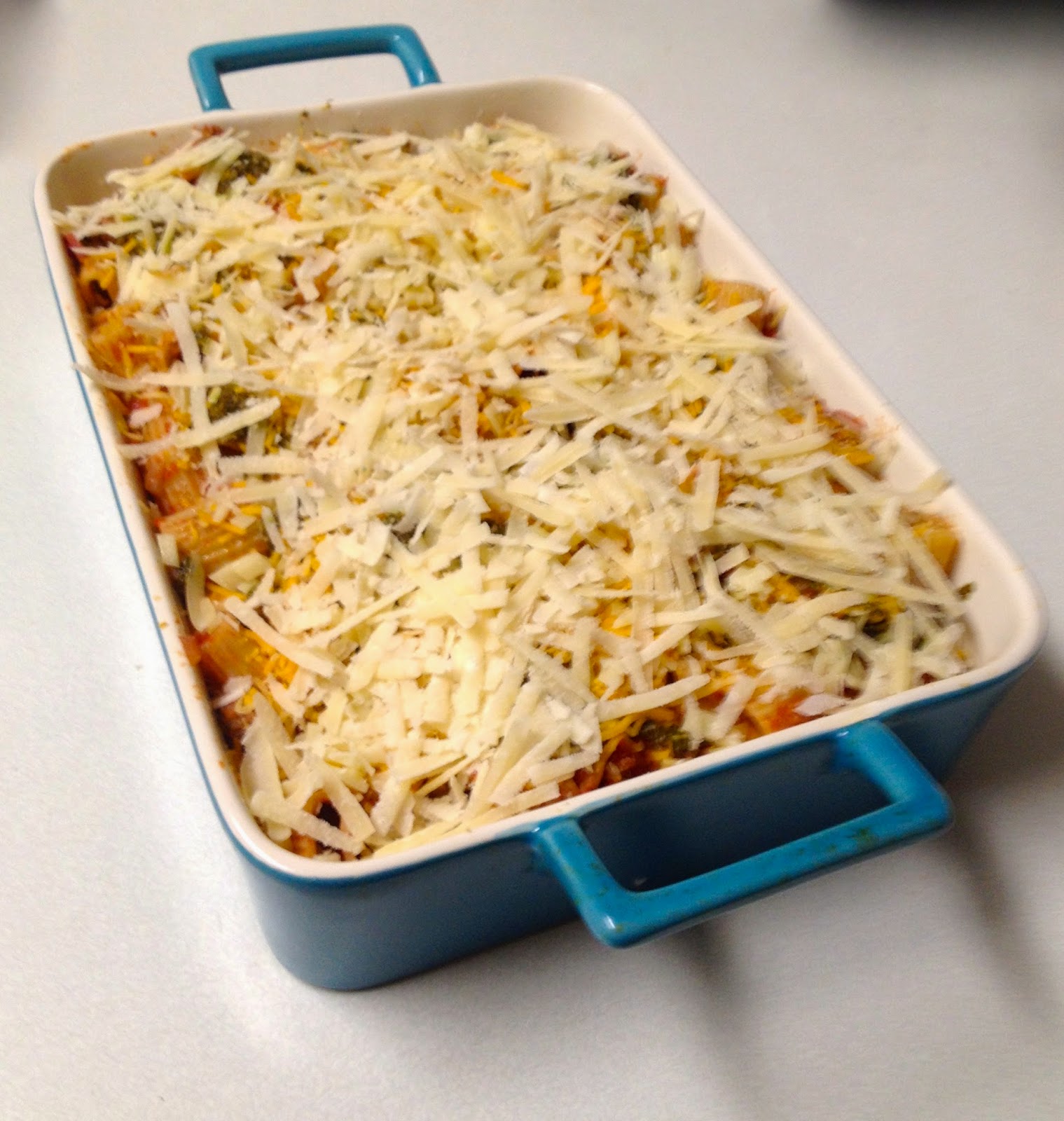 Add the tomatoes and salt to the pan and bring the mixture to a simmer. Cook until most of the liquid evaporates, about 10 minutes. Remove the pan from the heat.

Meanwhile, in a large pot of boiling, salted water, cook the pasta following the package instructions for al dente pasta. Drain and then add the pasta to the sauce, stirring to incorporate it.
Put half the sauce mixture into the prepared baking dish.
Put dollops of pesto over the pasta and sauce.  Then top with half the soft cheese and half the parmesan.  Repeat with the remaining pasta, sauce, pesto, soft cheese and parmesan.   Bake until bubbling, about 15 minutes.  You can also assemble the dish and hold it until half an hour before dinner but having cooled, it may take a little longer in the oven.  Serve with a green salad and some crusty bread if you’d like.
Author: Monte Mathews
Filed Under: Baked Pasta with Pesto, Beef, Cheese and Meat Sauce, Comfort Food, Ground Beef, Italian American Cooking, One Dish Pastas, Pasta, Weeknight Dinners Beef, Winter Dishes
Two Clarks and Porchetta for Days: An unforgettable Pork Roast and a Cannellini Vegetable Soup from the leftovers.
Peposo, Tuscan Beef Stew