Today is Chewing the Fat’s 5th Birthday!  Five years ago this very day we published our very first post!  We’ve been hard at it ever since.  Now, 526 posts and over 900,000 (!) page views later, we are celebrating this milestone with a request: Will you please go to the bottom of this page and tell us what you’d like to see more of, what you’d like to hear less of, and what we can do to make you want to come back time after time.  We really appreciated your viewership and we’d really appreciate hearing from you!  Happy Birthday!
It may come as a huge surprise to you, as it did to me, to know that the #1 most viewed recipe on Chewing the Fat is one for James Beard’s Roast Beef Hash.  (See https://chewingthefat.us.com/2012/01/james-beards-roast-beef-hash.html) With 16,439 page views, this recipe continues to be searched for on a daily basis.  To me this says three things: 1. Great recipes never die with the Chef who created them. 2.  There is clearly an extraordinary amount of leftover roast beef in this county at any given moment. 3. And despite the fact that the finished dish is almost impossible to photograph looking appetizing, its looks are no barrier to its popularity. 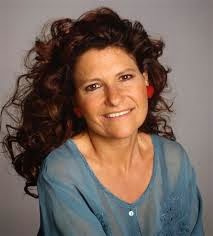 With such a huge success on our hands, you’d think I would have abandoned any thought of trying to find another hash recipe at all.  However, I considered it a challenge to try to top or at least equal James Beard’s version.  That and the fact I too had a lot of roast beef leftover from a Prime Rib. Besides, Andrew positively loves hash.  Then I found a recipe from the late, great Sheila Lukins and gave it a go. The results were another hash that was in many ways as good as Beard’s and, with its colorful vegetables, a good deal more photogenic. 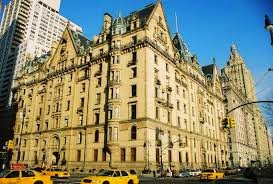 Sheila Lukins will always occupy a place in my heart if only for the fact that she lived about 4 blocks from where I do in New York City.  She was a resident of The Dakota, a fabled New York apartment building that also has the unfortunate distinction of being the place where John Lennon, who also lived there, was shot at its front door. The Dakota got its name because when it was built, it was so far north of the city center, it might as well have been in the Dakotas.
Early in James Beard’s career, he capitalized on the Cocktail Party craze by starting a company called “Hors d’oeuvres Inc.”.  Sheila Lukins capitalized on her understanding that the increasing number of women in the work force needed a hand in the kitchen.  With a partner called Julee Rossi, she opened a take-out shop right near her home on the Upper West Side called “The Silver Palate”.   There she sold very boldly seasoned food to an audience, which, in the 1970s was in the throes of a health-food movement devoid of the rich flavors Ms. Lukins and Ms. Rossi had on offer.  The pair also wrote cookbooks, which sold more than seven million copies.   A feud ended the partnership and the store was first sold and then closed in 1993.  Having suffered a debilitating stroke in 1991, tragically, Ms. Lukins was stricken with brain cancer in 2009 and died two months later at age 66.  Her recipes survive and her cookbook is still one of my go-to sources for great home cooking. 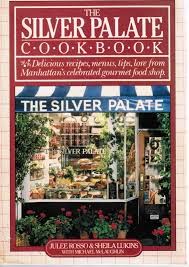 Sheila Lukins’ Roast Beef and Vegetable Hash is one of those recipes.  Here she combines russet potatoes, bacon, onion, red and green peppers with leftover roast beef.  The ingredient I did not expect to find was Orange Zest but that may very well be the flavor note that ‘makes’ the dish.  There’s a great deal of chopping involved here and if you are lucky enough to have a sous-chef on hand, you will be grateful for their participation.  If not, it’s not an impossible task but everything is diced in ¼ to ½ inch pieces.  Topped with a poached egg, it’s a wonderful supper for six, although since we are only two, I had leftovers, which I served for brunch a few days after our dinner.
Here is the recipe.
Recipe for Sheila Lukins’ Roast Beef and Vegetable Hash
Prep Time 20 minutes. Cooking Time 20 minutes. Serves 6. 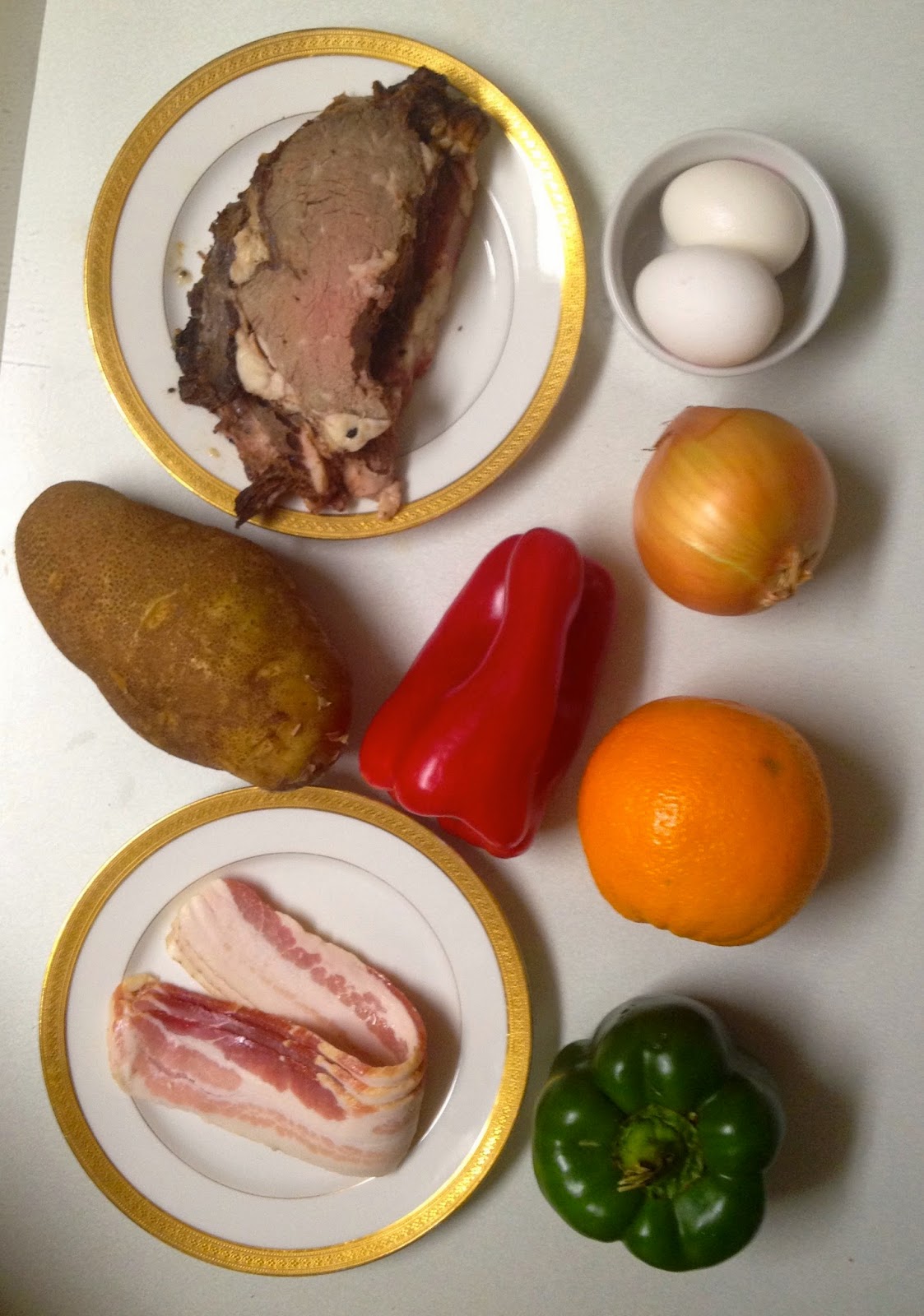 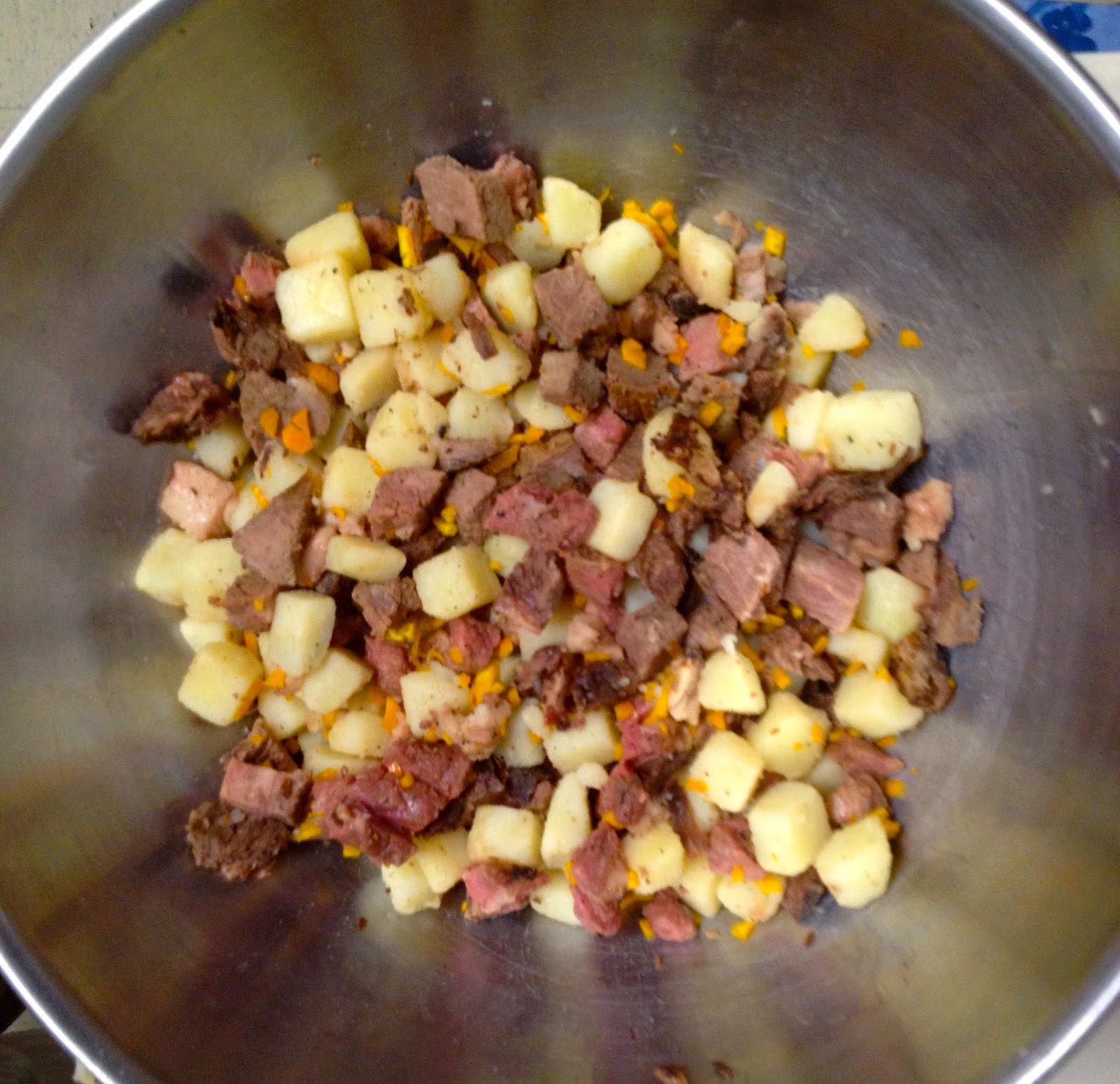 1. Cook the potatoes in boiling salted water until tender, 8 minutes. Drain and place in a large bowl with the beef. 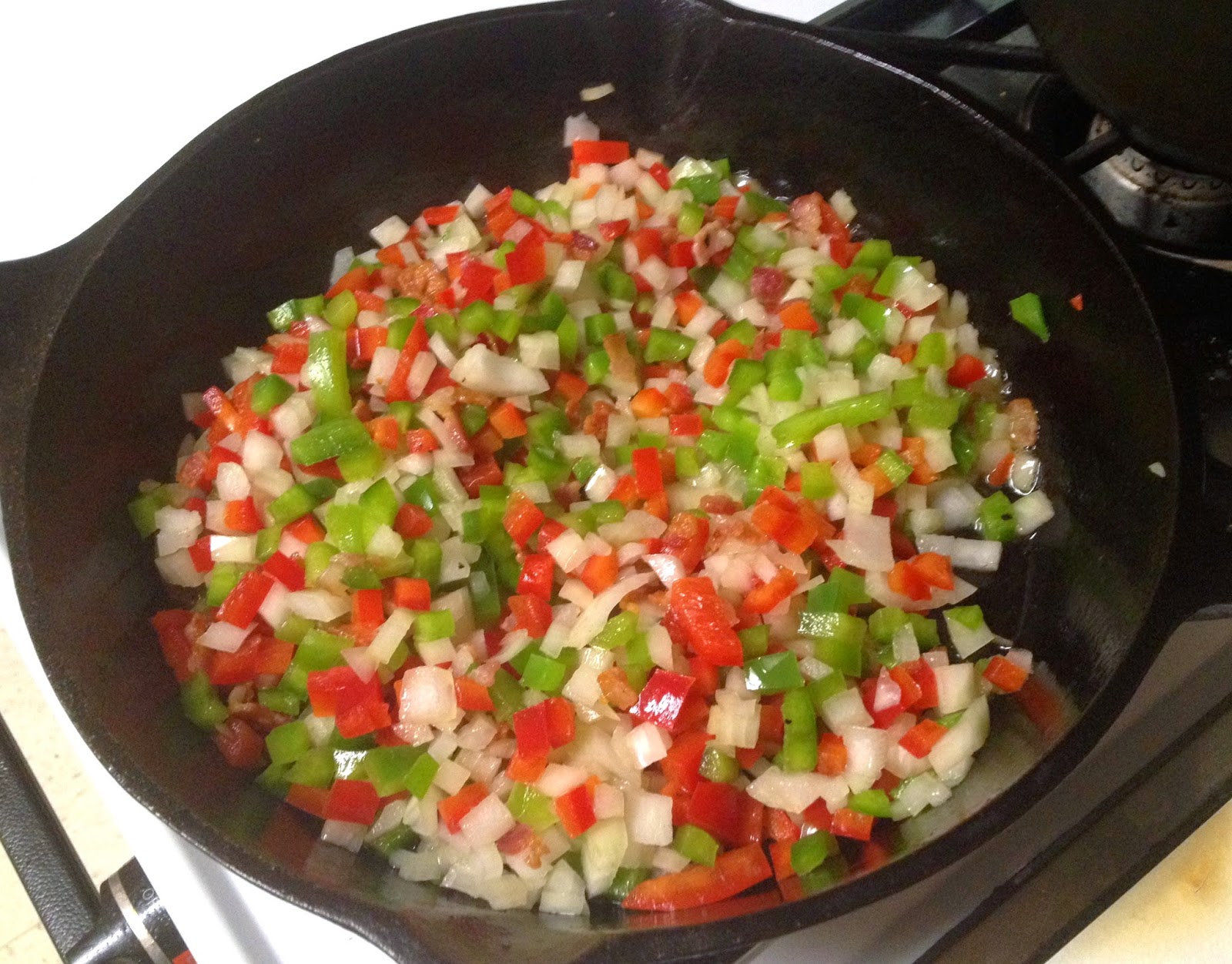 2. Cook the bacon over medium heat to render the fat, 5 minutes. Add the onion and bell peppers; cook, stirring, for 5 minutes. Remove with a slotted spoon and add to the potatoes and roast beef, along with the nutmeg, salt, pepper, orange zest and 2 tablespoons of the parsley. Toss. 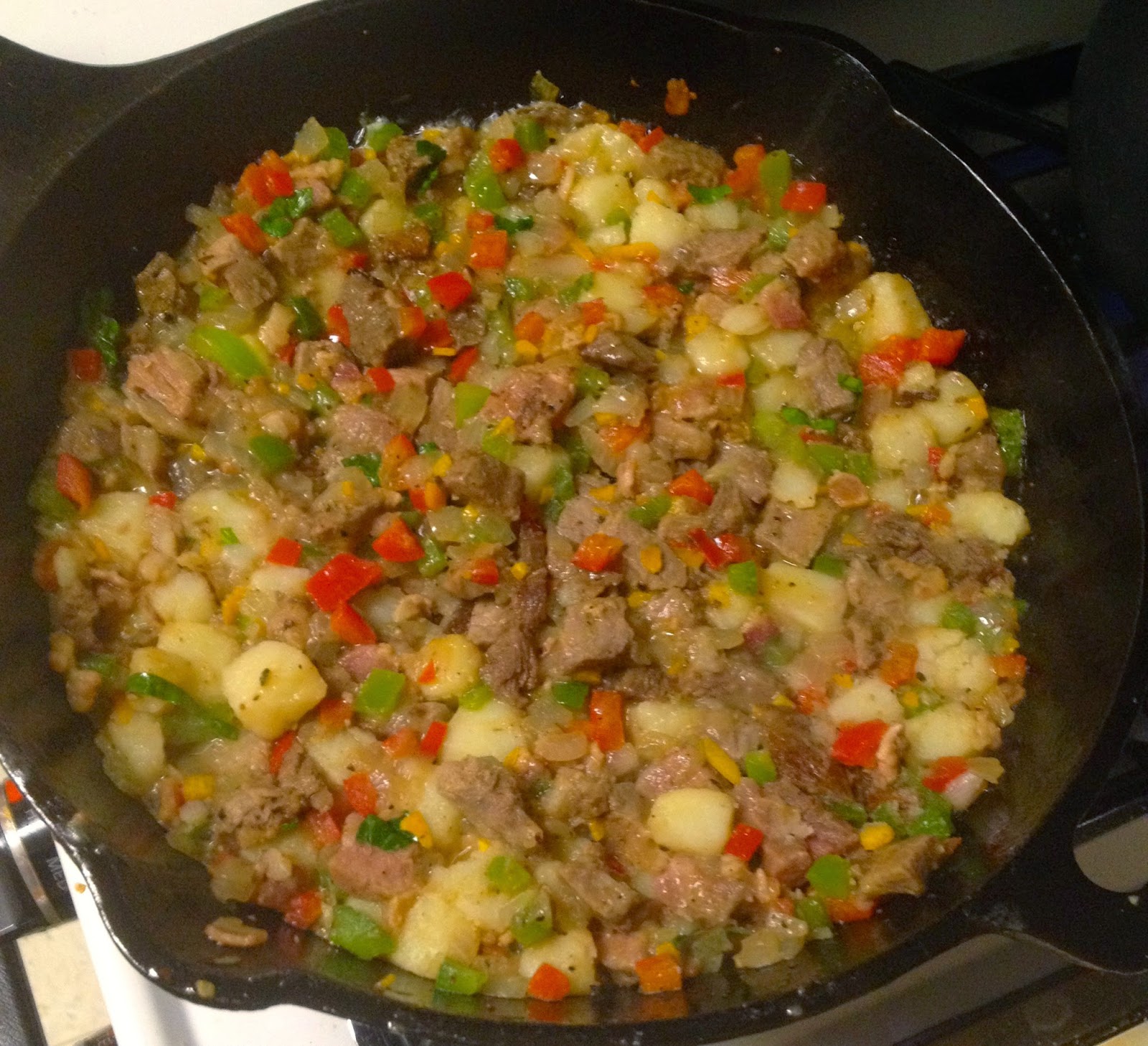 3. Spread the hash mixture evenly in the skillet and weigh it down with something heavy, like a smaller skillet. Cook over medium-high heat until golden brown on the bottom, about 5 minutes. Turn the hash over with a spatula and cook until golden brown, 5 to 7 minutes. 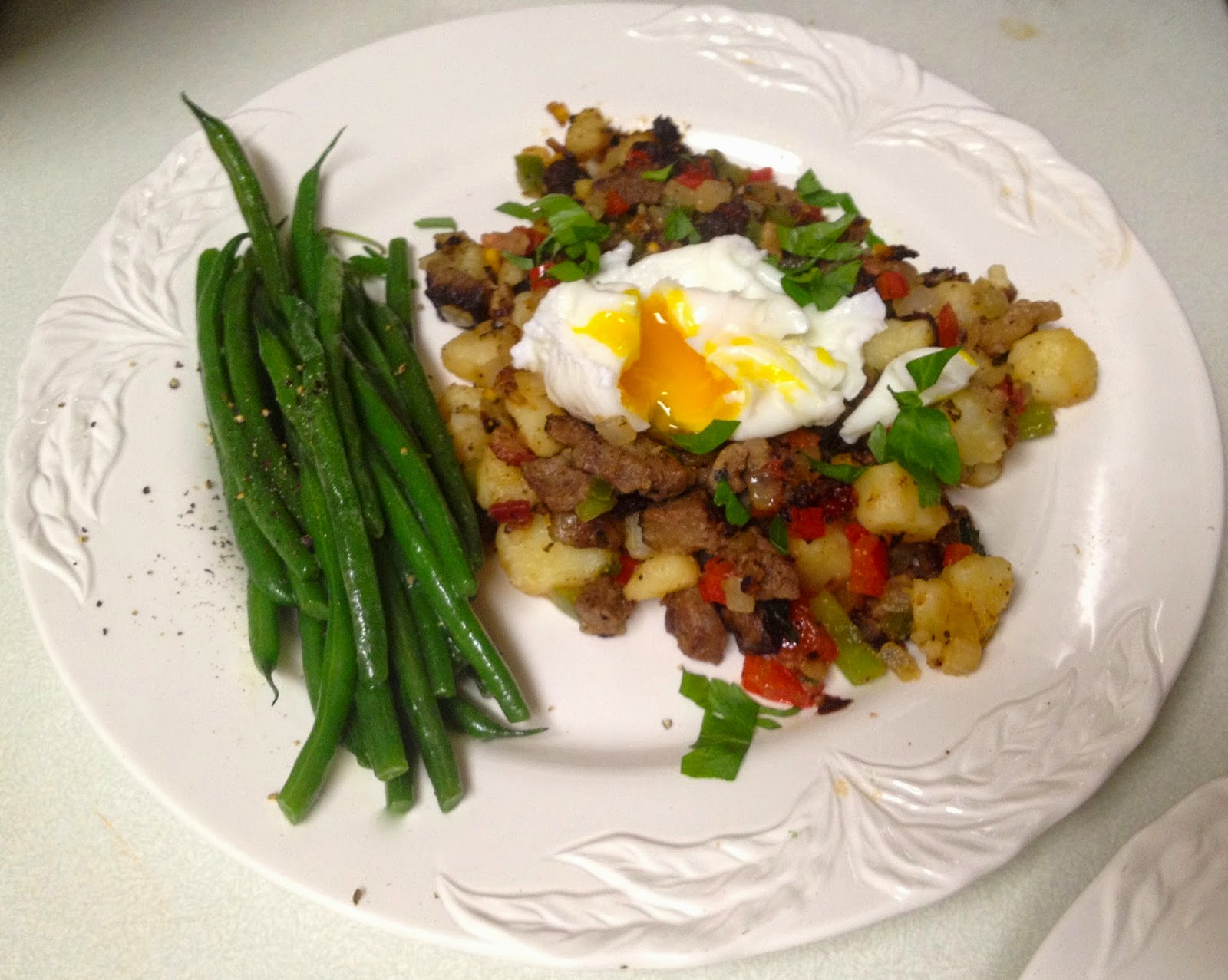