In our bid to eat healthy, Chinese food has taken quite a hit. We never order it for takeout.  And our visits to Chinese restaurants are few and far between.  But take heart.  We have discovered how easy it is to make Chinese food at home.  Not only does this keep the exotic flavors on our table from time to time, it also solves a lot of the issues we’ve had with the food to begin with.  Despite last week’s news that salt might not be all that bad for you, Chinese cooking packs extraordinary levels of the stuff.  The current recommended daily intake of sodium is 2300 mgs. Or about a teaspoon.  A restaurant serving of General Tso’s chicken comes in at 3200 mgs. And, at 1300, more than half the calories that an adult is supposed to consume all day (2000).  That’s before you added an egg roll, which will send the sodium count up another 400 mgs. and the calorie count up another 200.  So much for the General’s chicken. But surely Chinese vegetables are healthy?  Not so fast.  A plate of stir-fried greens comes in at 900 calories, eggplant in garlic sauce, 1000.  Then there’s MSG, monosodium glutamate, which has had a bad rap since the 60s when it was associated with “headaches, flushing, sweating, numbness, chest pain, nausea, heart palpitations, and weakness” according to Yale Scientific (www.YaleScientific.org). It was even called “Chinese Restaurant Syndrome”.  However, according to YS, “researchers have not found any conclusive evidence that links MSG to any of these symptoms, though it is acknowledged that a small minority of people may have mild, short-term reactions to MSG.”  So there!

When you cook Chinese food at home, you can better control the sodium and fat content of your food.  You can rest assured that you could post “No MSG” on your kitchen wall because you can ban the stuff all by yourself.  Take this recipe for Mu Shu, one of items I’ve missed most since we went our Chinese food fast.  Mu Shu only came to this country in about 1966, and it’s attributed to a “Pearl’s”, an Iconic Chinese Restaurant that kept its kitchen Cantonese when the wave of Hunan and Szechuan restaurants started opening up.  40 years later, I still remember going there.  Pearl Wong was the extremely chic owner who greeted every guest, most of whom she knew by name.   Pearl’s was almost as famous for its interiors as it was for its food.  Pearl and her husband James, hired the architects, Charles Gwathmey and Robert Siegal to design a modernist temple to Chinese food.  It was a stunning place. Sadly I cannot find a single picture of it nor can I find one of Pearl Wong who died in 1997.

Now back to the Mu Shu.  The dish is credited to Shandong province in Northern China.  It’s morphed quite a bit in its time.  Once made with Wood Ear Mushrooms and Day Lily buds, its been transformed to include Green Cabbage and Carrots. Very often, packaged cole slaw is pressed into use as it is here.   And in a burst of multi-culturalism, many Chinese restaurants now use Mexican flour tortillas in lieu of the Mu Shu pancakes called bao bing.  These changes make home made Mu Shu a breeze.
Finally there’s the matter of the

meat.  I prefer using Pork.  When I make a big pork roast like the one I used in David Chang’s Bo Ssam,(www.chewingthefat.us.com/2012/02/what-to-serve-for-chinese-new-year.html)  I always shred the leftovers, freeze them and pull them out just for uses like making Mu Shu. However, Mu Shu Chicken is an even easier dish to make because you can rely on 2 ½ to 3 cups of shredded rotisserie chicken.  And if you’re a mad Mu Shu fan, you can even use shrimp if you’d like.  Altogether, as you can see, finding the ingredients to make Mu Shu in Moments won’t take too much searching in your supermarket.  Here is the recipe: 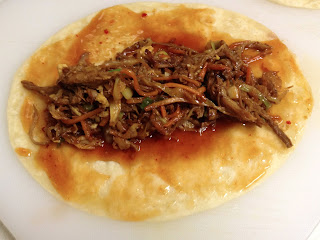 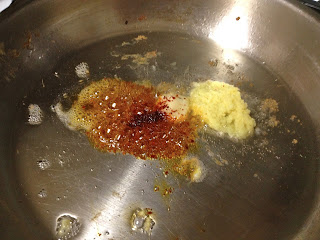 Add remaining 3 tablespoons oil to skillet and heat until hot but not smoking, then cook ginger, garlic, and red pepper flakes, stirring, until garlic is golden, about 1 minute. 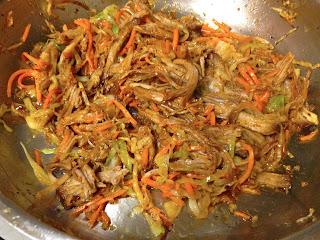 Add coleslaw mix and 2 tablespoons water and cook, covered, stirring occasionally, until coleslaw is wilted, about 5 minutes.
Stir together soy sauce, sesame oil, remaining 2 tablespoons water, and hoisin sauce in a small bowl. Add to coleslaw mixture along with scallions and eggs and cook, stirring, 2 minutes. Add cooked shredded pork, chicken or raw shrimp. Cook until heated thorough, about 3 minutes. Remove from heat. Immediately put tortillas between 2 dampened paper towels on a microwave-safe plate and microwave on high power until tortillas are hot, about 1 minute. 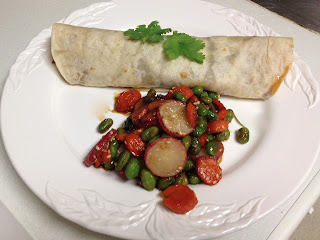 To assemble, spread hoisin on each tortilla and top with mu shu mixture, and scallions, then roll up.