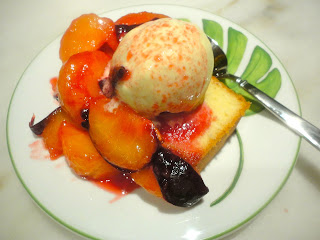 Our friend Michael of The Bridgehampton Florist, comes from a family of home bakers whose cakes are consistently the best things we’ve ever tasted.  We’ve featured the most famous, “Beatty’s Chocolate Cake” https://chewingthefat.us.com/2010/07/beattys-chocolate-cake.htmlwhich made its print debut in Ina Garten’s “Back to Basics” a couple of years ago.  Andrew had baked any number of recipes and they’ve all been good.  But at an Event last summer, Andrew tasted Michael’s Mother Lorraine’s version for the first time and he had to have the recipe for what is The Perfect Pound Cake.   And let’s face it, a great pound cake is the starting point for all kinds of wonderful desserts.  Topped with fruit, it’s the sweet contrast underneath.  Add a little ice cream and you have the warmth of the cake, the cool creamy richness of the ice cream and the tart tang of the fruit all together in a spoonful of heaven.  You can do so many things with pound cakes, that I counted 50 variations on epicurious.com alone!  So it stands to reason, that once you’ve learned the secrets to the perfect pound cake, you open up a whole dessert repertoire.

Although Andrew is the baker par excellence in our household, pound cake and I go way back.  Some years ago, I created an ad campaign for Sara Lee called “From the Kitchens of the Real Sara Lee”.  There was such a person.  Sara Lee’s father named his bakery after his 8-year-old daughter.  By the time I met her, she was a very distinguished philanthropist who continued as a paid PR spokesperson for the company long after her family had sold it.  She would be trotted out at Sales Meetings and Consumer Events.  She seemed to relish her role and the Armani wardrobe that came along with it.  You may recall the line “Nobody doesn’t like Sara Lee” but I can tell you one person who didn’t. Sara Lee hated the products, which had been de-fattened and cost cut to the point of unrecognizability from her father’s original recipes. And she told everyone within hearing distance.  There’s a famous expression in the Ad business: “Shut Up and Shoot”, which is what she did, and what we did.

For the pound cake, we devised a very simple recipe.  It had to be.  The commercials lasted just 15 seconds start to finish.  In the pound cake version, I seem to remember that we sliced the cake into two layers, put strawberries and Ready-Whip between them and voila, dessert in under 15 seconds.   The only other memory I have of that particular exercise was the suggestion to use dental floss to do the cutting of the layers.  Don’t ask me why.  At any rate, the client tired of the wardrobe allowance and the astronomical travel expenses incurred by Ms. Lee who hit every 4 star restaurant everywhere she went.  She loved her celebrity status and would insist on being introduced to the Chef everywhere we ate.  I remember a very puzzled Nobuyuki Matsuhisa who clearly had not a clue who she was when she had him dragged over to our table.  But at least I got to meet the great Nobu.  But I digress.

Traditionally, pound cake was made with one pound of each of four ingredients: flour, butter, eggs and sugar. Of course this would make an enormous pound cake.  So Michael’s Mother’s recipe is scaled down, uses both butter and butter flavor vegetable shortening; The last item is absolutely key to this cake.  Do not even attempt to make it without it.  There’s also one major ingredient that the original ‘pound’ cake recipe omits. There’s a cup of whole milk that’s added to the batter.  Then the cake is put into a Bundt cake pan and baked.  The Bundt pan makes a very pretty cake but if you don’t have one, you can use 2 loaf pans and you’ll have two cakes: one to serve immediately and one to freeze because this cake freezes exceptionally well.  Now you can either stop here or you can continue and make the lemon pound cake as pictured.  Either way, once you’ve mastered the pound cake, you’ve really got dessert mastered too.  Here is the recipe:
Recipe for Perfect Pound Cake courtesy of Michael and his Mother:
1/2 lb. unsalted butter
½ cup Butter-flavored Crisco (accept no substitutes!)
3 cups Sugar
5 large eggs
1 cup Milk
1 tsp. vanilla
3 cups flour
½ tsp. salt
¼ tsp. baking powder 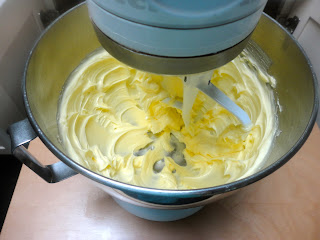 Cream the butter and butter-flavored Crisco in the bowl of a standing mixer.

Add the sugar and continue creaming.
Add one egg at a time. 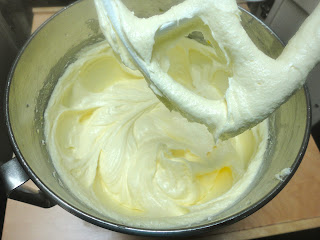 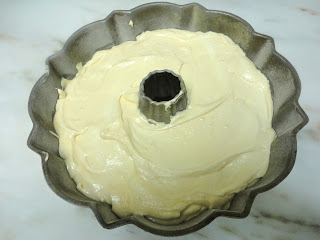 Put the batter into a Bundt pan or two loaf pans which have been sprayed with Baker’s Joy. 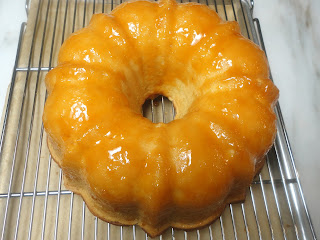