Our god-daughter Olivia just turned 13 this month.  That’s a milestone in any girl’s life.  It’s also a pretty big one in ours too.  Andrew and I went to see her the day she was born and she’s been a big part of our lives ever since.  She’s grown into someone we are so proud to call our own.  She’s lovely, poised, and talented.  She has manners that would make any parent proud.  And she’s a sheer delight to be around.  So it’s only natural that Uncle Andrew would go all out for this year’s festivities.  He baked two kinds of Whoopie Pies for her all-girl Birthday party and we’ll get to those in a future post. But  today I wanted to share the every-girl’s-dream-cake that he made. You see, Olivia gets a festival of birthdays.  There’s one for her friends. There’s one with her family.  And there’s one we call “The Uncle’s Birthday” which is where Andrew and I join forces with Olivia’s other uncles, Shawn and Terry, and celebrate.  And that’s where the Pink Cake appeared.  But before we get to the cake, a few words about pink.

Now, Olivia is a pink girl and has been for a long time.  That’s not to say that, fashionista that she’s become, she wears nothing but pink.  Far from it.  But if a color ever summons up sweet, pink is it.  But “pink is for girls and blue is for boys” is a surprisingly recent idea. 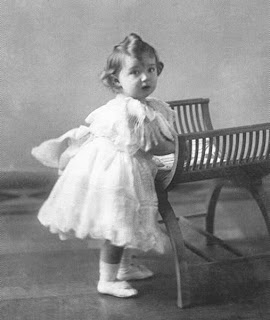 Until the turn of the century, baby clothes for boys and girls were interchangeable and most often white.  In fact, telling infant sexes apart was  a challenge.  Ruffles and lace adorned baby clothes and the higher the social standing, the more elaborate these became. These pictures show the Russian Royal infants.  Can you tell which is a boy and which a girl?  Well, neither of them are girls.  The photo on the right is of Tsarevich Alexei. The one next to it, shows his father and his grandmother.  And Russians were hardly alone in their devotion to dressing up little boys.  Below is a picture of our 32nd President, Franklin Delano Roosevelt, in 1884, aged 2.  It wasn’t until the 20th century that baby clothes came in colors.  And when they did, things were a little topsy-turvy to today’s sensibilities.

In June 1918, Ladie’s Home Journal told its readers: “The generally accepted rule is pink is for the boys, and blue for the girls. The reason is that pink, being a more decided and stronger color, is more suitable for a boy, while blue, which is more delicate and dainty is prettier for the girl.  Then in 1927, Time magazine published a chart of sex-appropriate colors for girls and boys. They based their findings on what leading US retailers had told them:  Filene’s in Boston, Best and Co. in New York, Halle’s in Cleveland and Marshall Field in Chicago all told parents to dress their boys in pink. It wasn’t until the 1940s that babies began wearing gender-specific clothing at all.  Boys were dressed like their fathers, girls like their mothers.  According to the Smithsonian Institute, the color selection could have gone either way but it did shift to making blue for boys and pink for girls. Now back to the Pink Cake. 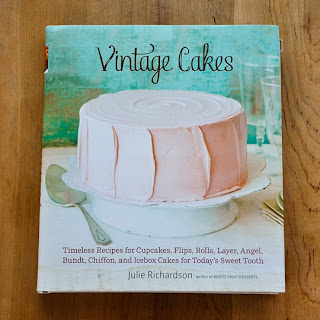 Uncle Shawn took one look at Andrew’s creation and said it looked ‘vintage’ to him.   He hit the nail on the head.  The recipe for the cake came from a book called “Vintage Cakes” (10 Speed Press, Berkeley).  Its author, Julie Richardson comes from that hotbed of great food, Portland, OR where she is the head baker at Baker & Spice. (6330 SW Capitol Highway, Portland OR 97239.  Tel: 503-244-7573).  Julie decided to create a cake cook book full of old favorites which she gathered by selecting treasures from old cookbooks and recipe cards.  But when it came time to bake the Pink Cake, it was a pure Baker and Spice Original.  There’s nothing girly about the flavors: the deep chocolate layer cake is moist and rich.  But the thing that really stands out is the buttercream frosting.  Not the result of one bit of dye, the buttercream gets both its color and its flavor from a raspberry puree!.  It’s a wonderfully light frosting. In fact, the whole cake is amazingly light yet full of fruit and chocolate flavor. And if two tastes were meant for each other, you have to go a long way to find a better pair than chocolate and raspberry.  Here’s the recipe: 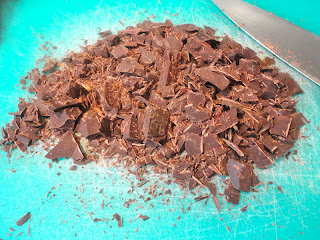 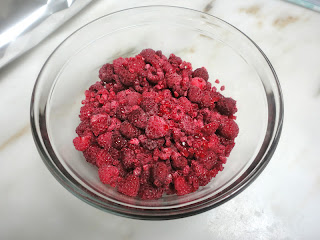 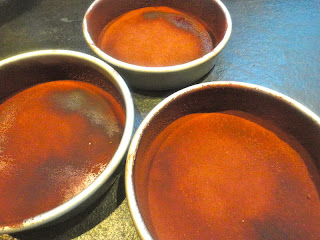 Center an oven rack and preheat the oven to 350 degrees. Grease three 8-by-2-inch round cake pans, line with parchment paper circles and grease the paper. (Instead of then lining the cake tins with white flour, Andrew then coats them with cocoa powder, a trick he learned from fellow baker and professional chef, Mark Sanne. The cakes then are completely chocolate. 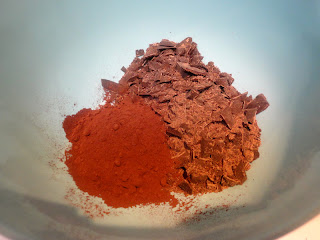 To make cake: Put the unsweetened chocolate and the cocoa into a small bowl. Pour the boiling water over the chocolate and allow it to steep for 1 minute. 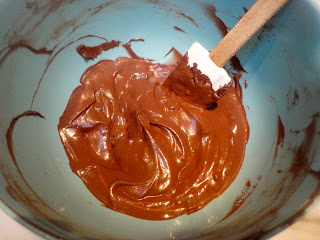 Whisk the mixture together. Whisk in the sour cream and vanilla. Set aside. 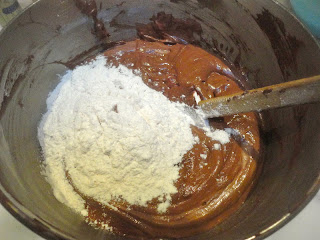 Sift together the flour, baking soda and salt in a bowl, then whisk the mixture by hand to ensure that the ingredients are well-mixed. 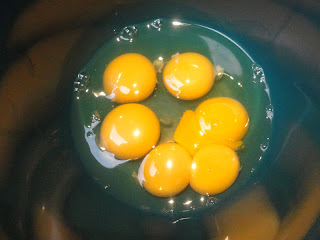 In the bowl of a stand mixer fitted with the paddle attachment, cream the butter and both sugars together on medium-high speed until light, about 3 minutes. As you make the batter, stop the mixer frequently and scrape the paddle and the sides of the bowl with a rubber spatula. On low speed, drizzle the oil into the mixture until blended. Turn the mixer up to medium-high speed and beat until the batter is fluffy, about 3 more minutes. Blend in the eggs and egg yolks one at a time, adding the next one as soon as the previous one has disappeared into the batter. With the mixer on low speed, add the flour mixture in three parts, alternating with the chocolate mixture in two parts, beginning and ending with the flour. After each addition, mix until just barely blended and stop and scrape the bowl. Stop the mixer before the last of the flour has been incorporated and complete the blending by hand with a rubber spatula to ensure you do not overbeat the batter. 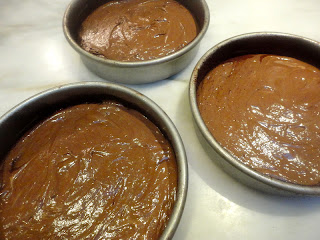 Divide the thick batter equally among the prepared pans. (There will be approximately 1 pound 2 ounces per pan.) Smooth the tops and tap the pans on the counter to settle the batter and eliminate any large air bubbles. 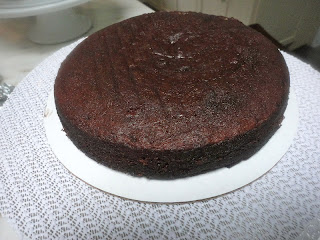 Bake in the middle of the oven until the centers spring back when lightly touched, 22 to 25 minutes. Cool the cakes in their pans on a wire rack for 30 minutes. Flip the cakes out of the pans, leaving on the parchment paper until you assemble the cake. Let them continue to cool on the rack, top sides up, until they reach room temperature.

Store the cake in an airtight container at room temperature for up to 3 days. 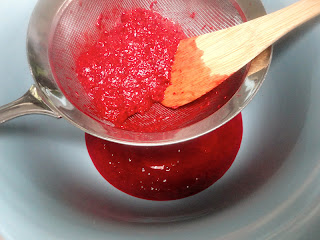 Mash and strain raspberries through a fine mesh sieve to catch the seeds. (If using frozen berries, measure them before thawing.) Discard the seeds and set aside the purée. 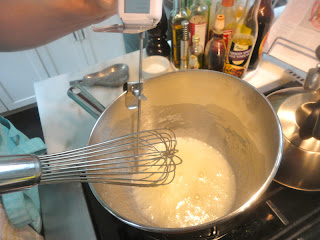 Using a hand whisk, whisk together the egg whites, sugar and cream of tartar in the clean bowl of a stand mixer. Place the bowl over (not in) a saucepan of simmering water. The egg white mixture will be gloppy and thick, but as the mixture begins to warm up, it will become more fluid. Continue to gently whisk the mixture until it is very hot to the touch (130 degrees on a candy thermometer). 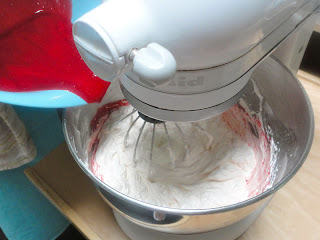 Move the bowl to the stand mixer and, using the whisk attachment, whip the whites on medium-high speed until they have tripled in volume and are thick and glossy and hold stiff peaks (like meringue), 3 to 4 minutes. Turn the mixer down to medium-low speed until the mixing bowl is just cool to the touch, 1 to 2 minutes. Kick the mixer back up to medium-high speed and add the butter one piece at a time, adding the next piece just as the previous one has been incorporated. Stop the mixer every so often to scrape down the escaping buttercream from the sides of the bowl. At some point, the buttercream will take on a curdled appearance; don’t worry, this is normal. Just keep on mixing until it comes together. Once all the butter is incorporated and the frosting is fluffy and creamy, blend in the vanilla, salt and raspberry purée until fully combined. 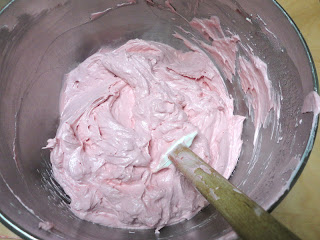 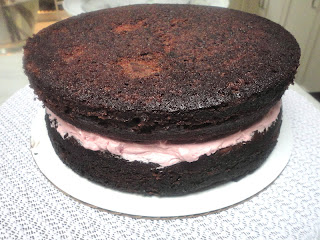 To assemble the cake, lay one of the cakes top side up on a cake plate. Using a metal spatula, frost the top with 3/4 cup of buttercream, spreading it out to the edge of the cake (the filling will be about 1/4 inch thick). Stack the second cake top side up atop the frosted cake and spread another 3/4 cup of buttercream on top of it. Stack the last layer of cake top side up on top. Look for any frosting that may have oozed out between the layers and spread it along the sides of the cake. 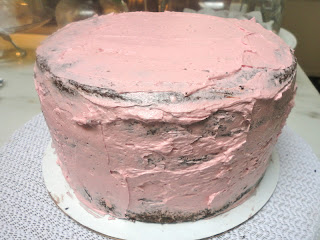 Apply a thin layer of frosting all over the cake to create a “crumb coat.” Place the cake in the refrigerator until the frosting is firm, about 10 minutes. 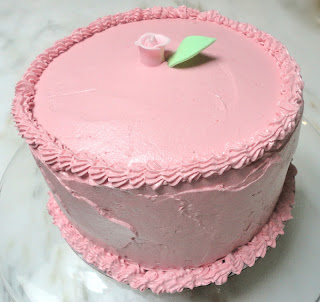 Take it out and frost the cake with the remaining buttercream, using your spatula to make decorative swirls.
The rosebud and the leaf were purchased at New York Cake and Baking Supplies at 56 West 22nd St. New York City.
You can store the cake in an airtight container at room temperature for up to 3 days.