Not My Mother’s Vichyssoise 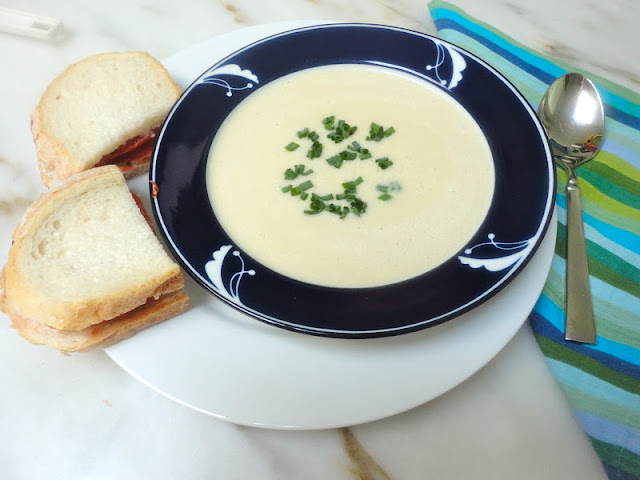 Cold Soup is ideal to have on hand in summer heat.  You can make this soup up, store it in the fridge and then take it out and finish it off for any occasion.  When houseguests first arrive, they’re inevitably exhausted from their trip and a bit peck-ish.  It’s nice to greet them with a glass this rich, creamy soup and perhaps a tomato sandwich made with farm stand tomatoes on thin-sliced white bread.  This simple welcome will bide them over until dinner.  You can make up a glorious gazpacho, truly fresh tomato soup or you can put a little French accent on the proceedings with this recipe for Vichyssoise, a completely American invention.

One of my strongest and earliest food memories is of my Mother’s Vichyssoise.  It is deeply associated with my first kitchen task, which was to go out to where we grew herbs, and cut the chives that inevitably floated on the top of our bowls of cool, creamy Vichyssoise.  The soup is simplicity itself to make involving only 5 ingredients including the salt.

Now anyone who knew my Mother would be very skeptical that she actually made her own Vichyssoise.  She was of the Campbell’s Soup School of Cooking, which held that if someone else made a perfectly reasonable bowl of soup that happened to come in a can, there was absolutely no reason for her to do so.  This led me to check our local supermarket to see if I could discover the source of my Mother’s version of the soup.  Much to my astonishment, they don’t make Vichyssoise. However, they do make Cream of Potato Soup so I think I did uncover the source of my mother’s recipe.  Because in truth, that’s pretty much what Vichyssoise is.

A recipe for a hot potato and leek soup dates back to a French chef called Jules Gouffé who then published a version in The Royal Cookery Book (1869).  Louis Diat, the chef at New York City’s Ritz-Carlton Hotel, claimed to enjoy that particular soup as a young child. In 1950, Diat told The New Yorker magazine: “In the summer of 1917, when I had been at the Ritz seven years, I reflected upon the potato-and-leek soup of my childhood that my mother and grandmother used to make. I recalled how, during the summer, my older brother and I used to cool it off by pouring in cold milk and how delicious it was. I resolved to make something of the sort for the patrons of the Ritz.”  Thus was born Vichyssoise, which the chef named after the spa town of Vichy close to Diat’s birthplace in France.  It’s the simplest of recipes and produces an absolutely flawless version of the soup—the flavor of the leeks is more pronounced than I ever remember in my Mother’s version but the cool creaminess brings back a flood of memories of the summer nights when we would eat dinner on our terrace watching the first fireflies come to life with the setting sun.   Here is the recipe: 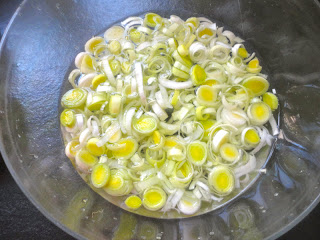 4 cups of thinly sliced leeks including only the white and tender green parts, carefully washed to remove all traces of sand.
1 3/4 cups of Chicken stock, or canned chicken broth*
1 tbsp. salt
1 cup of heavy cream
* Vegetarians feel free to use Vegetable stock but in my experience, chicken stock makes the best Vichyssoise.

For Serving:
Salt and White Pepper
2 to 3 tbsp. chives cut into ¼ inch lengths 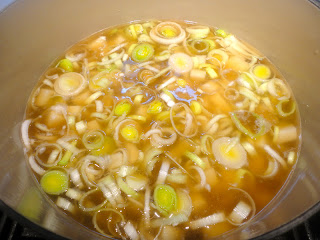 Put the potatoes and leeks into a large dutch oven. Add the chicken stock or broth.  Simmer the soup, partially covered, for 40 to 50 minutes until the vegetables are tender. 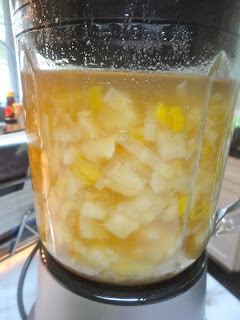 Puree the soup in the blender.  Then transfer to a large bowl.
Stir in the cream.  Season to taste remembering that salt loses its flavor in a cold dish.  Chill until soup is very cool. 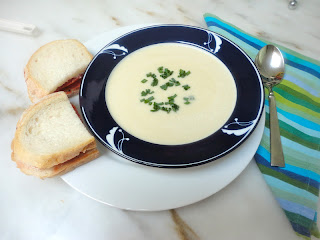 6 thoughts on “Not My Mother’s Vichyssoise”