A couple of years ago, I went on a Chicken Wing Diet.  It was about the time that New York restaurants were obliged to print the calorie count of their dishes on their menus.  In New York, with Mayor Bloomberg at the helm, we’ve gotten very used to the Nanny-state. And to tell the truth, it’s not all bad.  Smoking is virtually impossible—you cannot smoke anywhere indoors at any bar or restaurant or office building. You can’t even smoke in city parks or on its beaches. There even are apartment buildings that ban smoking altogether. Thank you Mayor Bloomberg.

Nanny-state behavior or not, to me the requirement to list calories really was an eye-opener.  There, clear as day, was the Chicken Caesar Salad weighing in at something like 1200 calories. But on the same menu the Baked version of Buffalo Chicken Wings with dressing and carrot and celery sticks came in at a mere 535 calories.   Anytime I can save 665 calories at a clip, I’m there.  Besides, I love the things.  The heat of the hot sauce dipped into the creamy blue cheese dressing, the crunch of the skin and tender meat underneath are irresistible.  And of course, the wings were way less expensive than the Chicken Caesar.  So I pretty much adopted them as my blue plate special from then on.  I also made them any number of ways at home. In the land of budget cooking, Chicken Wings take the prize. But none were ever as delicious as the ambrosial wing recipe cooked up by Atlanta’s Richard Blais, ex Top Chef All Stars winner and proprietor of a new Atlanta restaurant called “The Spence” (5th Street NW, Atlanta GA 30308 Tel: 404-892-9111. 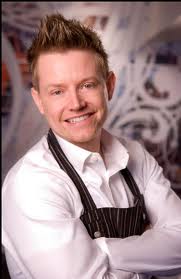 According to Food and Wine, where I found the original recipe, Richard was ‘exploring his British roots’ when he developed this recipe for wings.  Since I actually found a You Tube video of someone teaching Brits how to eat Chicken Wings, I think we can safely assume that the wings are the least British things about the recipe.  What makes them British is their use of Lemon Curd, the only brand of which I could find in our supermarket was Robertson’s (“By Appointment to Her Majesty the Queen Manufacturers of Cakes and Culinary Products”) made in Long Sutton, Spalding, Lincolnshire.  So there!  And then of course, there’s the addition, in the batter, of classic malty English bitter. That’s Malt Liquor to us Yanks. The recipe recommends Fuller’s London Pride.  I confess:  I got the Lemon Curd but I was perfectly happy using ½ cup of Heineken in lieu of the Bitter.  And my other diversion from the original was that it called for ½ cup of rice flour and ½ cup of all-purpose flour.  I used 1 cup of all-purpose flour.

Despite my alterations to the original, these wings are off the chart.  The sauce, which is key to the whole dish, manages to be sweet and salty, not blazingly hot at all, lemon-y but not acid-y, and as pepper-y as you want to make it.  The wings, I am not sorry to tell you, are fried.  They are therefore crispy, crunchy pieces of everyone’s favorite: Fried Chicken. These wings are so good, they need no help from blue cheese dressing or carrot and celery sticks. And fortunately, there’s been no crack down on magazines for not listing calorie counts with their recipes.  There is a limit to what even Mayor Bloomberg can do. Here’s the recipe: 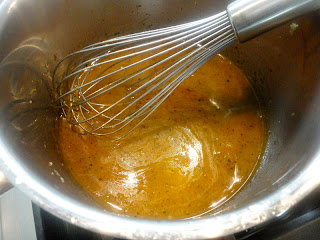 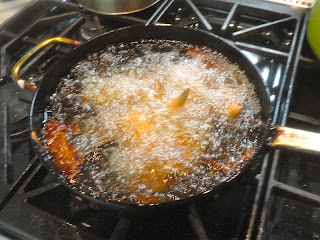 .In a saucepan, heat the olive oil
Add the garlic; cook over moderate heat until fragrant, 1 minute. Whisk in the lemon curd, lemon juice and 1/4 cup of water and bring to a boil. Off the heat, stir in the hot sauce and pepper
In a large bowl, whisk both flours with the cornstarch. Add the seltzer and beer; whisk until smooth. Season with salt. Add the chicken wings to the batter and turn to coat..

In a large saucepan, heat 2 inches of vegetable oil to 350°. Scrape the excess batter from the wings. Working in batches, fry the wings in the hot oil for 3 minutes, until the crust is just set and pale golden. 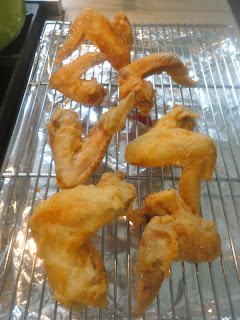 Drain on a wire rack and air-dry for 10 minutes. 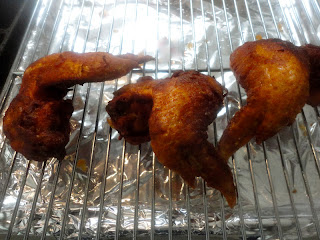 Return the oil to 350°. Fry the wings a second time, in batches, until deep mahogany in color. If you have any doubts about doneness,  an instant-read thermometer inserted in the thickest part should register 170°,  after 5 to 6 minutes of cooking. Drain the wings on the rack.
In a large bowl, gently toss the fried wings with the lemon curd-pepper sauce. Transfer the wings to a platter and serve right away.
Author: Monte Mathews
Filed Under: Appetizers, Chicken, Hot and Sticky Chicken Wings, Richard Blais, The Spence Atlanta
Meryl Streep’s favorite Julia Child recipe: Poulet Poele a L’Estragon or Casserole-roasted Chicken with Tarragon
My new Molcajete and Diana Kennedy’s recipe for Guacamole con Tomate Verde (adapted)