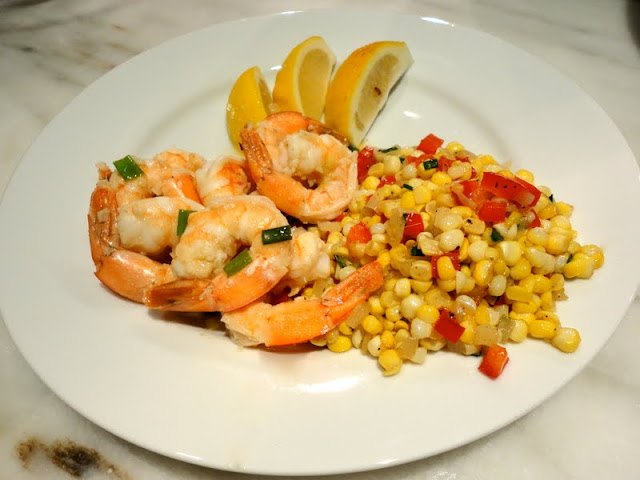 Last weekend, we had close friends staying with us and this dinner really hit the
spot.  It took no time at all to put together. In fact the whole thing took about 30 minutes.  The delicious and mildly coconut-flavored shrimp cooked took about 10 minutes and the only time-consuming thing about the Confetti corn was getting it off the cob. 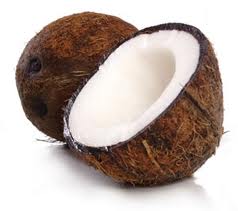 As Andrew said, you either love coconut or loathe it, there isn’t any middle ground.  We are in the coconut lovers club and if our wildly popular post for Coconut Shrimp Salad is an indication, we are far from
alone.  I was drawn to this New York Times recipe by its interesting companion piece about the merits of Coconut
Oil.    The expression that what comes around goes around certainly applies here. I would swear that at some point Coconut Oil was declared verboten and trashed by the food police as being an artery-clogging
super fat.  Turns out I remembered correctly.  Fortunately, Melissa Clark, one of our favorite food writers and author of “In the Kitchen with A Good Appetite” (Hyperion 2010), took it upon herself to find out why all of sudden the stuff was the rage at health food stores and why Whole Foods reported a double digit increase in its sales for every one of the past five years.
What Melissa reported was yet another story of food scientists running amok in
denouncing yet another food stuff in their quest for a fat-free life.  This blog is not about infuriating readers so I’ll leave it to Melissa to tell how this particular folly was created*. I will leave the subject with the following: Turns out Virgin Coconut Oil, which is what Whole Foods
sells and what I used, was never used in the earlier testing.  Instead they used partially hydrogenated coconut oil.  This oil created heart- stopping trans fats.  Virgin Coconut Oil does contain saturated fat which, quoting a scientist Melissa interviewed, “maybe it isn’t so bad for you
after all.”  Jeesh, as we say in Canada.
The virgin coconut oil we used gave the shrimp a delightfully light coconut overtone  which was a perfect foil for the coriander and lemon flavors of the dish.  I can hardly wait until Andrew uses it as a substitute for butter in a coconut pie crust.  Melissa says it’s a standout there too.  The only negative I could find is that it is easily as expensive as good extra virgin olive oil.  Make that very good olive oil.

As to Ina’s corn, here’s a confession:  I much prefer corn off the cob than on.  It is so much nicer to eat and instead of a simple flavored butter, you can add great taste to this dish as Ina did. This recipe is from “Barefoot Contessa Back to Basics” (Clarkson Potter 2008). The red pepper’s contribution is both in color and texture.  The chives add both a subtle onion flavor and color to the dish.  Corn off the cob is also much kinder to your teeth.  I am a slave to the admonishment not to use your teeth as tools.  I think that’s exactly what corn on the cob asks you to do.  Do try this recipe and see if you don’t agree, it’s the way to go with this summer’s wonderful corn.  In case you missed it when we first reported here: you should keep corn in the coldest part of your refrigerator, shuck it at the last minute and to make life easier, cut in horizontally on a cutting board –not vertically which always seems to send the corn flying everywhere you don’t want it to go.  Here are the recipes:

Recipe for Sauteed Shrimp
with Coconut Oil, Ginger and Coriander courtesy of the New York Times 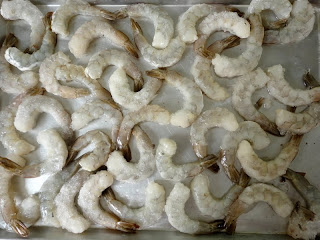 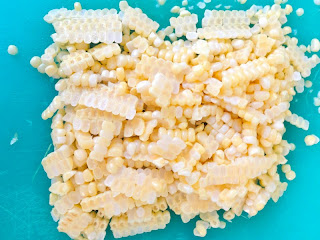 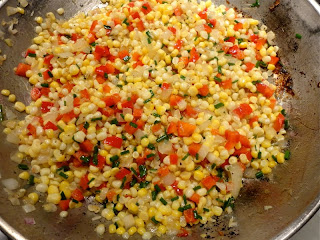 Add the butter to the pan and allow it to melt. Over medium heat, add the corn, salt, and pepper and cook, stirring occasionally, for 5 to 7 minutes, until the corn just loses its starchiness. Season to taste, gently stir in the chive and serve hot.