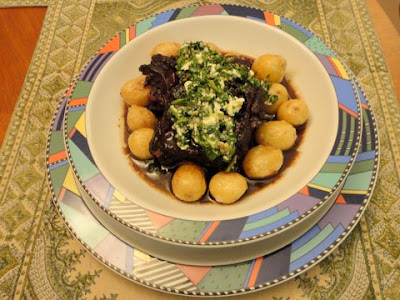 What’s better than a long braise on a cold winter’s day?  Filling the house with wonderful smells for a few hours, it’s the perfect dish to cook on a wintry Saturday or Sunday when you want to stay indoors.  I’m a big fan of Fine Cooking magazine as regular readers know.  So it was not a big surprise when their recent recipe for Suzanne Goin’s Short Ribs proved a delicious tonic to the cold weather over the weekend.  The flavor is incredible. Even non-Feta loving Andrew enjoyed this tangy salsa verde which transformed these ribs into something we’d never tasted before.  But more on the ribs later…I want to launch a protest against the weekend’s other recipe, also from Fine Cooking.
In the same article on One Pot Dinners in the February/ March issue of Fine Cooking, was a recipe for Braised Duck Legs with figs, star anise and winter squash.   Now we love Duck and it’s quite the bargain—actually costing half what the short ribs did.  If cost had anything to do with flavor, that might explain why the duck was such a disappointment.  There was virtually no taste at all.  The vegetables were overcooked to the point of mush, the crisp duck emerged from its lengthy braise with very little to recommend it.  The whole dinner was a huge disappointment.  The recipe was attributed to Koren Grieveson of the restaurant “Avec” in Chicago.  There’s a note that Chef Grieveson is known for “Robust Mediterranean-inspired cooking”.  Nothing in this dish would lead you to believe that.  Bland as baby food, even the salt was off.  Did anyone at Fine Cooking taste this recipe?   Meanwhile, in January’s Food and Wine, I discovered a recipe for Duck confit tacos.  Unfortunately, it was too late to save our Sunday Night Supper.  Now back to the incredible, falling-off-the-bone ribs. 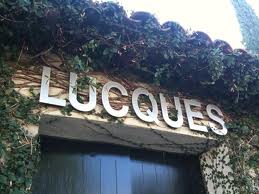 Suzanne Goin is famous for her short ribs.   In her wonderful cookbook, Sunday Suppers at Lucques (2005), the Los Angeles chef has a recipe for short ribs with horseradish cream and pureed potatoes. The story goes that she once tried to take the dish off the menu at her restaurant Lucques.  There were such howls of protest from her customers that she had to re-instate  them immediately.   And for good reason.   These short ribs are excellent and like all her recipes, really teach you as you go along.  As a result of her attention to helping you understand the cooking process, her recipes look dauntingly long.  But I can promise you they really are not complicated.  The ingredient list for today’s recipe only required the purchase of three fresh herbs, a $2.10 piece of French Feta and the short ribs themselves.  We had everything else in the fridge or the pantry.  As I mentioned earlier, Feta is not a staple in our house.  But the only difference I could see between Greek Feta and French Feta was likely in the crumble.  The French cheese is creamier.   I served this a side of spinach and alongside some wonderful little Yukon Gold potatoes labeled Teeny Tiny Potatoes by the people at Trader Joes.  My, they were good.  The recipe is for 6 servings.  I easily cut it down for two but since my short ribs were not the 14-16 ounce size, I used 4 ribs and 1/3 of the rest of the recipe. I did not do the overnight in the fridge.  I rubbed them with thyme and put them in the fridge when I got home and an hour and half later, I proceeded. If you have the time, go with the overnight. I’m sure it would only add to the fantastic flavor.  Here’s the recipe it is:
Recipe for Braised Short Ribs with Salsa Verde and Feta 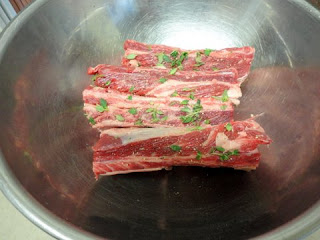 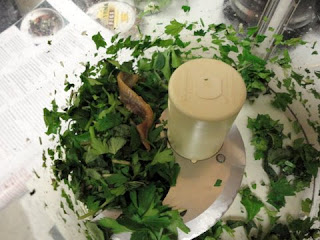 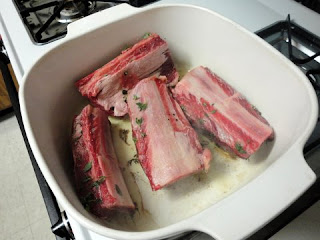 Position a rack in the center of the oven and heat the oven to 325°F.

Heat an 8-quart Dutch oven or other heavy-duty pot over high heat for 3 minutes. Pour in the olive oil, and when it just begins to smoke (after about 1 minute), add as many short ribs as will fit in the pan in a single layer. Sear on the three meaty sides until browned, about 3 minutes per side. Transfer the browned short ribs bone side up to a large bowl. Repeat with the remaining short ribs, reducing

the heat to medium high if necessary. 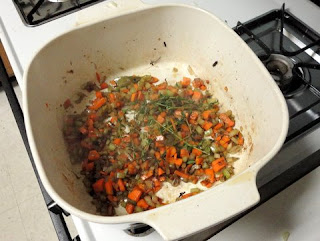 Reduce the heat to medium, add the onion, carrot, celery, bay leaves, and thyme sprigs to the pan and cook, stirring to scrape up the browned bits from the bottom of the pan, until the vegetables begin to brown around the edges, 6 to 8 minutes. Add the port and balsamic vinegar and then the red wine. Increase the heat to high and bring to a boil. Reduce the heat to medium high and simmer until the liquid is reduced by half, about 10 minutes.

Add the beef broth and return to a boil. Return the short ribs and any accumulated juice to the pot, making sure the vegetables are in the broth and not on the short ribs (the short ribs should be nearly submerged). Tuck the parsley sprigs in around the meat, seal the top of the pot with aluminum foil, and cover with the lid. Put the pot in the oven and braise until the meat falls away from the bone when poked with a paring knife, about 3 hours. Remove the short ribs from the oven and set aside for 30 minutes. 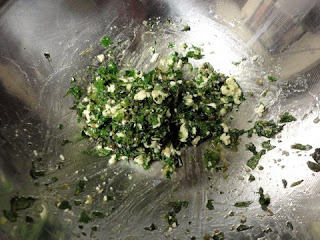 While the short ribs are resting, combine the parsley, mint, and marjoram or oregano in a medium bowl and toss. Transfer about half of the herbs to a food processor, add the garlic, and pulse until very finely chopped, about five 1-second pulses. Add the remaining herbs and the anchovy and pulse about 3 more times to combine. While pulsing, pour about half of the olive oil into the food processor.

Put the capers in a medium bowl and use a fork to mash them. Using a rubber spatula, scrape the sauce from the food processor over the capers. Whisk in the remaining olive oil, 1 tsp. salt, and 1/4 tsp. pepper, and then add the feta. Season to taste with salt and pepper. 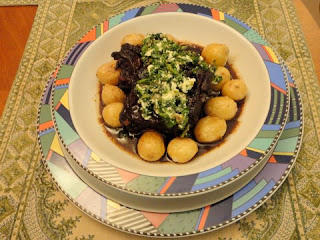 Use tongs to transfer the short ribs from the pot to a large platter. Cover the platter with foil. Strain the braising liquid through a fine sieve into a large bowl, pressing on the vegetables with the back of a ladle to extract as much liquid as possible. Skim the fat off the top and pour the liquid back into the braising pot. Bring to a simmer over medium-high heat and cook until the broth is reduced slightly, 10 to 15 minutes.

Divide the short ribs among 6 bowls. Moisten with some braising liquid, drizzle with the feta salsa verde, and serve.