Gratin of Sweet Potatoes and Leeks and other Thanksgiving delights

It’s Thanksgiving and if ever there was a time to cook, this is it.  I love this holiday. Like many people who weren’t born in this country, I see this day as a true celebration of America.  And in its inclusion of everyone– regardless of what religion they do or do not practice –it is a celebration of us all.  And it doesn’t hurt that the food we serve is some of the most delicious we make all year. And clearly the most bountiful.
Today’s post is truly an example of over-the-top Thanksgiving cooking.   Fair warning…this is one of the richest things (aka fatty) I’ve made in a very long time.  But it was so delicious and really satisfying in tiny portions that I’d make again in a heartbeat…assuming I still had a pulse after consuming the pancetta and cream involved in the dish.

Before we get to this recipe, here are some other previously published Thanksgiving dishes that are well worth a look into. 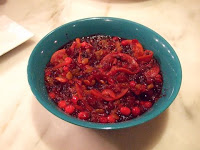 First, there’s the essential cranberry relish.  This is a must have on any table and this one is a winner.  I just got the following message from my friend, Susan; “I made your cranberry citrus relish yesterday.   I was tired of my mother’s recipe but had to sample yours before I served it on Turkey Day.  It was d-double-ious!”  And here’s the link to the story and the recipe:http://chewingthefat.us.com/2009/12/ultimate-cranberry-citrus-relish.html

Then there’s the recipe for Cornbread stuffing..Susan goes on to say: “I’m dying to try the cornbread stuffing too, but my traditional sausage stuffing is a big favorite.  Maybe two this year?”  I think mine is pretty terrific. http://chewingthefat.us.com/2009/12/cornbread-and-sausage-dressing.html 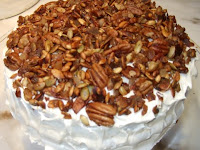 Finally, I highly recommend this incredible pumpkin layer cake:http://chewingthefat.us.com/2010/10/brown-butter-pumpkin-layer-cake.html And to further tell you how much we love this cake, I had to bring in a virtual ‘batterie de cuisine’ so that this cake can be made in Pennsylvania, where we are headed for Thanksgiving this year.

Now to our Gratin of Sweet Potatoes and Leeks.  I adapted this recipe from Fine Cooking (again). I do highly recommend the magazine.  It really explains things extremely well and it illustrates virtually everything it talks about.  This dish was initially published in a story about Easter Ham.  So for those who bought ham at www.MontesHam.com, a shout-out to you all.  Thank you for making our initial selling period such a success. (We sold out!) But this gratin make a welcome addition to any roast you were serving, including a big beautiful roast turkey.
What I changed about the recipe was to increase the number of leeks used and, believe it or not, to lower the amount of cream recommended.  I went full strength on the pancetta.  If you have a mandolin, this is the time to use it.  You can create the most perfect and uniform slices of potato.  My children gave me a mandolin for Christmas a few years ago and it’s amazing how much I use it.  It’s the OXO mandolin and I’d order one right now.  You have to be very careful with the blade and I find the thingamajig that is supposed to protect your hand is difficult to use.  But once you’ve got the hang of it, you won’t believe how simple it is to achieve perfection.  Not to brag, but I think this looks incredibly good.  But please, if you have no mandolin, just thinly slice the potatoes with a regular knife.  Here’s the recipe:
Recipe for Sweet Potato and Leek Gratin 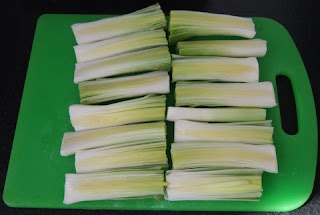 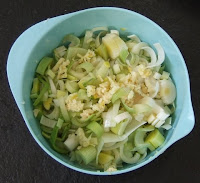 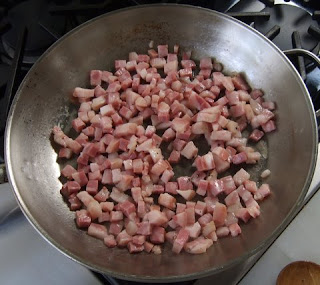 Lift the leeks gently from their soaking water so that any grit stays behind. Drain them in a colander. In a medium saucepan over medium heat, add the pancetta or ham and cook, stirring occasionally, until golden, about 9 min.
Remove with a slotted spoon to drain on paper towels. Add the leeks and garlic to the pan, cover, and reduce the heat to low. Sweat the leeks and garlic, cooking slowly and stirring occasionally, until the leeks are softened, about 5 min. (Don’t let the leeks or garlic brown.)
Add the cream, bring to a boil, reduce the heat, and simmer uncovered for 5 min. Stir in the pancetta or ham, the thyme, and the salt; add pepper to taste. Set aside. 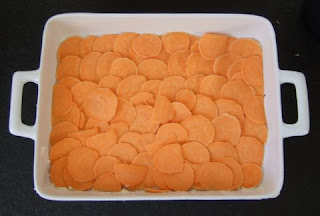 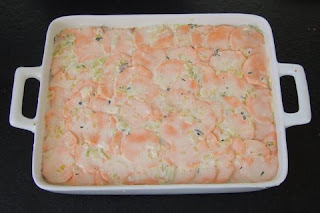 Butter a 12 x 9 in baking dish. Slice the sweet potatoes between 1/4 and 1/8 inch thick. Repeat with the Idaho potatoes. Arrange one overlapping layer of Idaho slices on the bottom of the casserole. Spoon 1/4 of the leek cream evenly over the potatoes. Add a layer of sweet potato slices, and spoon on another ¼ portion of the leek cream. Repeat with the remaining potatoes in alternate layers until all are used. With your hands or a rubber spatula, press down firmly on the potatoes and drizzle the remaining leek cream over them. Bake until the gratin is golden on top, 50 to 60 min. Let rest in a warm place for 15 min. Cut into squares and serve.
I made this a day in advance, covered it with plastic wrap and baked it on day two.  It was excellent.  By the way, Fine Cooking lists the calorie count on a serving of this dish as 540 calories. I won’t go into the fat grams.