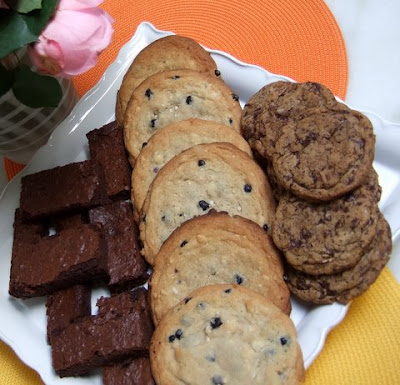 In the picture above, today’s cookie gets short shrift.  It’s overwhelmed in size by the massive 4 inch Blueberry and Cream and it’s well off to the side.  However, in voting for what cookie recipe our readers wanted to see next, Andrew’s masterful version of this delight came up front and center.    And for good reason, America’s long had an affair with variations on this cookie.

Doing a little research on the subject, I read that a woman named Ruth Wakefield invented the cookie in the 1920s.   She and her husband owned an Inn in Massachusetts called the Toll House Inn.  She became well known for  her cooking, especially her desserts.  One day, when she went to make something called a Butter Drop Do cookie, she came up short on the baker’s chocolate the recipe called for.  Instead, she substituted a semi-sweet chocolate bar that she’d cut up into bits.  Unlike the baker’s chocolate, the chopped up chocolate didn’t completely melt, it only softened.
By coincidence, the chocolate bar Ruth used had been given to her by one Andrew Nestle of the Nestle Chocolate Company.  The Toll House Chocolate Chip cookie recipe became popular, selling lots of Nestlé’s semi-sweet chocolate bar in the process.  Andrew and Ruth came to an agreement.  Nestle would print Ruth’s Toll House Cookie recipe on its packaging where it remains to this day, over 80 years later.  Ruth, for her part, received a lifetime supply of Nestlé’s chocolate.
The origin of this Salted Butter Chocolate Chip cookie comes none other than David Leibowitz, author, among other things of “The Sweet Life in Paris”, a book I’ve highly recommended previously.  This is a wonderful read—the story of a Pastry Chef from California who moves to Paris.  It’s about far more than cooking there.  It’s about the French, their foibles and what it’s like to live there.
Interestingly, when the French deign to use the word ‘cookie’ –untranslated from the English—they are referring to the Chocolate Chip Cookie.   No other variation shares this nomenclature.  I suppose eventually you’d yearn for a chocolate chip cookie in Paris.  You’d have a searing memory of how good “Tate’s” are.  I am afraid this would only happen to me after months and months of visits to Laduree sampling the macarons in every possible flavor.  But when I got around to it, I am sure I’d love a nice butter-laden caramel cookie with, preferably, warm bits of chocolate permeating it.  Hell, I’d even have a glass of milk with it!  But I digress.
Unwrapping some butter, David found a recipe for “Cookies aux Noix et chocolat”.  At the risk of repeating myself, translated that is a recipe for “Chocolate Chip Cookies with nuts.”  But what astonished David when he read it was the use of Salted Butter.  As any decent baker can attest, salted butter is unusual in baking.  In this recipe salt is not only in the butter but also later used as a finish on the cookies.  As David points out, you can use unsalted butter and add ¼ to ½ teaspoon of salt to it.  But stay away from kosher salt if possible and steer clear of table salt altogether which will only give your cookie a bitter, acrid taste.  Opt instead for a luxury salt like Fleur de Sel.   If you’ve had any luck at all, someone’s given you one of those Williams-Sonoma gift sets of salt with their various colors and origins.  Use those. What’s funny here is that for all the talk of Chocolate Chips, they’re not used here.  Instead, you chop your own bittersweet or semi-sweet chocolate. Here goes.
Recipe for Salted Butter Chocolate Chip Cookies 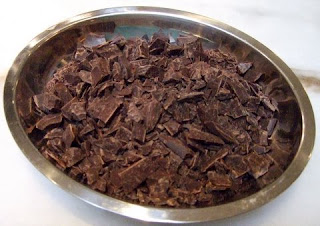 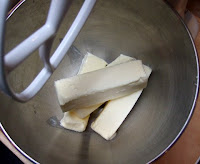 1. In the bowl of a stand mixer, or by hand, beat the butter, brown sugar, and granulated sugar just until smooth and creamy.
2. Beat in the egg and the vanilla. 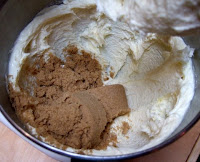 3. In a small bowl, whisk together the flour, baking soda, and salt.
4. Stir the flour mixture into the beaten butter until combined, then mix in the chopped chocolate (including any chocolate dust) and the chopped nuts. 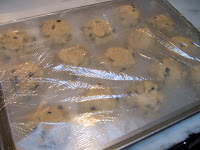 5. Cover and chill the batter until firm. (It’s preferable to let it rest overnight.)
6. To bake the cookies, preheat the oven to 350ºF (180ºC). Line two baking sheets with parchment paper or silicone baking mats.
7. Form the cookie dough into rounds about the size of a large unshelled walnut. Place the mounds evenly spaced apart on the baking sheets, and press down the tops to flatten them so they are no longer domed and the dough is even.
8. Bake the cookies for ten minutes, rotating the baking sheet midway during baking, until the cookies look about set, but are not browned. 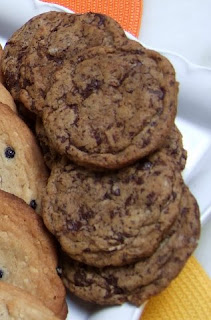 9. Remove from the oven and quickly tap the top of each with a spatula, then return to the oven for two to five more minutes, until the tops of the cookies are light golden brown.
Remove from oven and let cookies cool.
Storage: The cookies can be stored at room temperature for up to five days in an airtight container. The dough can be refrigerated for up to one week or frozen for one or two months.
Author: Monte Mathews
Filed Under: David Lebovitz, Desserts, Ruth Wakefield, Salted Butter Chocolate Chip Cookies
The 10 Best Cookbooks of 2009 and the Top 20 Worst Restaurant Foods in America
Peanut Butter and Banana Cream Pie