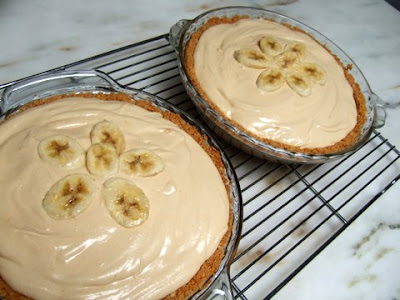 The boys at Baked, Matt Lewis and Renato Poliafito, were inspired to create this dessert by the King himself.   Elvis’s obsession with Peanut Butter is well known.  I first read about it when my friend Yvonne gave me “Are You Hungry Tonight?” by the brilliantly named Brenda Arlene Butler, the all-Elvis cookbook that you could likely put on ten pounds just by reading.   Elvis’s mother is credited with his love for Peanut Butter and Banana sandwiches.  Talk about variations of a theme:  Later in life, Elvis added bacon to the mix thereby creating the first heart-attack-on Wonder-bread sandwich.   The only person I ever knew who could out-peanut butter Elvis was my Mother.

She was complete devotee of peanut butter.  It was the last thing she ate everyday for years.  I’m not sure she could sleep before first consuming a peanut butter sandwich.   A noted tightwad, her love of peanut butter spurred her purchase of the then relatively expensive Cuisinart.  Over the phone from Atlanta, she raved about her homemade peanut butter made possible by this whirling dervish of a machine.   Turns out, Mother was right about peanut butter.  It’s an amazingly healthy food with plenty of fiber and good-for-you fats.    But I can’t claim any real health benefits from this incredibly delicious peanut butter and banana pie.  But my is it good!
Matt and Renato were searching for a banana cream pie that wasn’t overwhelmingly sweet when they hit upon the idea of an Elvis inspired layer of peanut butter.  We first fell in love with this recipe watching a Bobby Flay “Throwdown” with Matt and Renato.  We love banana cream pie so this rich and indulgent treat caught our eye. And if you’re wondering why Andrew made two of them, it’s because this was the finale to a dinner party for 12.   The recipe is for one pie.   There’s quite a bit of chilling and cooling so you might want to start this early in the day.  Alternatively, you can make the peanut butter layer a day early.  And if you’re feeling pluckish during the process, you can always make yourself and peanut butter sandwich.  Here’s the recipe which appeared in Bon Appetit in May 2009. And if you have a minute and 30 seconds, you can watch Matt and Renato put the whole thing together in this clip from the Food Network: https://www.foodnetwork.com/videos/peanut-butter-banana-cream-pie/61283.html 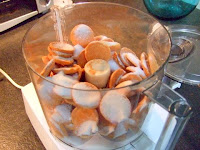 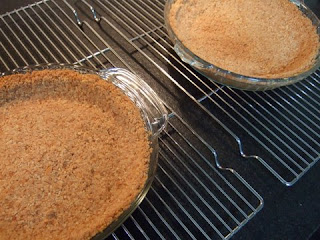 Preheat oven to 350°F. Combine all ingredients in processor; blend until mixture resembles moist crumbs, about 1 minute. Transfer to 9-inch-diameter glass pie dish and press mixture onto bottom and up sides (not rim) of dish. Bake crust until golden brown, about 12 minutes. Remove from oven; press crust with back of spoon if puffed. Cool crust completely.
To make the vanilla pudding filling: 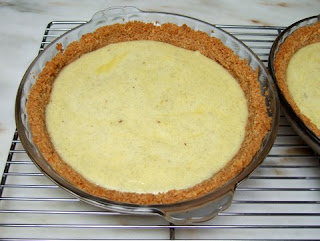 Whisk sugar, cornstarch, and salt in heavy medium saucepan until no lumps remain. Gradually whisk in cream, then milk. Add yolks and scrape in seeds from vanilla bean; whisk to blend. Cook over medium heat, whisking constantly, until pudding thickens and boils, about 5 minutes. Add butter and stir until melted. Spread warm pudding in cooled crust. Chill until filling is cool, about 1 hour. 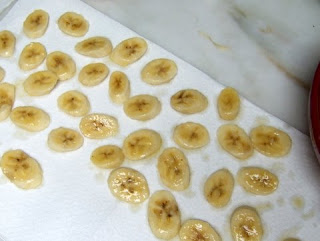 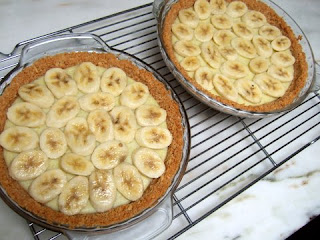 Using electric mixer, beat cream cheese and powdered sugar in medium bowl until smooth. Beat in vanilla, then peanut butter. Beat cream in another medium bowl until firm peaks form. Fold large spoonful of whipped cream into peanut mixture to loosen, then fold in remaining cream in 2 additions. Spread peanut butter layer evenly over bananas. Chill at least 3 hours. DO AHEAD: Can be made 8 hours ahead.Keep chilled. 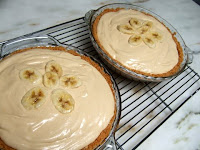