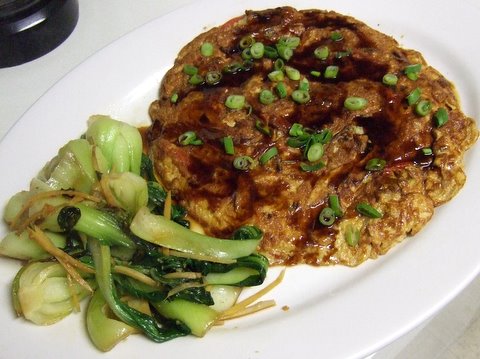 “Fine Cooking” is at it again.  In their current “Make it Tonight” section of ‘just 30 minutes to dinner, start to finish’ recipes, more than one of them caught my eye.  So it became a game of deciding which to make first.  And after I’d read the nutrition information on their take on Egg Foo Yung, I was hooked.  It comes in at 350 calories a serving with 22 grams of protein and, miraculously, just 8 grams of carbohydrates!  Now that’s worth making.

Egg Foo Yung is an American (and British, I’m told) Chinese restaurant invention.  But contrary to popular belief, it does have roots in an elaborate dish from Shanghai called Foo Yung Egg Slices.  In Shanghai, ham is paired with egg whites.  Further north in China, minced chicken breast supplants the ham.  The ‘50s and ‘60s American version of Egg Foo Yung was a deep-fried pancake filled with eggs, vegetables, meat or seafood.
Somehow I missed the whole thing.  Even though we had Chinese restaurants where I grew up, we never went near them.  It wasn’t until I came to New York after college that I started to love Chinese food and especially the kind that was delivered to your door.  By the time that happened, Chinese in New York meant Sichuan and Hunan cuisine.  The old Cantonese Chinese food, like Egg Foo Yung, was declared passé and relegated to memory.  All in all, I couldn’t wait to make the recipe Tony Rosenfeld developed for “Fine Cooking”.
Since Tony is the Author of “150 Things to Make with Roast Chicken and 50 Ways to Roast It”, it’s no surprise that his Egg Foo Yung features strips of boneless, skinless chicken breast.  While not roasted, the guy knows his way around a chicken.  The preparation here isn’t complicated.  You make the three liquid mixtures first and then go from there.  I will admit, the cooking time is fast but I couldn’t bring this under 30 minutes.  I’d say it took a good 45.  There is considerable chopping and slicing. Here’s the recipe:
Recipe for Egg Foo Yung courtesy of “Fine Cooking” and Tony Rosenfeld 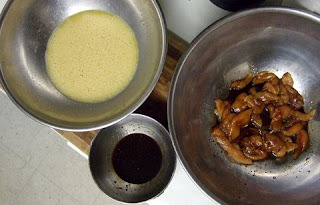 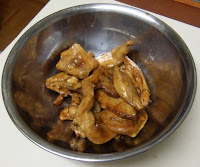 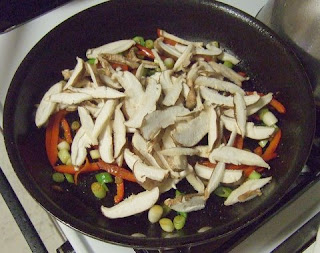 Heat 1 Tbs. of the canola oil in a large (12-inch) nonstick skillet over medium-high heat. Add the chicken and cook, stirring, until it loses its raw color, 2 to 3 minutes; transfer to a plate. Add 1 Tbs. of canola oil, the bell pepper and scallion whites and cook, stirring, until the vegetables begin to brown, about 2 minutes. Add the shiitake, sprinkle with 1/2 tsp. salt, and cook until softened, about 2 minutes. Add the vegetables and chicken to the egg mixture and stir gently to combine.
Wipe out the skillet with paper towels. Heat the remaining 2 Tbs. oil over medium-high heat until shimmering hot. Add the egg mixture, reduce the heat to medium, and cook, running a spatula in short, circular motions along the bottom of the pan, until the eggs begin to set, 2 to 3 minutes. Reduce the heat to low and gently press on the eggs with the spatula to flatten them. Cook until the eggs are just firm to the touch, about 2 minutes. Set a large plate over the pan and flip the eggs onto the plate so the bottom faces up. Drizzle with the oyster sauce mixture, sprinkle with the scallion greens, and serve.  Serve with stir-fried baby bok choy seasoned with ginger and garlic.
(Find the recipe in our label archives on the left hand side of this page.)