Chicken Paella with Sugar Snap Peas in about an hour! 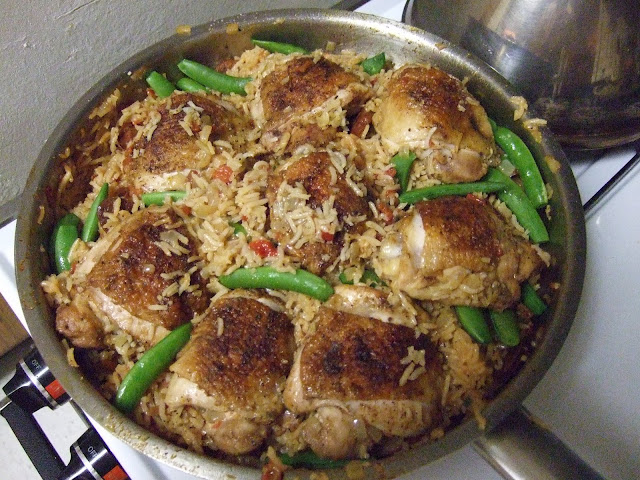 There’s no one dish supper quite on the level of a great paella.  It combines protein–sometimes several of them–with carbohydrates and then, for good measure, adds some vegetables. The one big drawback to paella is the interminable time a good one takes to make.  So this recipe from Bon Appetit caught my eye when the magazine put it in a feature called ‘Fresh and Easy Dinners’. It actually toppped their list, and was pictured on their cover.  If you’re ever had a paella in Spain, you know it is hardly ‘quick’ and involves a special paella pan. But this one uses any heavy skillet you have on hand and gets dinner on the table in about an hour.  Considering my memories of paella, that’s simply astonishing.

I distinctly remember being in Spain with my elderly parents when we ordered Paella for lunch in the Andulusian countryside.   The paella took an interminable amount of time to get to the table.  In the meantime, almonds and a enormous quantity of Sherry were served first and this proved to be a mistake.   A good hour passed of drinking the sherry and nibbling on the almonds.  Despite its gentile reputation, Sherry is high in alcohol at about 20{4e4771bbe073b579fdd8e596ee487f65145483febbc8ba0a80525f62b26cad86}.  Compare that to a glass of Chardonnay at 13{4e4771bbe073b579fdd8e596ee487f65145483febbc8ba0a80525f62b26cad86}.    By the time the paella appeared, both my parents had literally nodded off at the table.  I remember having to apologize profusely as I tucked into the paella solo.

Fortunately, this recipe lets you use any large skillet and, while I missed the crunchy rice that the traditional paella pan assures, the flavors are outstanding. It makes a wonderful mid-week casserole.  And, true to Bon Appetit’s word, it is certainly is a lot quicker to the table than my Andulusian version was.  You might have time for only a glass or two of sherry and it will be ready to serve.   The addition of the Sugar Snap peas adds both crunch and a wonderful green accent to the dish.  And Sugar Snaps say Spring to me.  Here’s the recipe:
Recipe for Chicken Paella with Sugar Snap Peas
Serves 6. Takes about 1 hour to make. 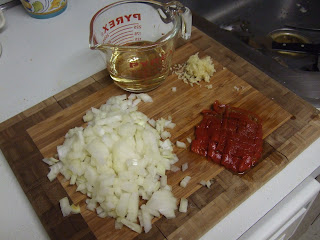 8 thoughts on “Chicken Paella with Sugar Snap Peas in about an hour!”