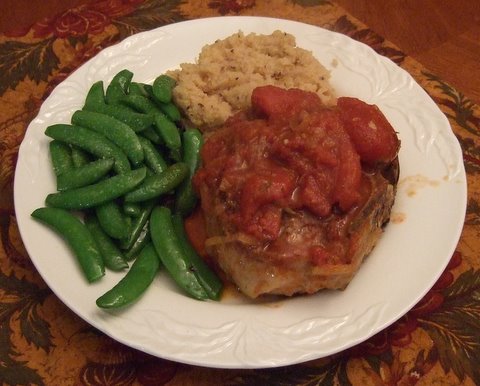 I love a good braise almost as much as I love a good Pork Chop.  And in a November ‘09 column in the New York Times, Melissa Clark

put the two together to create this dish.  If you follow Melissa at all, you know she gets an idea about what she is going to cook, checks out her pantry and her freezer and, if that fails to yield something she wants, she’s off to the supermarket.  In this case, she wanted a cold-weather meal, a satisfying long-cooked dish that’s soaked up flavor for hours.  Or, at least, something that tastes that way.  So she hit upon big, thick bone-In Pork Loin Chops.   Because they cook in no time, her braise had to be as big as the chops.  What she put together were ingredients that seem to marry with pork—garlic and rosemary—and, because the meat would not braise for hours and hours, she goosed up the sauce with tomatoes and, hold your breath, anchovies to give it a salty, hearty taste. 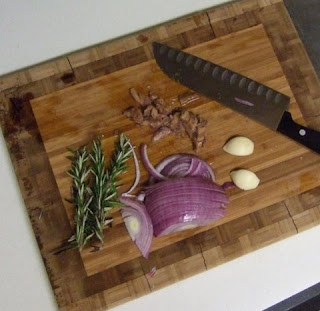 Anchovies seem to be popping up in more and more recipes that I’ve been wanting to try and this seem like an ideal opportunity. Now, before you go off about how you hate anchovies, you should know that these melt into the sauce.  They flavor it with a pungent, salty taste but you’d be very hard-pressed to identify what the origins of that taste are.  But you will discover, it has absolutely nothing in common with those nasty, hairy little things you find on the top of bad Caesar salads.

This is a very good weeknight recipe because it takes just over a half hour.   I served it with some Snap Peas which, as you can see, looked very pretty on the plate.  I also served it with a Polenta flecked with black truffles.  Frankly, polenta and Andrew and I are not great together.  Although it was not hard to make, it really didn’t deliver much more than a kind of truffled mush on the plate.  I’d have infinitely preferred the rice or noodles Ms. Clark suggested in her recipe which, with a couple of minor changes, follows. 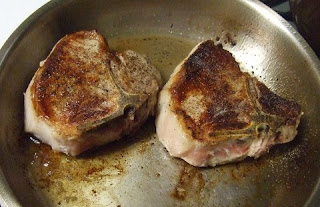 1. Preheat oven to 350 degrees. Rinse pork chops and pat dry with a paper towel. Season generously with salt and pepper. In a large, ovenproof skillet over medium-high heat, place 1 tablespoon oil. Sear chops until well browned, at least 3 to 4 minutes a side. Transfer to a plate.

2. Add remaining tablespoon oil to skillet and sauté onion and rosemary until onions are golden, about 5 minutes. Add garlic and cook for another minute.

3. Add tomatoes, anchovies and remaining salt and pepper and cook, stirring occasionally, until tomatoes begin to break down, about 8 minutes. 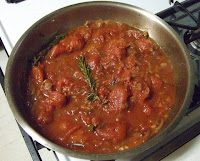 4. Add pork chops to skillet, spooning sauce over chops. Cover skillet and transfer to oven to bake until a thermometer inserted into center of meat reads 145 degrees, about 15 minutes. Allow chops to rest for 5 minutes in pan. If desired, serve with polenta, noodles or rice to soak up sauce.

Serves 2.  This recipe could easily be doubled but I would not double up on the tomatoes but perhaps substitute a 35 ounce can of plum tomatoes.  You will have tomato sauce to spare.
Author: Monte Mathews
Filed Under: Anchovies, Comfort Food, New York Times, Pork, Weeknight Dinners
Review of Bill’s Bar and Burger and a recipe for Chicken Parmigiano Burgers
Braised Chicken Thighs with “Pizza Spices”