Forget Everything You Know About Cooking A Great Steak 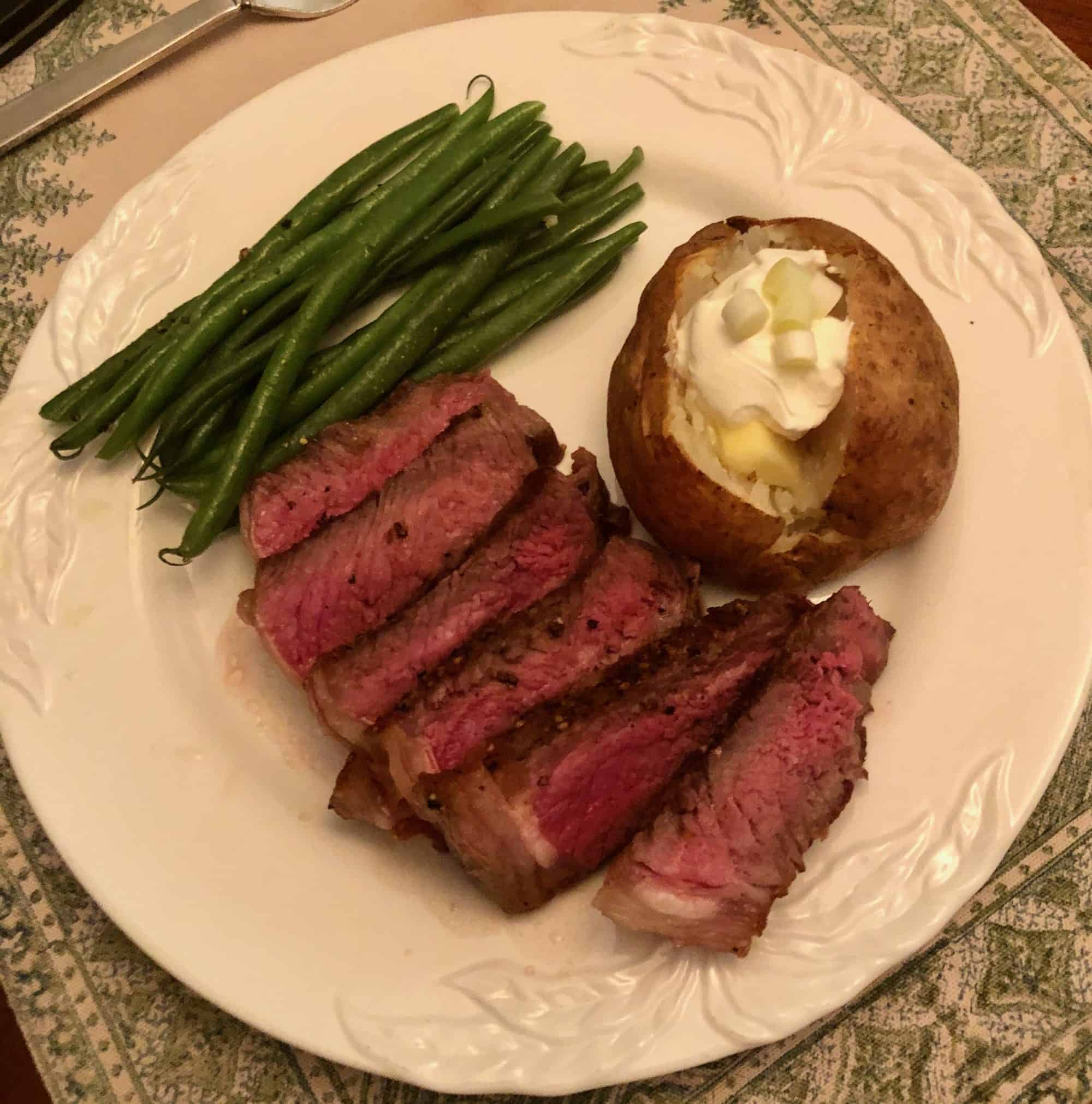 This cooking method is totally unorthodox. But the results were the best steak we’ve had in ages.

We love a great steak. One that has a deeply browned crust on the outside and a true rosy medium-rare inside.  We like New York Strip best for its marbling and great beefy flavor.  That is precisely what we got following a recipe by Andrew Janjigian in Cook’s Illustrated’s latest issue. I had to wait until after Easter to post it. But if you are a carnivore, absent your outdoor grill, I think you’ll want to cook it this way from now on. And we didn’t even have turn on the exhaust fan.

Desperation is the mother of this invention.

Like everyone else in New York, we’re confined to our apartment and have been for days on end.  The one thing I do not cook here is steak. Every attempt set off the smoke alarms so ferociously, we’ve had neighbors knock on the door asking if we are okay.  So I gave up. Just about a year ago, Andrew and I moved down a floor in the same building where we’ve lived for over 25 years. We love our building—its location and the service we get here. In truth, our previous apartment dated from the 60s. And I mean dated. So we were delighted to move into a place that had been top-to-bottom renovated just a couple of years ago. It must have been in the years when ‘loft-like’ was a selling point. Because it has a wide-open living room and dining room and an open kitchen. And we love it. We just couldn’t cook steak in it.

Forget everything you thought you knew about stove-top steak cooking. I can’t pretend to go into the science behind this recipe. I am not Alton Brown. I can tell you what Andrew Janjigian discovered. 1. Cook in a non-stick pan—not a cast-iron skillet or a stainless steel pan. The non-stick surface prevents the steaks from sticking without oil. 2. Don’t add any oil. That oil is what smokes and splatters at high temperatures. The two cuts we mentioned, New York Strip and Rib Eye are well-marbled and don’t need extra fat to brown them. They’ll release plenty of their own while cooking. 3. Do not pre-heat the skillet. What starting the steak ‘cold’ allows the interior to heat up gradually and evenly. 4. Start with high heat to drive off the moisture then lower it so that the interior and exterior finish cooking at the same time. 5. Flip the steak every 2 minutes. It will cook from the bottom up and the top down so the interior will be even all the way through and the crust will gradually build up. your best stove-top steak ever.

Here is the recipe. Follow it and you will end up with a steak that looks and tastes just like ours. This recipe also works with boneless rib-eye steaks as long as they are at least 1 ½ inches thick.  I found that a 16 oz. New York Strip is a gracious plenty for two people. And you can see what one portion looks like when sliced. If you can, salt the steaks at least 45 minutes and up to 24 hours before you cook them. Sprinkle 1 teaspoon of kosher salt over both sides. Refrigerate the steak and pat them dry with a paper towel before cooking. Finally, if you want to cook the perfect baked potato to serve with your perfectly cooked steak, follow the link below.

The perfect technique for pan-searing Strip Steaks without setting off the Smoke Alarm.