I got into a peck of trouble for pronouncing Pasta a cold-weather food.  And I have to admit, ‘they’ were right and I was wrong.  Pasta is one of the most adaptable of all foods.  Just think what you can marry it with! Fish, shellfish, beef, veal, pork, cured meats like prosciutto, tomato sauces, cream sauces, vegetables of every description.  And pasta itself, numbering over 50 recognizably different shapes is endlessly variable.  Oh, and another thing: who doesn’t love a great bowl of pasta?  So when I saw a magnificent bowl of spaghetti topped with a sea of green vegetables, I had to make it. Especially when it has Carbonara attached to its name.  This almost instant sauce is a reminder of so many meals in so many trattorias in Rome where it was invented. 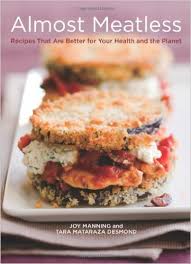 Here it is from a book with the following title; “Almost Meatless: Recipes That Are Better for Your Health and the Planet” by Joy Manning and Tara Mataraza Desmond (Ten Speed Press 2009).  Nothing like setting out to save the planet with a cook book!  But saving the world aside, this combination of fresh spring vegetables, crispy pieces of bacon (the almost part) and the silky, cheese-y carbonara sauce is a complete winner.  And it takes all of about 20 minutes to make including the chopping.

Most of what is known about Carbonara itself is murky.   It’s part of a group of Italian dishes that combine bacon, cheese and pepper. Cacio e Pepe comes to mind.  Its uncertain history has led to plenty of theories of how it got its name which is derived from the Italian word ‘carbonaro’ which means ‘charcoal burner’.   That gave rise to the belief that the dish was made for Italian charcoal workers.   And that may also explain why in parts of the United States, Carbonara is sometimes called “Coal Miner’s Spaghetti”. Oddly, it appeared in Italian cooking authority, Elizabeth David’s “Italian Food” which was published in Britain in 1954.  However it did not appear in “La Cucina Romana”, the seminal guide to Roman cooking published by Ada Boni in 1930.  And in 1950, La Stampa, the Italian newspaper, described the dish as one sought out by American troops after the liberation of Rome in 1944.  That was about the time Italians were eating eggs and bacon supplied by the American troops.
When you cook this, make sure your eggs are at room temperature and that you have all the ingredients cut up and ready to go.   Do this before the pasta even hits the water.   Make sure you heat the pasta bowl using hot water so that the hot pasta stays hot while the sauce literally makes itself.
Recipe for Summertime Spaghetti Carbonara adapted from Joy Manning and Tara Mataraza Desmond
Serves 2 generously.  Can be doubled. Takes 20 minutes to make. 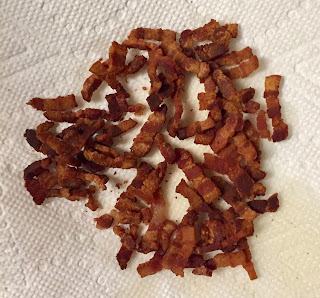 2. Heat a sauté pan over medium heat and add the bacon, cooking for about 5 minutes, until crispy. Transfer the cooked bacon with a slotted spoon to a paper towel and set aside. Return the pan with the rendered fat to the stove top for future use. 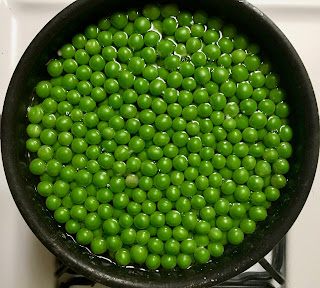 3. Bring a pot of salted water large enough to hold the spaghetti to a boil. Drop the peas into the water and cook them for 5 minutes. Transfer them to a strainer with a slotted spoon or a spider basket. Add the pasta to the boiling water and cook for 10 minutes, or until al dente. 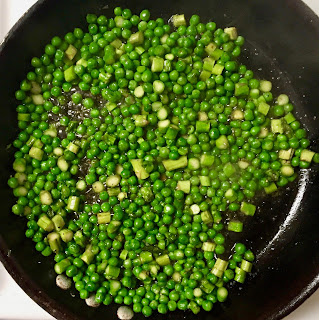 4. While the pasta cooks, heat the bacon fat in the sauté pan over medium heat. Add the peas and asparagus, and sauté for about 5 minutes. Remove from the heat, and set aside.

Whisk together the eggs and cream. Have the egg mixture, vegetables and bacon ready to toss with very hot pasta.
Quickly drain the pasta and transfer immediately to a large heated serving bowl. Pour the eggs and cheese on top of the pasta, and toss vigorously to coat the strands and gently cook the eggs, forming a creamy sauce. Add the vegetables and bacon, and continue tossing to incorporate them. Season with salt and pepper to taste. 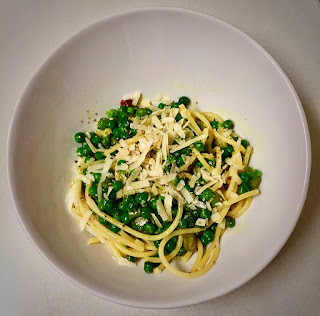 5. Portion the spaghetti on plates and ladle any sauce left in the bowl over each serving. Grate additional cheese on top if you like.