My passion for mushrooms only grows stronger in the fall. And I am always on the lookout for new ways to prepare my favorite fungus.  I was very excited to see a recipe that paired mushrooms I’d never even imagined combining with mushrooms—Cinnamon and Lemon.  Those two ingredients give an intense flavor to the mushrooms.  Even more unusual, the technique for cooking them adds an actual ‘crunchy’ texture to the dish unlike anything I’ve ever had before.   It was a huge hit with my guests when I served it as a side dish.  Considering its creators, I shouldn’t have been so surprised. 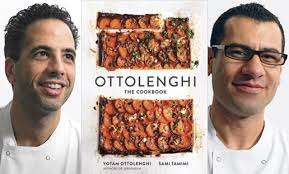 The recipe comes from Yotam Ottolenghi’s first cookbook the eponymous “Ottolenghi: The Cookbook” (Ebury Press 2008).  The book was written with his partner Sami Tamimi.  In the history of food bringing people together, their story may be among the most unique.   They met in London in 1999.  They were both born in Jerusalem in 1968, Sami on the Arab East Side and Yotam, who is of Italian ancestry on the Jewish West Side.  In London, they discovered their similarities were far greater than their differences.  Both are gay men and both chose to leave Israel for personal freedoms unheard of there. In 2002 the men opened Ottolenghi, a food shop, patisserie, deli, restaurant and bakery.  They have never looked back. And this recipe gives you a very good idea why they are now the proprietors of no less than 5 restaurants in London’s trendiest neighborhoods.

I am a huge fan of mushrooms of all kinds, especially those from The East End Mushroom Company www.theeastendmushroomcompany.com. It’s run by Jane Maguire and John Quigley out of a ‘farm’ in Cutchogue on the North Fork of Long Island.  The farm is open for retail purchases just Fridays and Saturdays from 11:00 to 5:00.  So every chance I get, I get there and buy mushrooms grown there and those “imported” from Kennett Square, the “Mushroom Capital of the World” in Pennsylvania.  Their quality and freshness is superb and the variety of mushrooms they sell is the largest on the entire East End of Long Island. 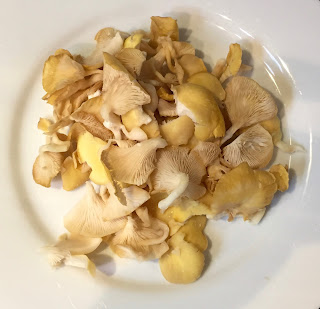 This recipe originally called for five different kinds of mushrooms.  But Ottolenghi himself gave full permission to adding or subtracting varieties and experimenting with other mushrooms. I used East End’s Shiitakes and Oysters.  I supplemented these with some plain white button mushrooms.  The main idea here is to have the quantity needed to do the dish justice and to end up with enough mushrooms to serve the 6 to 8 people the recipe is made for.  Ottolenghi’s quantities are in grams but I’ve translated these into ounces for you.   You need to have a total of  3 5/8 oz of mushrooms. Be sure to sort through the mushrooms, paring away dirt using a brush to clean them.  Do not under any circumstances use water to clean them as they will absorb it and become mushy.  Slice or quarter the mushrooms  then proceed.  Here is the recipe:

Recipe for Ottolenghi’s Mixed Mushrooms with Cinnamon and Lemon
Serves 6 to 8.  Takes all of 15 minutes to make. 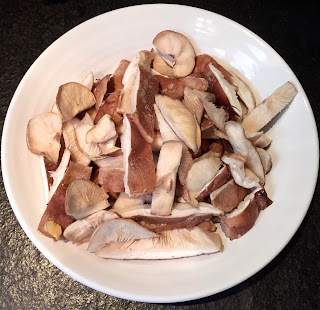 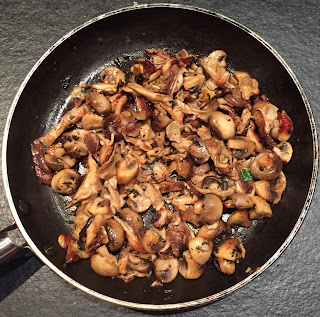 1. Put a large non-stick frying pan over medium-heat and add the olive oil to it so that it can heat slightly. Then sprinkle the thyme, the garlic, the parsley and cinnamon stalks. Add the button mushrooms and let them cook for about 5 mins without disturbing them.

Then give the pan a good shake and add the oyster mushrooms, season with salt and pepper. Stir it a bit and then let it cook for about 3 minutes. Add the enoki mushrooms and then turn the heat off.
Add the lemon juice, give it a good shake. Serve still warm with slices of brown bread.
Author: Monte Mathews
Filed Under: Appetizers, Mixed Mushrooms with Cinnamon and Lemon, Mushrooms, Oyster Mushrooms, Sami Tamimi, Shiitake Mushrooms, Yotam Ottolenghi
Justin Chapple’s Red Potato and Apple Galette
Pasta with Mushroom Bolognese Sauce

2 thoughts on “Ottolenghi’s Mixed Mushrooms with Cinnamon and Lemon”