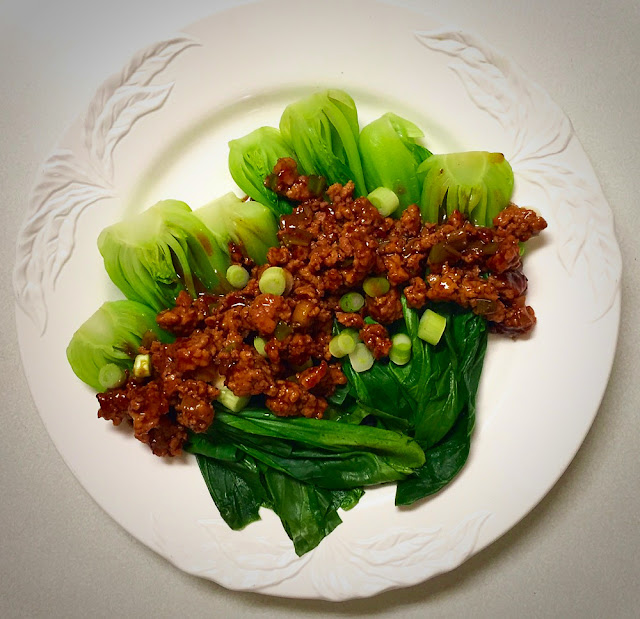 I’ve bought the Bok Choy Trader Joe’s sells quite a few times.  I like the crisp crunch and slightly bitter flavor of the vegetable.  But I have to admit, my Bok Choy hasn’t risen to any great culinary heights.  Recently, as I read through Food and Wine, I came across a recipe that featured an Asian-inspired recipe that looked promising.  And it was!  A raft of Asian flavors made the pork ‘sauce’ a worthy topping for the Bok Choy.  Sweet and spicy, it’s the easiest of dishes to make taking all of 3 steps and 30 minutes from stovetop to table.  It’s from Food and Wine’s Justin Chapple, a young man whose inventiveness can be seen on many of the magazine’s videos.   My discovery of the recipe coincided with the arrival of ground pork to the meat case at Trader Joe’s. Instead of trekking a few blocks more every time I need that particular ingredient, Trader Joe’s became one-stop shopping for this meal. The original recipe was part of a series called “How not to eat a lot of meat”.  However, I had no clue what I would do with the leftover ½ lb of pork so I chose to double the recipe, most of which topped the Bok Choy.  The rest I refrigerated and later used in some Asian-inflected tacos.  But what exactly is Mapo-Style?

Mapo is a Sichuan Chinese dish in origin but it most often contains Tofu to which minced pork is added.  In today’s recipe, the tofu is left out but several of the key Sichuan ingredients are there: The Sichuan peppercorns, the scallions and fermented chili bean paste which is easy to find in the Asian section of the supermarket. In China this is an incredibly spicy dish.  In Chinese restaurants in the west, it is toned down considerably for western tastes and most often, you will find the Tofu or meatless version of the dish to appeal to vegetarians. Today’s recipe contains just enough spice to make it interesting but certainly not enough to cause anyone to break into a sweat.
And what does MaPo mean?   Po is the first syllable of the Chinese word Pópo, which means old woman or grandma.  Ma stands for the Chinese word Mázi which means pockmarks.  So MaPo is an old woman with a pockmarked face.  Occasionally, you’ll see the dish translated as Pock-Marked Grandma’s Beancurd which to me has about as little appetite appeal as I can imagine.  Apparently there was a real Pockmarked Grandma.  The librarian at Harvard’s Yenching Library, a man named Eugene Wu, attests to that.  Wu grew up in Chengdu China and reported that as a young boy he ate Mapo at a Chen’s restaurant run by the original Pock-Marked Grandma herself.   This quick and easy dinner will have you toasting her yourself.  Here is the recipe:
Recipe for Steamed Bok Choy with Mapo-Style Pork from Justin Chapple in Food and Wine Magazine.
Takes 30 minutes to make. Serves 4.  This is the original “Cut Down on Meat” recipe. I doubled it, reserving any leftovers for later use. 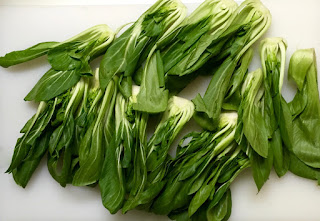 2 1/2 teaspoons cornstarch
1 tablespoon canola oil
1/2 pound ground pork
1/2 teaspoon ground Sichuan peppercorns
Kosher salt
1 tablespoon Asian chile-bean sauce
1 tablespoon hoisin sauce
1 tablespoon soy sauce
1/4 cup thinly sliced scallions, plus more for garnish
Four 6- to 8-ounce heads of baby bok choy, halved lengthwise
1. In a small bowl, whisk the cornstarch with 1 1/4 cups of water. In a large skillet, heat  the oil. Add the pork, peppercorns and a generous pinch of salt and cook over high heat, stirring and breaking up the meat, until crumbly and lightly browned, about 3 minutes. Stir in the chile-bean, hoisin and soy sauces and cook, stirring, until fragrant, about 2 minutes. Stir in the cornstarch slurry and simmer until thickened, about 2 minutes. Stir in the 1/4 cup of sliced scallions and season with salt. Keep warm over very low heat.
2. Meanwhile, set a steamer basket in a large saucepan. Add 1 inch of water and bring to a boil. Add the bok choy to the basket, cover and steam until crisp-tender, 4 to 6 minutes. Transfer to plates or a platter. 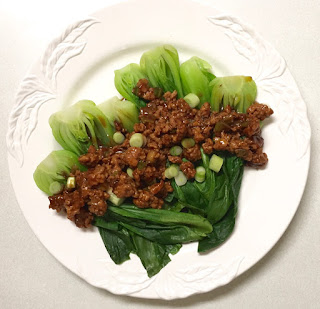