Ruth Reichl’s "Favorite" Recipe from "My Kitchen Year: 136 Recipes that Saved My Life" 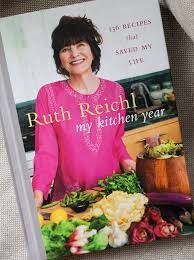 A short time ago, we went to the Jewish Community Center of Manhattan (344 Amsterdam Ave, NY NY 10023 Tel: (646) 505-4444). Judging from the smell of freshly-baked chocolate chip cookies, the place has a robust culinary arts program in addition to all its other offerings in Health and Wellness, Arts and Ideas and myriad others. We were there to hear Ruth Reichl talk about her latest book.  We are no strangers to this particular tome as it was the subject of earlier posts and recipes.  See https://www.chewingthefat.us.com/2016/01/review-of-ruth-reichls-my-kitchen-year.htmland https://www.chewingthefat.us.com/2016/01/ruth-reichls-beef-wine-and-onion-stew.html.  Ms. Reichl simply brought to life much of the misery she suffered when Gourmet abruptly closed its doors leaving Ms Reichl, its editor literally out in the cold.  To our friends, Jill and Steve who went with us, much of this was news.  To me, it was just a sad reminder of what happened when we were robbed of both Gourmet and Ruth.   So when the question and answer session began, I asked the ultimate stupid question: What is your favorite recipe in the book? 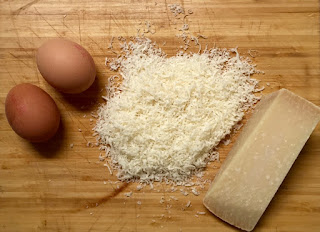 The question is on a par with which is your favorite child, as Ms. Reichl pointed out to me.   But I pressed on altering my question to ask ‘which recipe gets used the most’.   Fortunately, Ms. Reichl had a ready answer for this one:  Page 140. Spaghetti alla Carbonara. The moderator of Ruth’s talk chimed in to say she herself had made it the previous evening.   Since the first thing I ate in Rome after a 40 plus year absence was Spaghetti alla Carbonara, I was intrigued.  And when I discovered that this recipe takes all of 10 minutes to cook I was also delighted.  Carbonara is as Roman as it comes.  And its creamy, cheese-y bacon-y sauce is about as delicious a take on Spaghetti as I can imagine.  Hot Pasta is taken immediately from the pasta pot and combined,  Grated Parmigiano is add to the egg  The first time I made it, I confess to being concerned that the Pancetta I used would be fully cooked before the pasta was, so I took a little longer the first time. The second time I stood at the stove murmuring ‘hurry’ to the pasta pot. So the recipe I am sharing is with Ruth’s original instructions on timing. 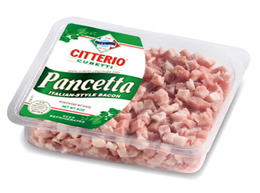 We know Spaghetti alla Carbonara is Roman. But at that point, its origins get a little hazy.  The word “Carbonaro” means “Charcoal Burner” in Italian.   So there are those who believe it was first made for Italian charcoal workers.  The recipe is of fairly recent origin. It is found in Elizabeth David’s “Italian Food” an early English language ‘bible’ of Italian cuisine published in 1954.  When and where it didn’t appear (In “La Cucina Romana” published in 1930 by Ada Bono) gives rise to my favorite story of Carbonara’s invention.  After the Second World War, Italy’s La Stampa newspaper described the dish as being a favorite of American military officers from the allied liberation of Rome.  It was first described as a Roman dish when many Italians were eating eggs and bacon supplied by troops from the USA. Ruth only added the garlic because she likes the fragrance. Ruth’s recipe relied on ordinary bacon.  I like to use slab bacon when bacon is requested.  But I also have used a package of cubed pancetta like the one shown here.  You can also use guanciale, if you can find it. Here is the recipe.
Ruth Reichl’s Recipe for Spaghetti alla Carbonara
Serves 3. Takes all of 10 minutes to make. 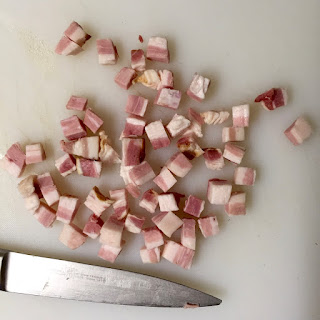 1 pound spaghetti
1/4 to 1/2 pound thickly sliced good quality bacon or pancetta or guanciale.
2 cloves garlic, peeled
2 large eggs
Black pepper
1/2 cup grated Parmigiano cheese, plus extra for the table
1. Bring a large pot of salted water to boil. When it is boiling, throw the spaghetti in. Most dried spaghetti takes 9 to 10 minutes to cook, and you can make the sauce in that time. 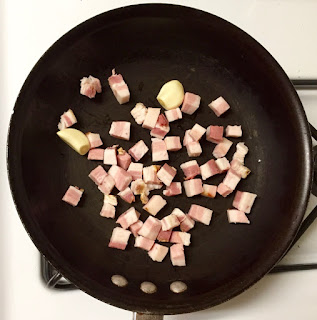 2. Cut the bacon or guanciale crosswise into pieces about 1/2 inch wide.  (Or use the diced Pancetta I found in the supermarket.) Put it in a skillet and cook for 2 minutes, until fat begins to render. Add the whole cloves of garlic and cook another 5 minutes, until the edges of the bacon just begin to get crisp. Do not overcook; if they get too crisp they won’t meld with the pasta. Meanwhile, break the eggs into the bowl you will serve the pasta in, and beat them with a fork. Add some grindings of pepper. 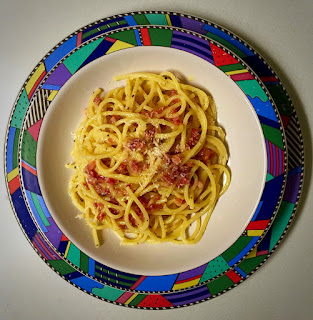 3. Remove the garlic from the bacon pan. If it looks like too much to you, discard some, but you’re going to toss the bacon with most of its fat into the pasta. When it is cooked, drain the pasta and immediately throw it into the beaten eggs. Mix thoroughly. The heat of the spaghetti will cook the eggs and turn them into a sauce. Add the bacon with its fat, toss again, add cheese and serve.
Author: Monte Mathews
Filed Under: Pasta, Ruth Reichl, Ruth Reichl at the Jewish Community Center, Ruth Reichl's "My Kitchen Year", Ruth Reichl's Spaghetti alla Carbonara, Ten Minute Meals, Weeknight Dinners
Braised Chicken with Asparagus, Peas and Melted Leeks
Quick Chicken Kiev from Grace Parisi