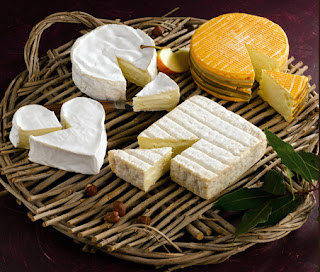 For all the time we have spent in France, inexplicably we have never been to the northwest corner of the country and their provinces of Brittany and Normandy. While we didn’t get to Brittany, Cherbourg, was our first port of call in France   This is the heart of French dairy country. It is the home of ( from left to right:) Neufchatel, Camembert, Pont-L’Évêque and Liverot, all cow’s milk cheeses and all are considered among the world’s best.  Unfortunately, and very unlike Viking, our “Taste of Normandy” tour didn’t include so much as a morceau of cheese.  (Instead we had a Crepe and a glass of Cider, both specialités and both somewhat underwhelming.)


I wish I had known cheese wasn’t on our schedule as our afternoon tour left Andrew and I plenty of time to wander about this small city of 40,000 people. And if there was one thing we passed on our walk, it was literally dozens of bakeries and cheese shops.  Cherbourg’s seafaring past and present consume the town.  And why not?  This was a stop on the Titanic’s fateful voyage.  It was also the first place liberated by the Allies in the Battle of Normandy in 1944.  The port was a shambles but the town escaped relatively unscathed. I would not call it a particularly pretty town, although several buildings were of real interest.

But the highlight of the town for me was a shop that sells nothing but umbrellas made on the premises. And why was this of such interest?  Surely you remember the 1963 film “Les Parapluies de Cherbourg”.  That’s okay. Neither does Andrew.  But I confess to being a huge sentimentalist and a very young Catherine Deneuve enchanted me in this Canne’s Festival Golden Award winner. Apparently, it equally charmed a young boy from Cherbourg.  Jean-Pierre Yvon came from a long line of tanners in the town.  At age 12, Jean-Pierre watched the shooting of the movie with great interest.  First he became a photographer in Paris.  While he was quite successful, about ten years later, he decided to return to Cherbourg and open a high-end store called Ecaille which soon cornered the market on luxury gifts and fashion accessories.
Then, in 1988, under the name Le Veritable Cherbourg, Yvan threw himself into a new venture.  Its the sole purpose is manufacturing and selling a true ‘Umbrella of Cherbourg’.  He had an immediate success on his hands, which allowed Jean-Pierre to open a complete Umbrella factory right on the harbor in Cherbourg.  Go there and with any luck, M. Yvon or his son will be happy to show you around this truly fascinating operation.   Le Veritable Cherbourg now makes umbrellas for every high-end retailer in France. When the doorman shelters you at Cartier or Louis Vuitton or Chanel, he is carrying an “Umbrella of Cherbourg”.  Now, I am pleased to say, I have my own. 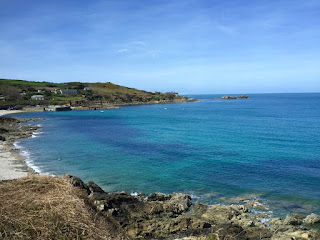 If the beauty of Normandy is not to be found in town, the countryside will more than make up for it.   After lunch by the yacht basin, we joined a Viking tour which took in miles of sandy beaches and glorious green pasture lands as we drove out to Cap de la Hague, where rugged cliffs rise mixing with rustic moors.  On a clear day you can see Guernsey and Jersey from its shores.   It was here that we had our ‘Taste of Normandy’ at a tourist outpost in the town of Jobourg.  After our stop there, we took the fast road home and arrived back at the ship in plenty of time for dinner.   Our farewell dinner was once again at the Chef’s Table, another superb meal that will be covered for The Daily Meal.

It was our last night aboard.  The distance to Le Havre, where we would disembark, was under 80 miles and so Viking Sea waited till after 10 PM to sail.  We gathered with our new-found friends in the Explorer lounge.  We called it early since we had last minute packing to do and since, sadly, this would be our farewell to Viking Sea. The only thing that took away from the melancholy was what lay ahead: Paris.
Author: Monte Mathews
Filed Under: Cap de La Hague, Cherbourg, Le Veritable Cherbourg, Normandy. France, The Umbrellas of Cherbourg, Viking Ocean Cruises, Viking Sea Maiden Voyage
The Daily Meal has just published my story: Are these the best alternative restaurants afloat? Plus a recipe for a Pistachio Torta from Viking Ocean Cruises.
The Daily Meal has just published my latest Viking Ocean Cruises article! And here it is!