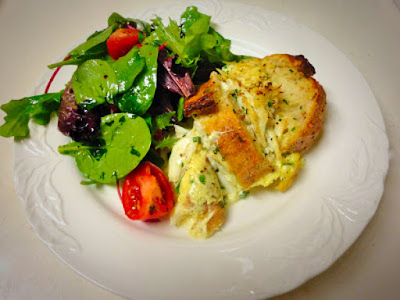 Because we’re barely off the plane from Europe, I have gone archival today to bring a wonderful recipe that I published way back in 2012.  It was such a hit with everyone who tried it that I thought I’d introduce to the whole new audience who weren’t following Chewing the Fat way back when.  And for those of you who were, it’s still a great idea for dinner or lunch.
When I came across this recipe in Food and Wine, I tried to resist it.  With its glorious crabmeat peeking out from layers and layers of French bread and creamy egg-y custard, I though it would be far too rich, far too full of carbohydrates and just far too much all the way around.  But then when I pointed it out to Andrew, he too had glommed onto the allure of the dish.  So I made it.  And I am so glad I did!  It is not heavy at all. Its richness comes from the crab and not the custard.  Lemon juice lightens the whole dish and I confess to cutting back on the butter and using a delicious whole wheat baguette to cushion the carb count.  It was simply delicious served with a green  salad.  There were leftovers, which I brought to a friend and disappointed Andrew who was looking forward to another delicious go at it.  And where did this delicious concoction come from? 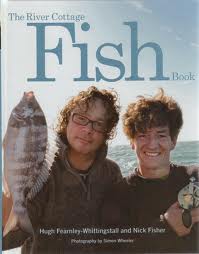 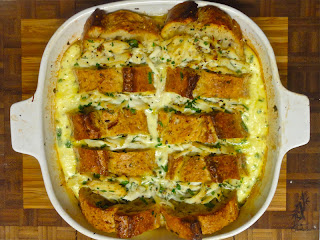 The only real regret I have is that I made this in the city where our baking dish selection is limited. So my version did not have the visual panache of the original photograph by Kate Mathis, pictured at the top of this post.  Instead, mine was not packed in.  It was considerably smaller than the Bon Appetit version, but my, was it good.  I cut the recipe back but the one I am publishing is for the full dish which is said to serve 8 people.  That would give everyone a serving that would likely make a reasonable appetizer or a light supper or lunch.  It’s so satisfying that you don’t need a lot.  And you can put it together in under a half hour before baking it for another half hour.  Here is the recipe:
Recipe for Buttery Crab Bread Pudding from Hugh Fearnley-Whittingstall’s “River Cottage Fish Book”(with Nick Fisher (Bloomsbury 2007)
10 ounces lump crabmeat, picked over
1 tablespoon finely chopped parsley
1 tablespoon finely chopped chives
2 teaspoons fresh lemon juice
Pinch of cayenne pepper
Kosher salt and freshly ground pepper
1 stick unsalted butter, softened, plus more for greasing the dish
One 24-inch day-old baguette—ends trimmed, bread cut into 3/4-inch slices
4 large eggs
1 cup milk
1 cup half-and-half
Preheat the oven to 350° and butter a 9-by-13-inch ceramic baking dish. In a medium bowl, toss the crabmeat with the parsley, chives, lemon juice and cayenne. Season with salt and black pepper. 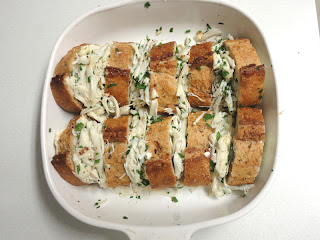 Butter each baguette slice and stand up the slices in the prepared baking dish. Using a spoon, tuck the crab mixture evenly between the slices of bread. 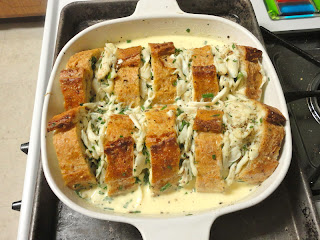 In a bowl, whisk the eggs with the milk, half-and-half, 1 teaspoon of salt and 1/2 teaspoon of black pepper. Pour the custard evenly over the bread and let stand for 10 minutes.
Bake the bread pudding for 30 minutes, until the top is lightly browned and the custard is set. Let stand for 10 minutes before serving.
Author: Monte Mathews
Filed Under: Crab, Food and Wine, Hugh Fearnley-Whittingstall, Nick Fisher, River Cottage Fish Book, Savory Pastries, Seafood
Marc Forgione’s Crab Cakes with Smoky Onion Remoulade. And they’re Gluten-Free.
Steamed Bok Choy with Mapo-Style Pork from Justin Chapple in Food and Wine Magazine