A funny thing happened on my way to making this great salad. Two funny things actually, both of them involving Kale.  (But you’ll have to wait a few words to hear them.)  The basis for this wonderfully lemon-y salad recipe came

from Anna Stockwell.  Anna describes herself as ‘a Brooklyn-based writer, editor, recipe-developer and photographer.’ Judging from the picture on her website www.annastockwell.com, she is also a looker.  She graduated from the International Culinary Center here in New York, which she accomplished while working as the digital editor of Saveur magazine.  She is now an associate editor on the Condé Nast food site, Epicurious.com.   This is a perfect dish to serve at a Spring Sunday lunch or at dinner any night of the week.  It’s one of those salads that looks as good as it tastes.  The pink mounds of salmon are interspersed with Spring Asparagus and tiny fingerling potatoes. Roasted red peppers add sweetness and color.  The lemon-y dressing is a perfect complement, not only to the salmon, but to the Kale and the Asparagus. A shower of Feta Cheese finishes off the dish with a flourish.  Now for those funny things about Kale…

Siri, that mistress of my I-Phone, and I have a very troubled history.  She doesn’t understand well over 80 percent of what I ask her.  She mangles names, locations, street addresses. She is incapable of giving simple answers.  Ask for a local florist and she’ll spew out every Google Listing from Bay Ridge to Bridgehampton.  I once tried to change her speaking voice to Canadian, thinking that would helpbut she understood me even less.  So imagine my astonishment, as I stood in a supermarket bereft of the Escarole in Ms. Stockwell’s original recipe, to hear Siri state that the substitute for Escarole is …. Kale.  Now Andrew and I don’t share the current passion for Kale. The former ornamental can be found on plates all over the place but we still prefer it in the garden. However, Baby Kale, with its milder flavor and more tender leaves, seemed to be my best bet in capturing Anna Stockwell’s intent.  And with my purchase of a bag of Baby Kale, comes the second Kale story.

While I was on Viking Star last fall, I discovered a corner of the ship that was practically deserted every morning. It was a beautiful spot high up in the ship with glistening ocean views everywhere you looked. It was home of Mamsen’s, a Norwegian ‘deli’ named for the mother of Viking’s owner, Thorsten Hagen.  It featured the most wonderful waffles, which I topped with fresh berries, sour cream and maple syrup.  I did this on several occasions, one day sitting next to a woman who was enjoying the same breakfast I was.  I mentioned my guilt over my breakfast selection and she told me the following story: Her husband, in preparation for their European trip, began drinking Kale smoothies on a daily basis.  Suddenly, he felt un-well and went to see his doctor.  He was suffering from something called Hyperkalemia.

It seems that you can indeed eat too much Kale.  I had to run to WebMD to track down Hyperkalemia but here it is, quoted directly:
“Hyperkalemia is a medical condition associated with high amounts of potassium in your blood. Hyperkalemia symptoms may include muscle weakness, fatigue, diarrhea and chest pain. If you are consuming too much kale through your juice diet and you are diagnosed with hyperkalemia, your doctor may recommend a low-potassium diet. Along with kale, other foods to avoid on a low-potassium diet include potatoes, oranges, orange juice, broccoli and spinach.”
Well you sure won’t catch us eating too much Kale.  However, moderation in all things means you can enjoy this gorgeous –and healthy- salad at least once a month! It’s very simple to make. You bake the fish, steam the vegetables, whisk the salad dressing together, combine the ingredients, shower them with crumbled Feta Cheese and Voilà!  Here is the recipe:
Recipe for Lemon-Roasted Salmon with Asparagus, Kale and Potatoes adapted from Anna Stockwell on Epicurious.com
Serves 4. Active Time: 20 minutes. Total Time 40 minutes. 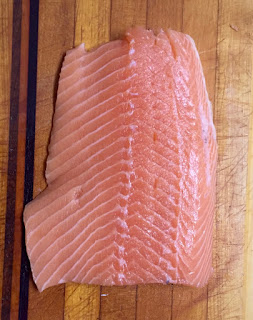 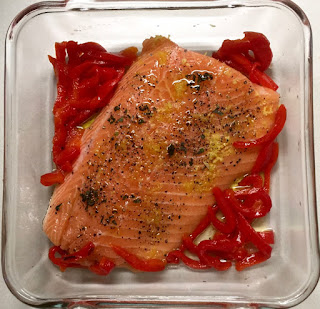 Preheat oven to 300°F. Place salmon in a baking dish and rub with lemon zest, oregano, salt, and pepper on all sides, then coat with oil. Arrange peppers around salmon. Bake until salmon is firm but still pink in the center, about 20 minutes (if you prefer salmon more well done, cook an additional 5 minutes). 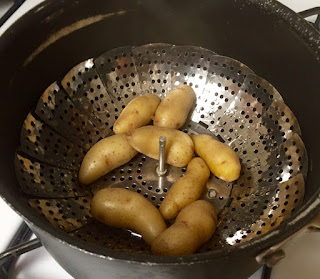 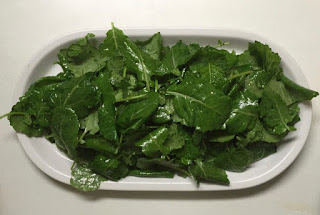 Meanwhile, whisk oil, lemon juice, honey, salt, pepper, and 1/4 cup dill in a small bowl or measuring cup. Toss Kale with half of the dressing in a large bowl, then transfer to a serving platter. 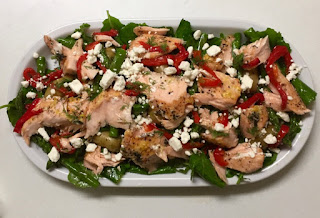 Toss potatoes and asparagus with remaining dressing in same bowl, then arrange over the baby Kale. Flake salmon into large pieces and arrange on platter. Top with feta, peppers, and dill sprigs.

3 thoughts on “Lemon-Roasted Salmon with Asparagus, Kale and Potatoes”