It was a night I wanted to cook something special just for the two of us.  I opened the pages of the book and there in front of me was an utterly attainable plate with a single crispy-skinned chicken breast, some very green peas intermingled with tarragon I could almost smell, some jus on the plate and what looked like a piece of beautifully browned loaf of bread.  I had to flip back to see the title of the recipe to know what it was.  It was described as Roasted Garlic and Tarragon Brioche Pudding.  I knew I had my dinner for two. 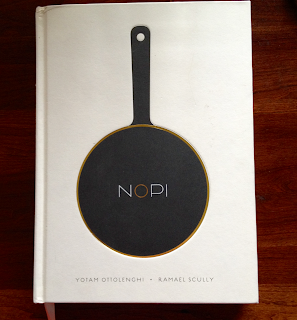 Under the Christmas tree’s bounty of new cookbooks was NOPI, a magnificent looking volume, the work of London’s great Yotam Ottolenghi and one Ramael Scully.  I had done a quick dive into the book and, in an email to my friend Julia in London, I expressed my astonishment. Chef Ottolenghi had drifted away not only from the vegetarian cooking that has made him so famous, but also appeared to have abandoned Judaism judging from the number of recipes for shellfish and pork.  My problem was my complete ignorance as to who Ramael Scully was.  This book, published by Ten Speed Press (2015), is really Scully’s cookbook. Ottolenghi makes that very clear once you actually read the Introduction. But I’d torn into the book to stare at its stunning images.  Ottolenghi is one of the most fascinating men in food and, as it turns out, so is Scully.

For the uninitiated, Yotam Ottolenghi was born in Jerusalem to Israeli-Italian Jews.  After getting a Master’s Degree in Comparative Literature, he went to London planning to start a PhD. Program. But before he did that, he took a signed up at Le Cordon Bleu for a 6 month course.  From there he got a job as Head Pastry Chef at a London boutique bakery.  There he met Sami Tamimi, an Israeli Palestinian.  Three years later, the two and a partner named Naom Bar, opened the first of what was to become a four deli empire, in Notting Hill.  The two co-authored “Ottolenghi: The Cookbook” (Ten Speed Press 2012) and “Jerusalem: A Cookbook” (Ten Speed Press 2013). Despite this incredible output and the delis, somehow the partners felt the need to open what Yotam calls “a grown-up restaurant”, hence the opening of NOPI in London’s Soho in 2011.

Ramael Scully is an Australian.  But that hardly describes his background: He was born in Malaysia to a mother whose family were Chinese and Indian and to a father whose bloodlines were Irish and Malay.  He started work at Ottolenghi responsible for a menu of hot dishes served evenings at the Ottolenghi branch in Islington.  Ottolenghi is famous for its Mediterranean food.  To this Scully brought Asian flavors that frightened Yotam and Sami at first.  But eventually the partners saw that his fresh set of flavors enhanced the experience of dining at NOPI and NOPI, the cookbook, is the result.  At the outset, Yotam tries to scare us off by writing that this is indeed a restaurant cookbook: Unlike his others, which were created for home cooks, these recipes are more challenging.  That may be true of many of the recipes in this stunning book but the one that caught my eye is a piece of cake. 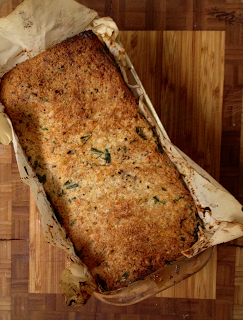 The recipe for Roasted Garlic and Tarragon Brioche Pudding is accompanied by two others: one for Pea and Tarragon Jus and the other from Chicken Supremes, sautéed on the stovetop. I didn’t include these recipes because, quite honestly, I am sure you know how to cook peas with a sprig of tarragon and to sauté a chicken breast before finishing it in the oven for 12 to 15 minutes. I don’t want to put you off the main event on this plate, which is undeniably this wonderful airy, light, garlic-scented masterpiece.  The recipe is for 6 servings.  So after it initial pairing with the recommended chicken, I was able to serve it as a side with pork and another with a flank steak. It elevated both dishes far above what the level they’d normally rise to.  I’d recommend this for a dinner party dish that will please the most challenging gourmet.  It takes time to prepare but the results are well worthwhile. Here is the recipe:

Recipe for Roasted Garlic and Tarragon Brioche Pudding from NOPI’s Ramael Scully and Yotam Ottolenghi.Serves 6. Takes a good 2 hours to make, much of the time spent either resting or in the oven. 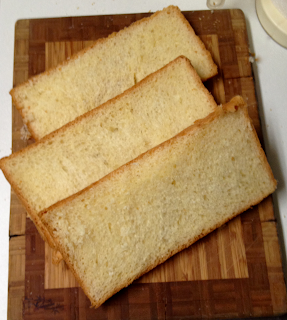 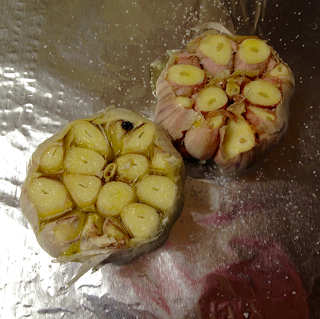 2. Slice off and discard the top quarter of each garlic head so that the cloves are exposed. Place the heads on an 8 inch square of aluminum foil, cut side up.  Drizzle with 2 tablespoons of the olive oil, sprinkle with salt, wrap in a tight bundle and roast in the oven for 35 minutes until the garlic is soft and caramelized.  (I used a toaster oven for this.) 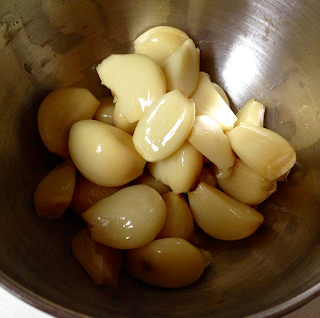 3. Remove from the oven, set aside for ten minutes, then squeeze the garlic cloves out of their skins, along with the oil.  Put the cloves into a small bowl and use the back of a fork to crush them into a fine paste.

3. Place the eggs in a medium bowl and whisk.  Add the cream, nutmeg, cinnamon and tarragon, along with 1 tsp. of salt and a good grind of black pepper. Whisk well and set aside.

4. Lightly grease a 9 by 4 inch loaf pan with butter and line it with parchment paper.  Brush a bit more butter on top of the parchment once it’s inside the pan. 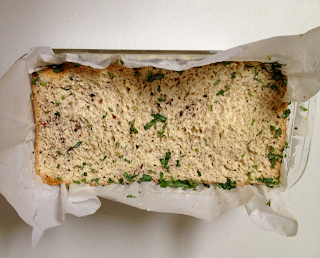 5. Spread half the roasted garlic purée on top of one of the three slices of brioche.  Place the slice of brioche in the loaf pan and pour a third of the cream mixture over it.  Repeat this process with the second slice of brioche. Top the second slice with the third and pour the remainder of the cream over the top layer. Lightly press down of the brioche so that it is fully submerged.  Set aside for 30 minutes to let all the liquid soak into the brioche.

6. Transfer the pudding to the oven and bake for 25 to 30 mins until the pudding is cooked through and the brioche is golden brown on top. Check that it is done by inserting a knife through the middle: it should come out clean.  Remove from the oven and set aside to rest for 15 minutes before removing the loaf from the pan, with the paper still attached.  Transfer to a baking rack to cool, then remove and discard the paper. Trim the ends and cut the pudding into six 1 ½ inch slices. Set aside.