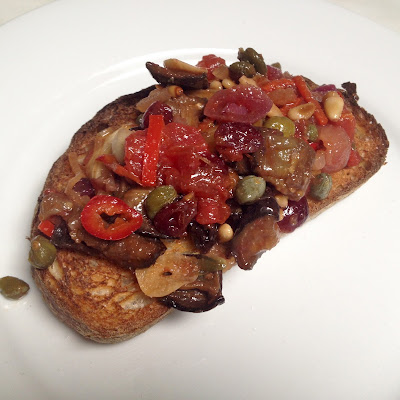 “Dear Bon Appétit”, wrote Phyllis Follet of Cambridge, Massachusetts, “My husband and I celebrated our 44th Wedding Anniversary at Ribelle in Brookline, MA.  The caponata was astounding. Would the chef share the recipe?”  And Ribelle (1665 Beacon St., Brookline, MA 02445 Tel: (617)232-2322) did, of course, share it.  I have only had Caponata several times but the dish left such a vivid impression, that I was delighted to find its recipe.  Caponata, an antipasto dish of eggplant and tomatoes is Sicillian, or at least has been claimed by Sicily ever since its documented appearance there in 1709.  But, hark, Sicily may not have invented the dish all by itself.  Set in the Mediterranean Sea, caponata likely came from Spain. There, in Catalunya ‘caponada’, a similar kind of relish, is made.  The Catalan word “capon” is used to describe “Capón de Galera”, a gazpacho or caponata-like dish served aboard ship. It’s believed that it served as a mariner’s breakfast because of the large amount of vinegar used, which would have acted as a preservative.  But the chefs at Ribelle have taken quite a bit of license with Larousse’s description of caponata: “ A Sicilian specialty made of aubergines, celery and tomatoes….flavored with capers, olives and anchovy filets.”   Take heart, anchovy and olive haters, there’s none of that here!

Instead, the caponata at Ribelle starts with eggplant and doesn’t go near any celery.  That ingredient is replaced with fennel.  There’s sweet red onion, relatively mild Fresno chiles, garlic and for crunch, pinenuts (pignoli). And perhaps because this is New England, sweetened dried cranberries are in, capers are out.  I couldn’t bear the idea of Caponata without Capers so I added an entire 3 oz. bottle of them.   The rest of the recipe I followed to a T.  This is not your fastest recipe to prepare: There’s a 3 to 10 hour period when the salted eggplant sheds its bitterness in the fridge.  (I went with 4 hours).  From then on it’s relatively easy. You can cook the fennel and the eggplant while prepping the rest of the dish.  This is a very chunky caponata.  Ribelle serves it on slabs of grilled or toasted ‘country style’ bread.   It is almost too chunky to serve as a cocktail accompaniment, which is too bad, because that’s how I remember my last encounter with the dish.   But as a Meatless meal, it’s perfect.  Bon Appetit suggests serving it as a side dish with fish or grilled pork.  How is that for versatility? Here is the recipe:
Recipe for Caponata with Pine Nuts from Ribelle Restaurant, Brookline, MA
Serves 6 Appetizer portions. 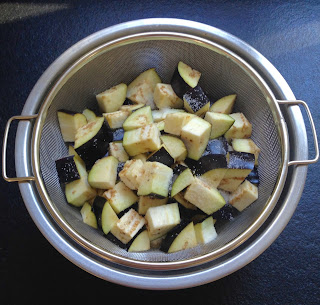 1. Toss eggplants with 2 tablespoons salt in a colander set over a bowl; chill 3–10 hours. 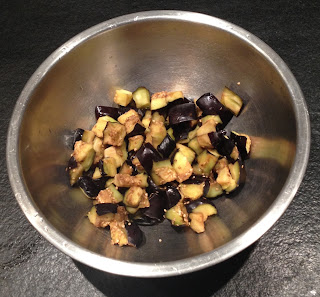 2. Gather up eggplants in a kitchen towel; squeeze out excess liquid.
3. Combine eggplants, fennel, and vegetable oil in a large heavy pot set over high heat and cook, stirring occasionally, until eggplants are golden brown and fennel is soft, 20–25 minutes. Transfer vegetables to paper towels to drain; let cool slightly.

4. Meanwhile, toast pine nuts in a small dry skillet over medium-low heat, tossing often, until golden brown, about 4 minutes. Transfer to a plate. 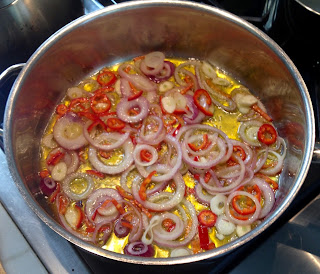 5.Heat olive oil in a large skillet over medium. Cook onion, chiles, and garlic, stirring occasionally, until tender but not browned, 6–8 minutes. Stir in paprika and cook until fragrant, about 1 minute. 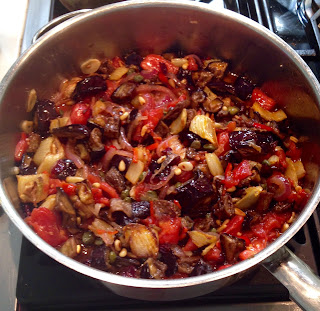 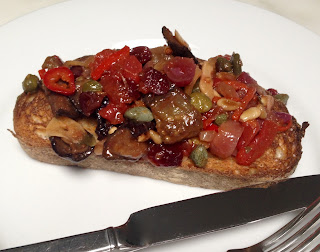