I’ve written at length previously about Cinco de Mayo, the May 5th salute to Mexico that’s more American than it is Mexican.  There it is celebrated in the province of Puebla and almost nowhere else.  So this year, I thought I’d introduce you to the history of one of my favorite make-at-home Mexican dishes, the fajita.  And like Cinco de Mayo, it’s not really Mexican either. It hails from the state that’s created Mexican cuisine all its own. That of course is Texas where Tex-Mex cooking began. In sharing the history of the fajita I leaned heavily on a ten year old article by Virginia B. Wood, who wrote it for the Austin Chronicle.  Thank you Virginia!

Astonishing to me, at least, is that the fajita only fairly recently burst onto to the Tex-Mex Cooking scene.  It arrived in 1969 when a man named Sonny Falcon, a meat market manager in Austin, opened the first commercial Fajita Taco concession stand in the tiny town of Kyle Texas.   There was apparently a run on fajitas because that same  year, the dish made its debut on the menu of the Round-Up Restaurant in the Rio Grande town of Pharr, Texas.  The restaurant was owned by one Otilia Garza whose daughter Tila still owns the place.   There, fajitas were served on sizzling platters with warm flour tortillas and all kinds of condiments including guacamole, pico de gallo (a mix of chopped fresh onions, tomatoes, peppers and cilantro), and grated cheese.  Otilia never laid claim to having invented the fajita, giving credit to the tradition of grilling skirt steak learned from her grandmother who owned a restaurant in the border town of Reynosa, Mexico.

The Garzas may have put it on their menu but a Texas A&M student named Homero Recio researched the fajita and discovered that the cooking process, the skirt steak that is used, even the Spanish word ‘fajita’ went back as far as the 1930s on ranches in South and West Texas.   During cattle roundups, beef was regularly butchered to feed the hired hands.  Throwaway items were turned over to the Mexican cowboys or vaqueros as part of their pay.  Included among these was the skirt steak that’s essential to the dish.   It’s likely that the reason the fajita remained highly regional and obscure for years was simply because there really isn’t a lot of skirt steak per animal. 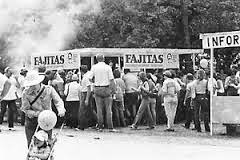 During the 1970s, the aforementioned Sonny Falcon introduced fajitas to Anglos and Hispanics alike at his concession stands at rodeos, outdoor fairs and festivals all over the state.   Then an unlikely character spread the fajita’s fame far and wide.  He was the German born chef George Weidman.  Weidman opened the Hyatt Regency in Austin and quickly recognized the appeal of the ‘sizzling fajita’, which he not only put on the Hotel’s La Vista Restaurant menu, but was quickly asked to share with Hyatt Regency chefs all over the country. To this day, you’ll find them on many a Hyatt hotel menu.  There was one other Weidmann contribution to the fajita: precisely because skirt steak is in relatively short supply, he used the more tender and more readily available sirloin for his.  Chicken, shrimp and vegetable versions were not far behind.
The real thing however, is what this recipe is all about. Its roots are in Nuevo León, which is the state right next door to where Otilia Garza’s grandmother lived.   The technique and the cut of meat make a legitimate Arrachera al Carbon.  The addition of the red and green peppers, the scallions and the tomato seem to be Tex-Mex additions. The colors, textures and tastes they add are immeasurable even if they step away from the traditional recipe.  They look simply beautiful.  So make these and celebrate Cinco de Mayo like it’s 1969 at Sonny Falcon’s.  Serve them with sides of guacamole and salsa as a stand-in for pico de gallo. You can be forgiven for buying these last two ingredients already made up at your local supermarket.  Here is the recipe:
Recipe for Arrachera al Carbon, Skirt Steak Fajitas from Saveur Magazine.  Serves 4. Allow 8 hours for marinating skirt steak. Under 30 minutes cooking time. 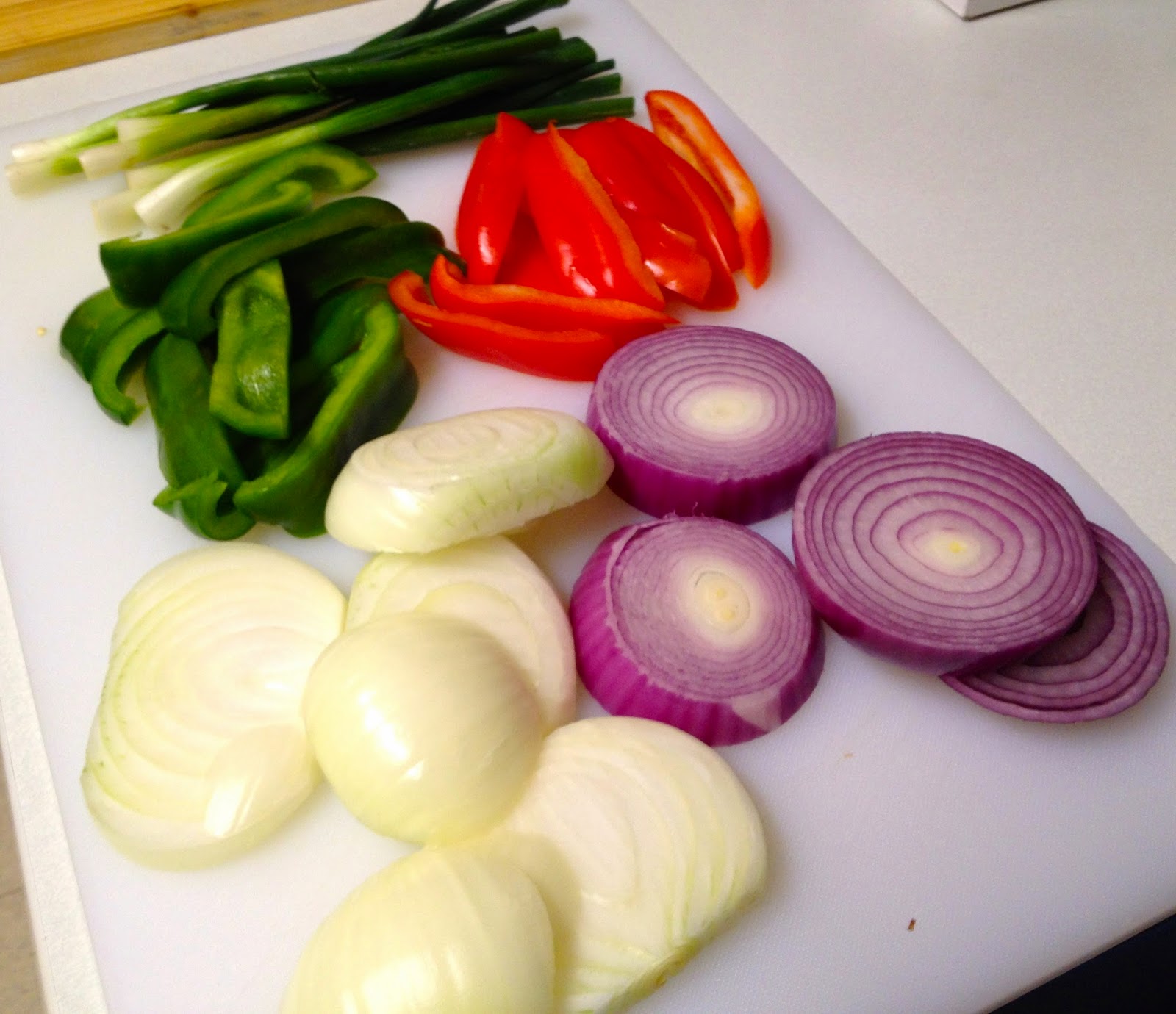 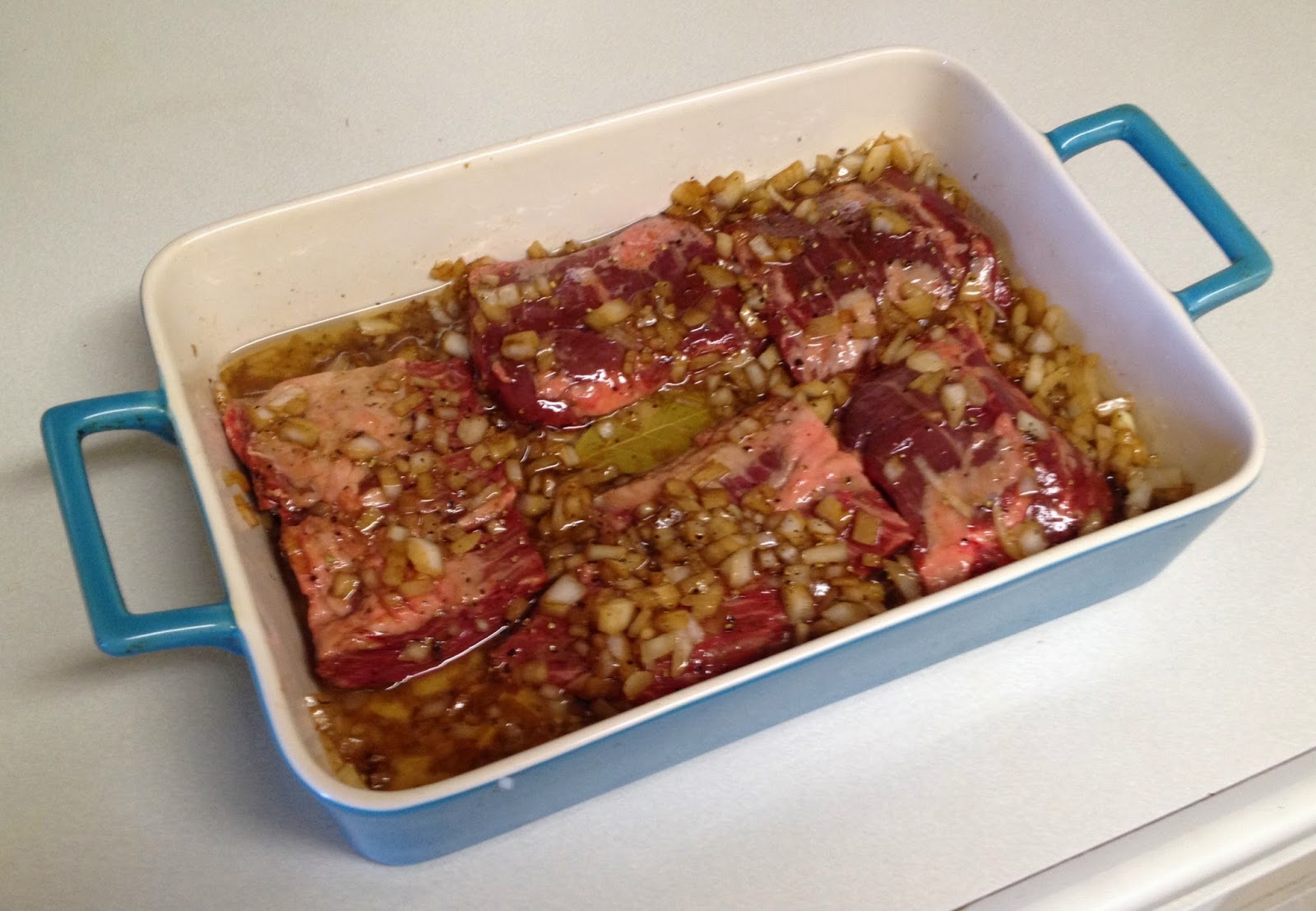 1. Finely chop 1 of the onion halves and put into a large deep glass or ceramic dish. Add 3⁄4 cup of the oil, worcestershire sauce, liquid smoke, bay leaf, black pepper, and salt to taste and mix well. Add meat to dish and turn in marinade until well coated. Cover dish with plastic wrap and marinate meat in the refrigerator for at least 8 hours and up to 12 hours. 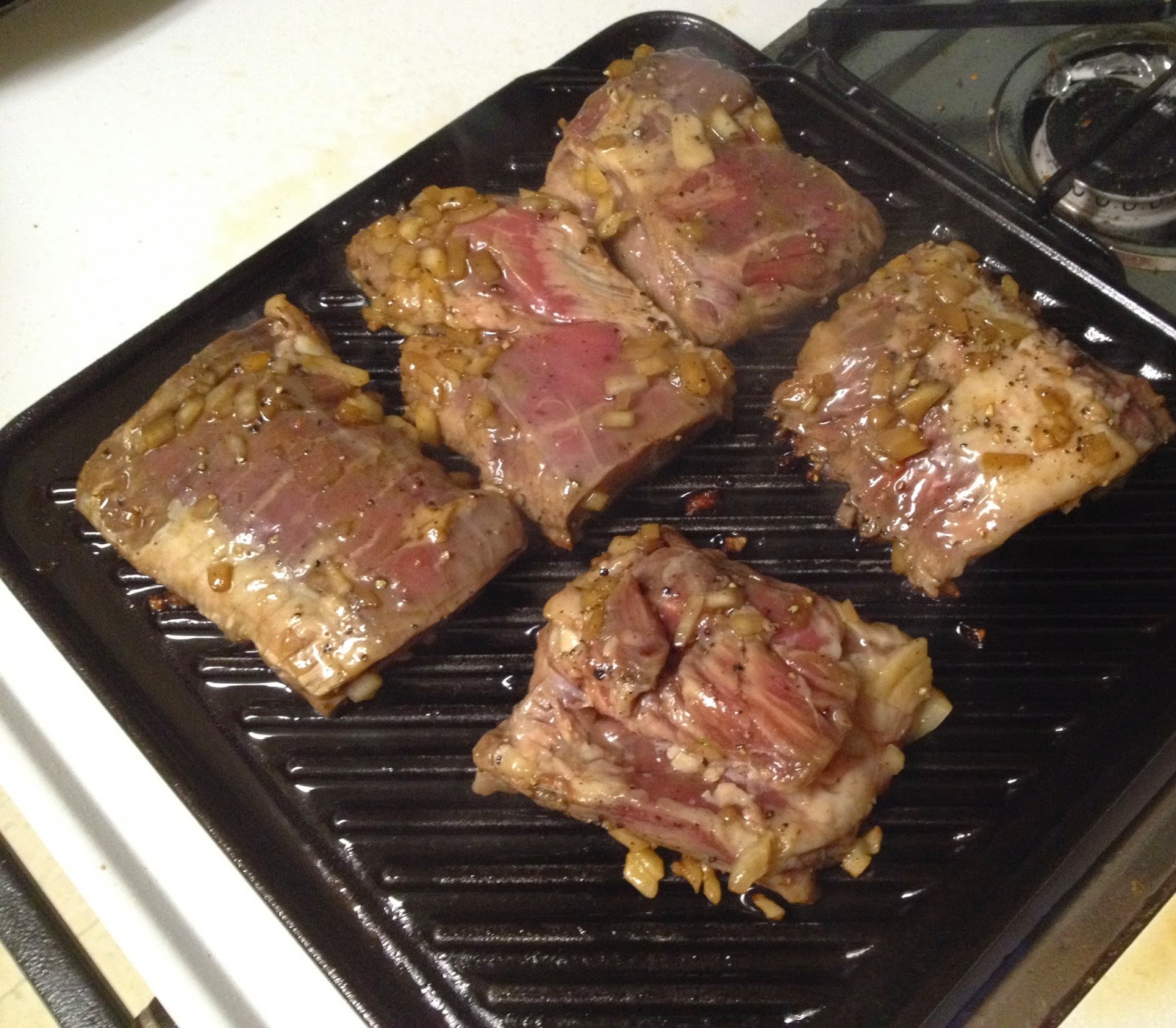 2. After steak has marinated, heat a charcoal grill until coals are hot. Remove meat from dish, discarding marinade. Grill meat over hot coals or hot griddle, turning once, 4–6 minutes for medium rare. (You may also cook meat in a grill pan on the stove over high heat.) Transfer meat to a cutting board and set aside. 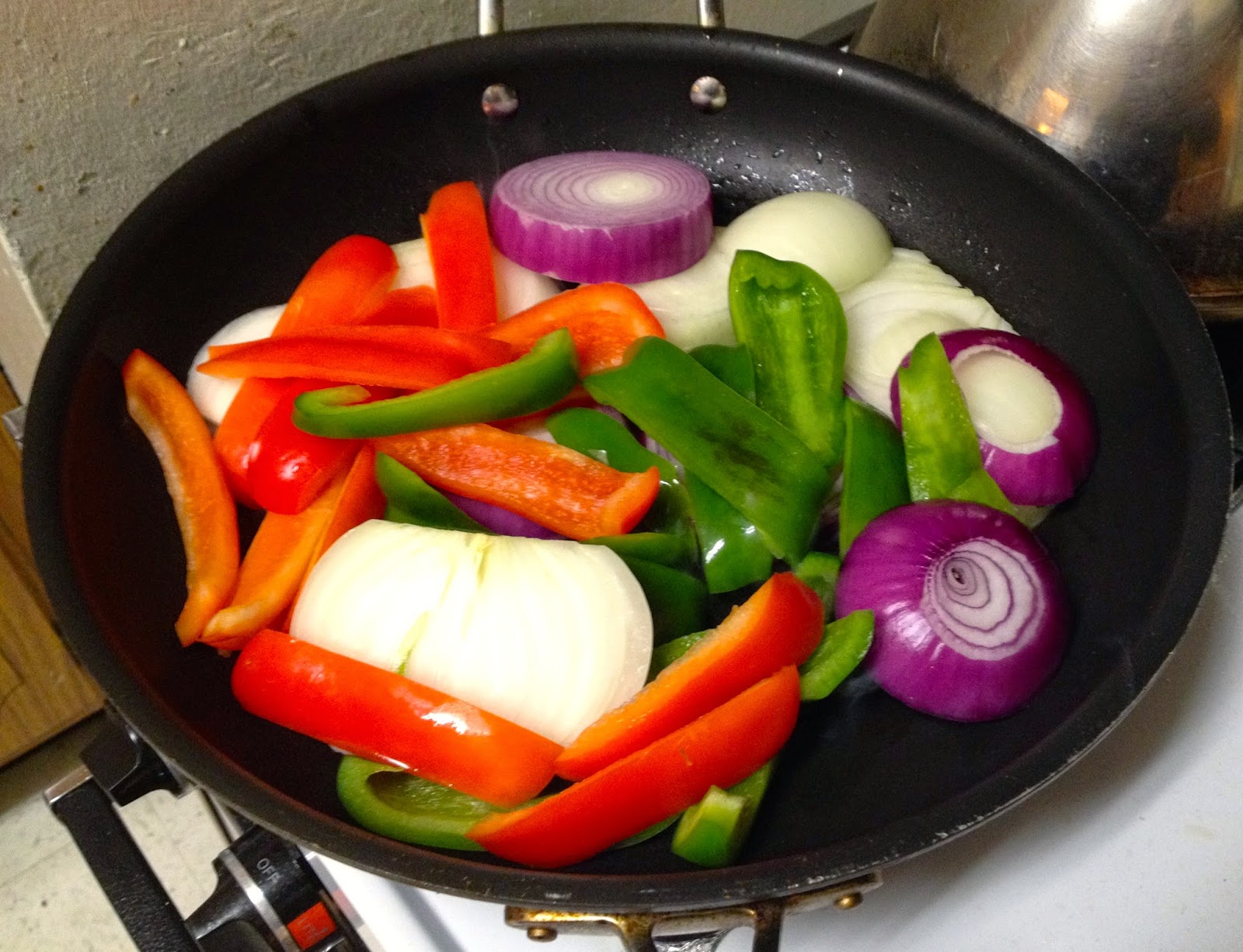 3. Thickly slice the remaining 2 onions lengthwise and set aside. Heat the remaining 1 tbsp. oil in a large skillet over medium-high heat until hot but not smoking. Add onions and bell peppers, season to taste with salt, and cook, stirring often, until vegetables are lightly charred but still crunchy, 3–4 minutes. 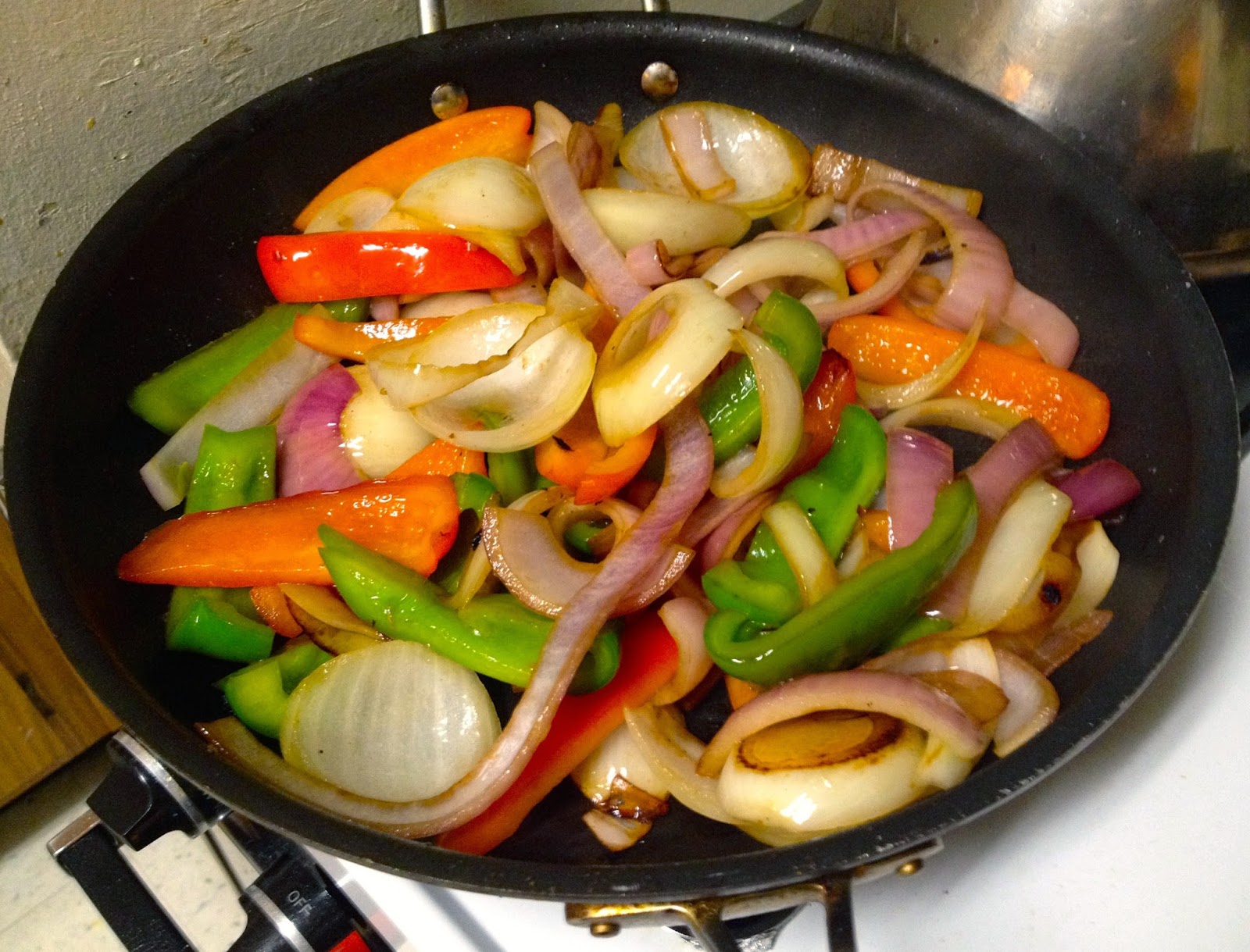 4. Meanwhile, thinly slice meat against the grain, add to skillet with vegetables, and stir until heated through, 1–2 minutes. 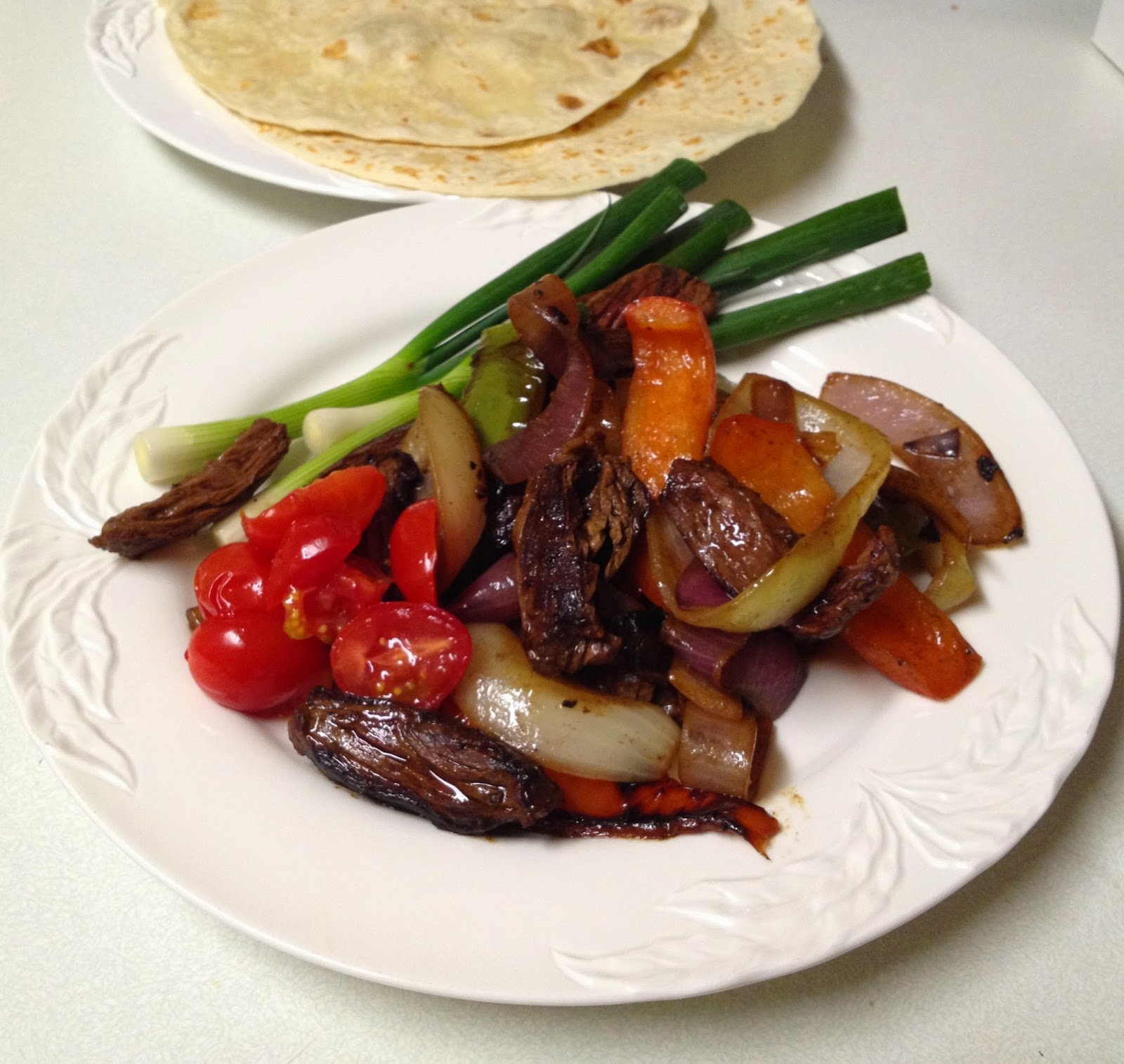