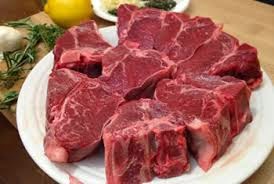 I am a big fan of the loin lamb chops that you can buy at Costco in packages of between 10 and 12 chops. They are all completely trimmed with none of the extraneous fat I often see on the chops in the butcher case at our supermarket for lots more money.  That being said, they don’t exactly inspire me to do much more than stick them under the broiler for a few minutes, occasionally drizzling Worcestershire sauce over them.  This summer, I tried a cumin rub with less than stellar results.   So I was very pleased to find a recipe from a Seattle chef that dresses up these quick and easy chops at dinnertime.   Actually, the recipe doesn’t do any more to the chops than rub them in olive oil and use a heavy hand in seasoning them with salt and pepper.  It’s the Cucumber relish that makes the meal here and makes it so easily.  The active time preparing the dish is all of 20 minutes.  Add in the cooking time and you’re out of the kitchen in just 45!

Renee Erickson is featured in Food and Wine’s “Chef’s Easy Weeknight Dinners”(2014 Time Inc. Affluent Media Group), the book I spent a lot of December cooking from.   Ms. Erickson is the owner of Seattle’s Boat Street Café (3131 Western Avenue (Tel: (206) 632 4602) which is described as specializing in “French bistro-style dishes with Pacific Northwest ingredients.”   She is also the author of a recent book entitled “A Boat, A Whale and a Walrus” (2014 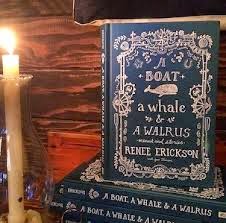 Sasquatch Books) The book appears to follow in the footsteps of New York Chef Gabriella Hamilton’s amazing “Blood Bones and Butter” (2011 Random House) –as much a memoir as a cookbook.  Since Ms. Erickson’s Chef de Cuisine is a man named Jay Guerrero, who hailed from Ms. Hamilton’s NYC restaurant “Prune”, I can’t help but wonder whether the egg followed the chicken or vice versa.

Whatever the case, when Ms. Erickson leaves the restaurant, she describes her home cooking as ‘rustic and relaxed’ even going so far as to serve white wine-steamed clams straight from the pot.  The cucumber relish pairs two things notoriously good with lamb: Mint and Cucumber.  To these are added lemon for brightness, raisins for sweetness and toasted pine nuts for some crunch along with the cucumber.  This all comes together as the lamb chops stand at the ready at room temperature.  The lamb is cooked stovetop in a hot cast iron skillet and once they are cooked and salted, the Cucumber relish is spooned over the top and the dish is served.  Here is the recipe:
Recipe for Renee Erickson’s Grilled Lamb Chops with Cucumber Relish  Active Time 20 mins. Total Time 45 minutes.  Serves 4.
3 tbsp. Extra Virgin Olive Oil
8 Loin Lamb Chops about ! ½ inches thick
Kosher Salt and Freshly Ground Pepper
1 English Cucumber, peeled and cut into ¼ inch dice
½ tsp. finely grated lemon zest
1 tsp. fresh lemon juice
¼ cup golden raisins
¼ cup pine nuts, toasted
2 tbsp. mint leaves, torn
Flaky sea salt, such as Maldon for serving. 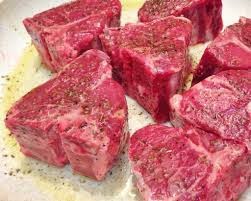 1. Rub 1 tablespoon of olive oil over the lamb chops and generously season with kosher salt and pepper.  Let stand at room temperature for 30 minutes. 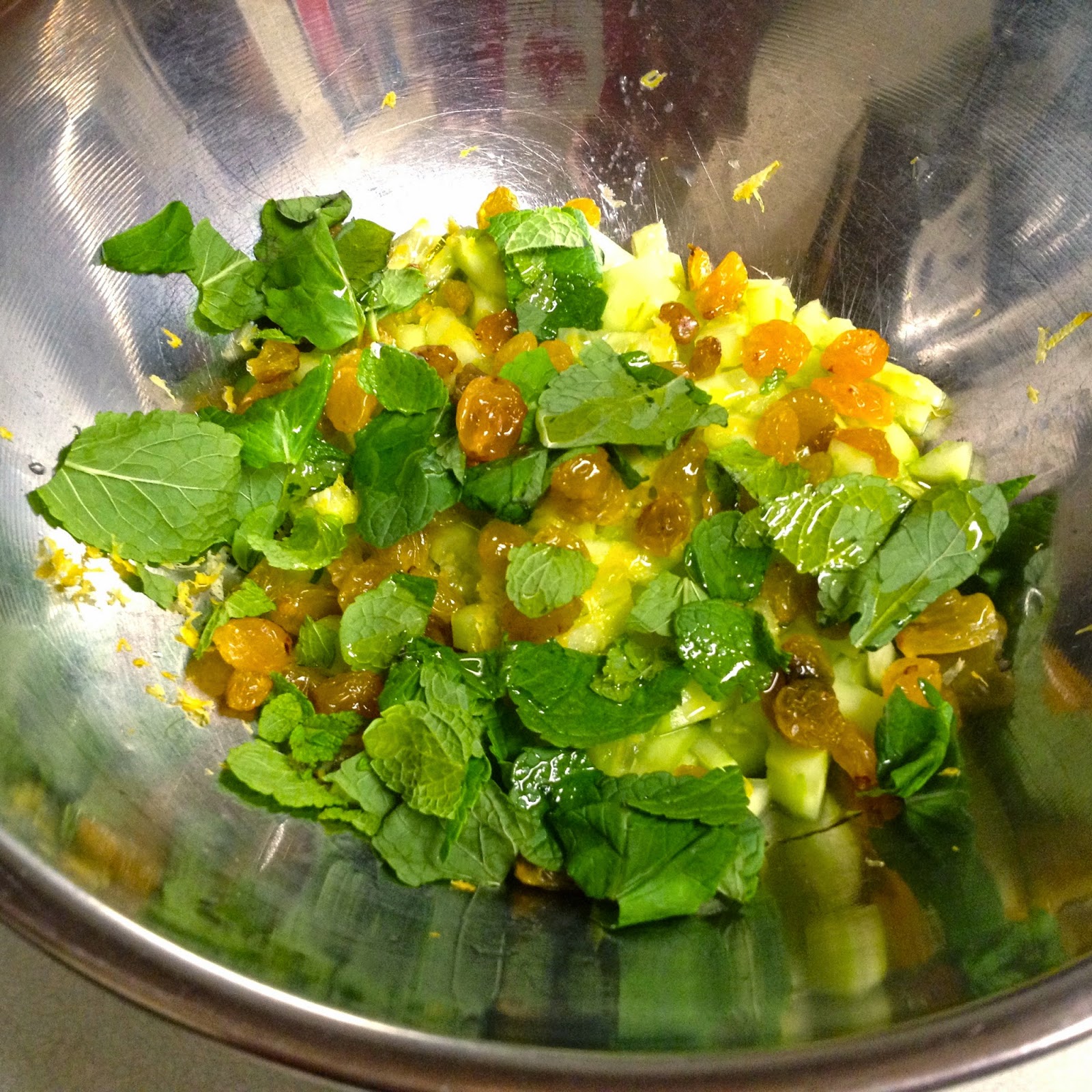 2. Meanwhile, in a medium bowl, stir the cucumber with the lemon zest, lemon juice, raisins. Pine nuts, mint and 1 tablespoon of olive oil.  Season the relish with kosher salt and pepper to taste. 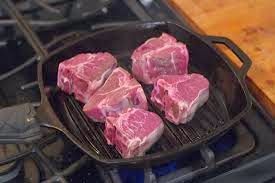 3. Heat a large grill pan or two cast iron skillets over high heat.  Divide the remaining 1 tablespoon of olive oil between the pans.  Add the lamb and cook until nicely browned on both sides and when an instant-read thermometer inserted in the center of a chop registers 125 degrees for medium rate, about 12 minutes.  Transfer the chops to plates; let rest for 5 minutes. 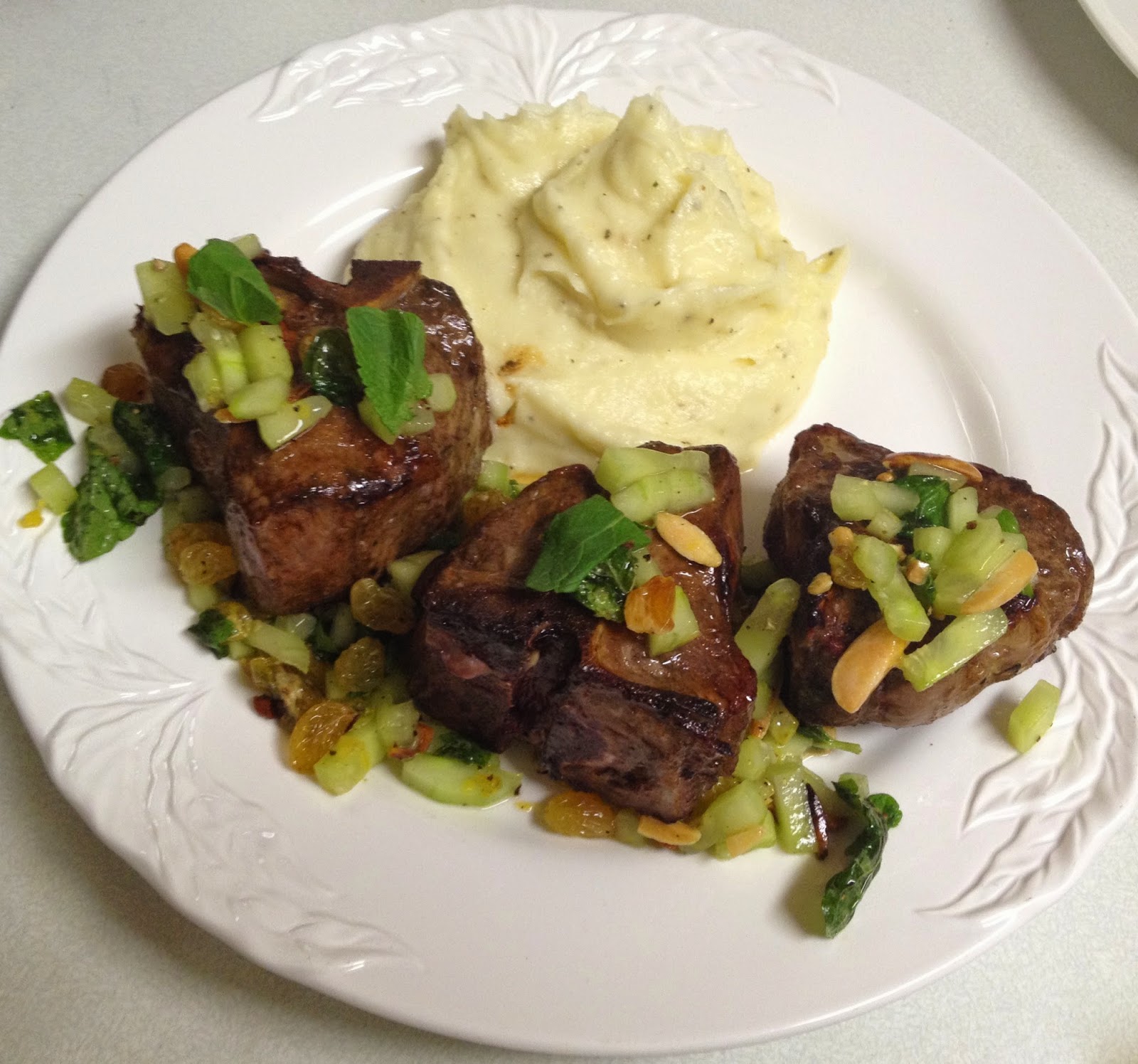 4. Sprinkle the lamb chops with flaky sea salt, spoon the cucumber relish on top and serve.