I’m always on the lookout for a great breakfast casserole for a crowd. This is because a couple of times a year I am called upon to help out at a Church breakfast.  I am a particular fan of recipes that call for refrigerating the dish overnight.   The next morning all you do is stick the thing in the oven while you set the table and get out the juice and coffee.  On “Chopped”, the television show where chef contestants are confronted with basket of ingredients and asked to whip up a meal out of them, Andrew and I always get a laugh at how many end up making French Toast as their dessert course.  Of course they never call it that.  It’s always Pain Perdu, which isn’t wrong because that’s what the French call French Toast.  The best version of French Toast I’ve ever tasted is Ina Garten’s.  What makes hers so memorable are two things that I’ve incorporated into today’s recipe.  She uses orange zest and the bread she prefers is Brioche.  Now it seems to me that if you use Brioche, you could easily pass off your French Toast as Pain Perdu and get away with it a lot more cleanly than if you’ve used Pepperidge Farm White Bread.  But Ina is a lot more down to earth than any contestant I’ve ever witnessed on Chopped.  So she calls it French Toast.  And so will I. 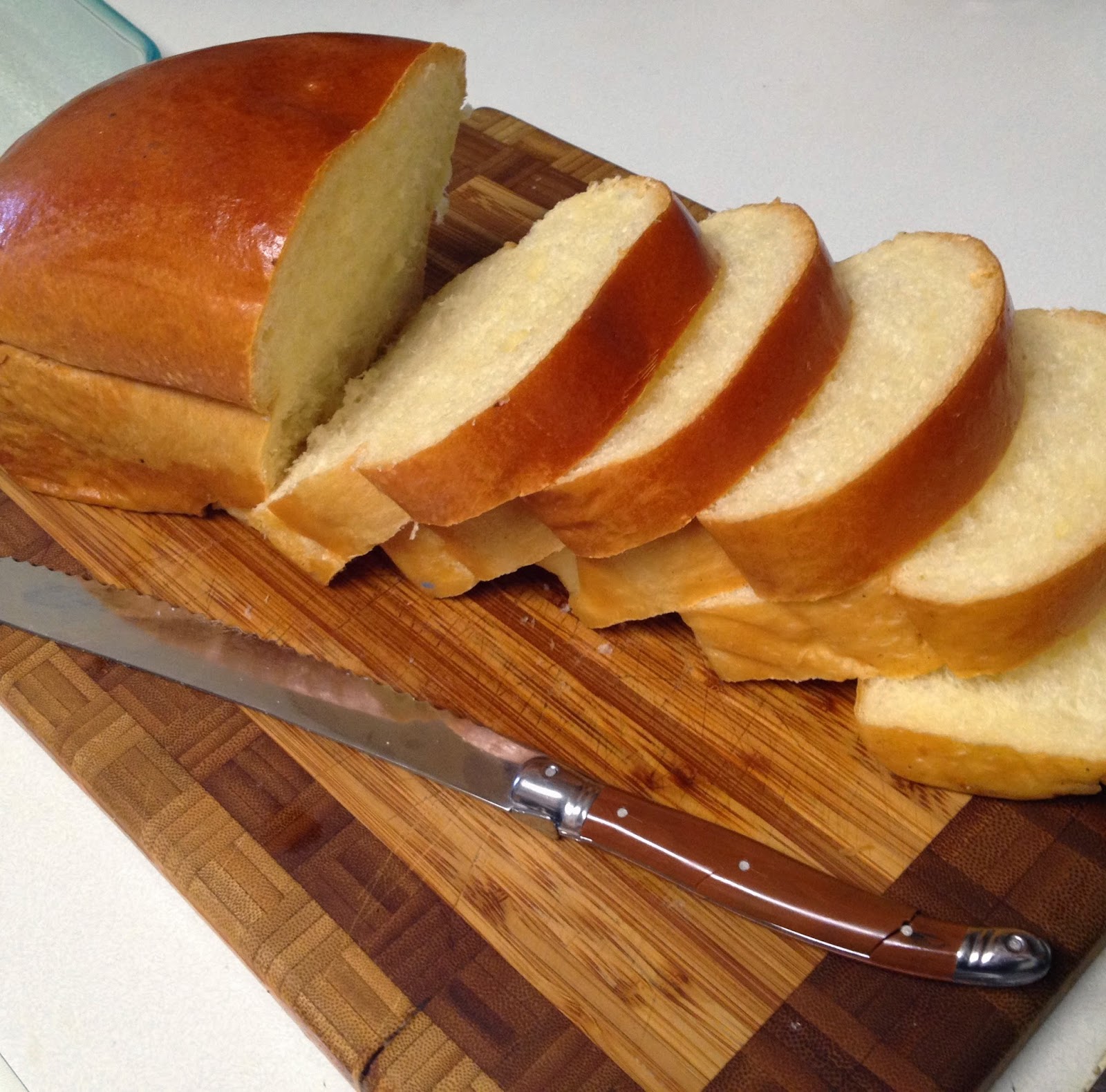 This is an easy recipe to do.  I bought two loafs of Brioche at our local grocery store which happens a very good bakery as part of its operation.  The other major component is Seville Marmalade. Seville Oranges are sometimes called “Bitter Oranges”.  They are prized for making marmalade because they are higher in pectin than sweet oranges.  Pectin helps jams set properly giving marmalade its body. You can buy any number of Seville Orange marmalades.  The one I am most familiar with is the Hero brand, which is Swiss and which, coincidentally, is the basis for Monte’s Ham Original Glaze.  But I was fortunate in that my cousin Barbara had given me some of her own hand-preserved marmalade last time I was in Canada. What wonderful stuff it was—loaded with peel and deep orange flavor.  The marmalade is sandwiched between two thick slices of buttered bread.  Then the egg milk and cream mixture is ladled over the entire dish and into the refrigerator it goes.  In the morning, you sprinkle chopped walnuts over the top and put the dish into a 350-degree oven for 45 minutes.

While the casserole bakes, a navel orange is pressed into service. You add the peel and the juice of the orange to whatever syrup you wish. If you are the least bit Canadian, the obvious choice is the maple syrup that no self-respecting Canadian’s pantry ever lacks.  However, Log Cabin will certainly do in a pinch and now it’s no longer made with high fructose corn syrup.  You can either make your syrup on the stovetop or in the microwave. 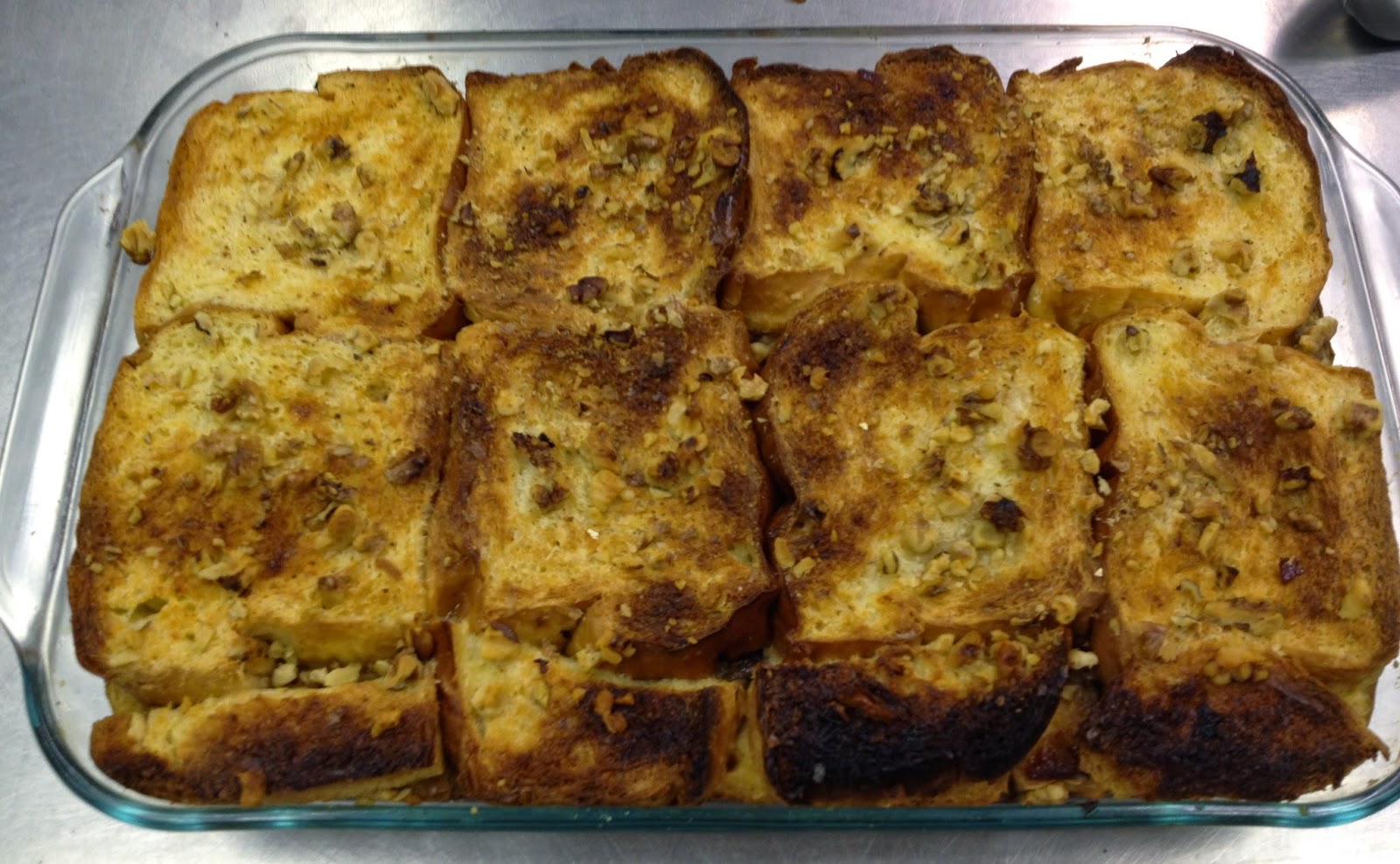 The French Toast casserole rises and once it’s brown on top, it comes out of the oven and rests for 15 minutes.  I cut it into 2-inch squares.  This may sound small to you but this is a rich dish especially when topped with syrup.  I’d highly recommend serving breakfast sausage, bacon or a certain all-natural ham with it for a savory contrast.   The entire 10 x 15 inch pan was devoured by a ravenous group of Episcopalians.  They loved it.  (I always knew Episcopalians had great taste.)  Here is the recipe:
Recipe for Marmalade French Toast Casserole with Walnuts on top.  Assembly takes 15 minutes.  Rest overnight in refrigerator.
Cooking time 45 mins.  I used a 10 x 15 inch Pyrex dish.  Feel free to use a 9 x 13 inch if that is what you have.
For the Casserole:
¼ lb (1 stick) unsalted butter, softened
2 (16-ounce) loaves of Brioche Bread cut into ¾-1 inch slices
Cooking spray
1 (12-ounce) jar Seville orange marmalade
2 cups Whole milk
1 cup Half and Half
1/2 cup sugar
1 teaspoon vanilla extract
1/4 teaspoon ground nutmeg
8 large eggs
1/2 cup finely chopped walnuts
For the Orange Flavored Syrup:
1 Whole Navel Orange
2 Cups Log Cabin or Maple Syrup
Preparation 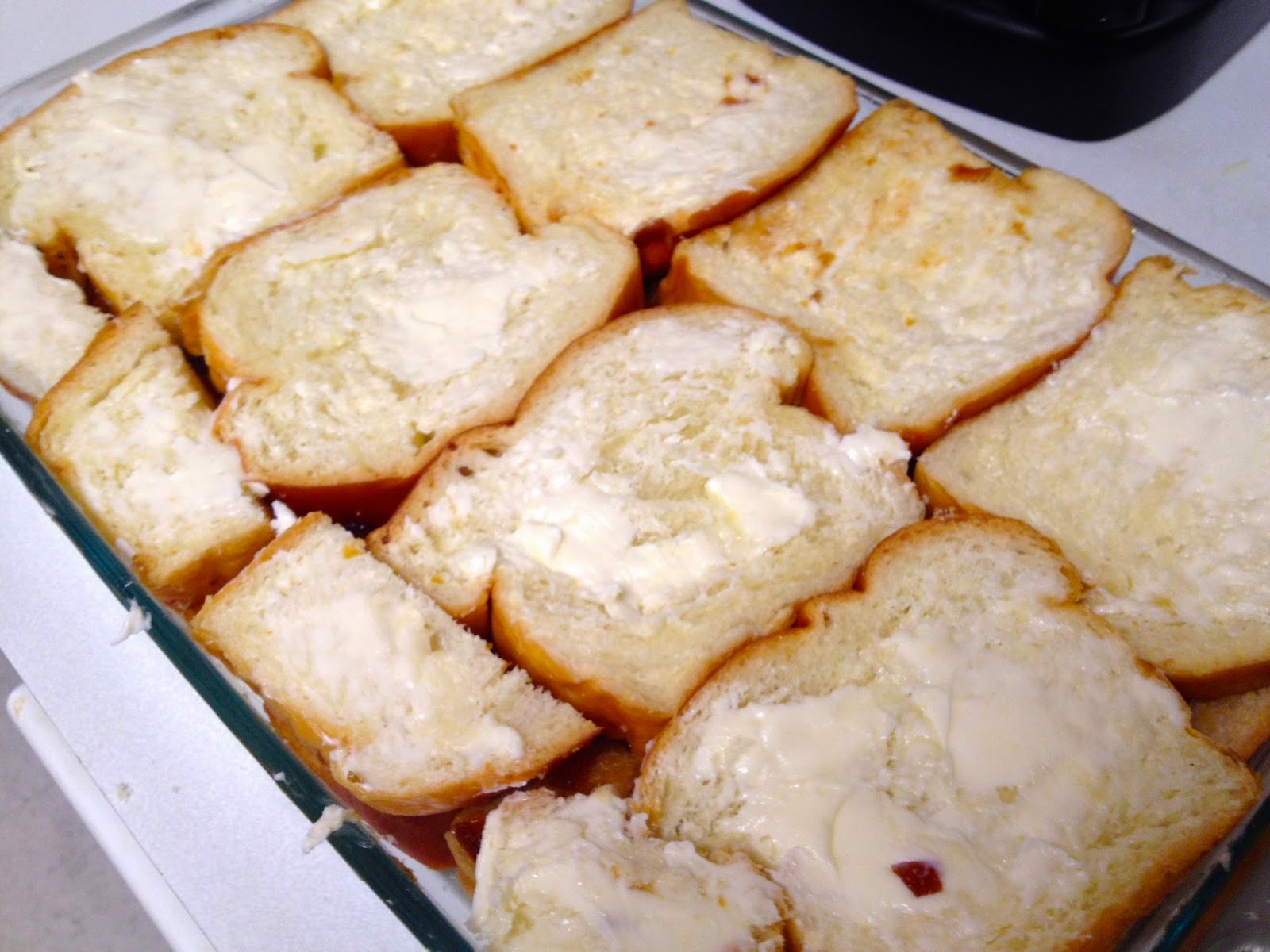 1. Spread softened butter on one side of each bread slice. Arrange 12 bread slices, buttered side down, slightly overlapping in a single layer in a 10 x 15-inch baking dish coated with cooking spray. 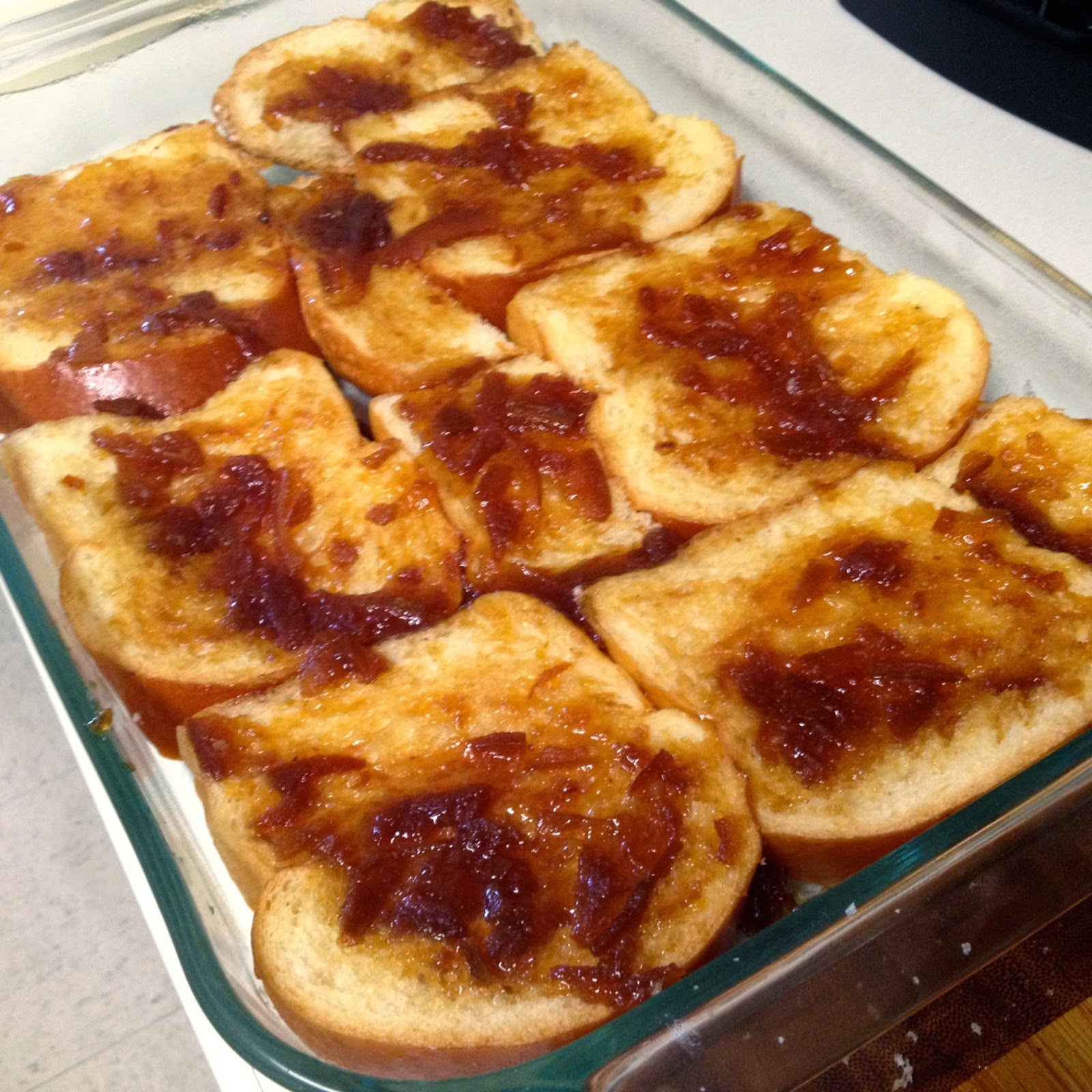 2. Spread marmalade evenly over bread; top with remaining 12 bread slices, buttered side up. 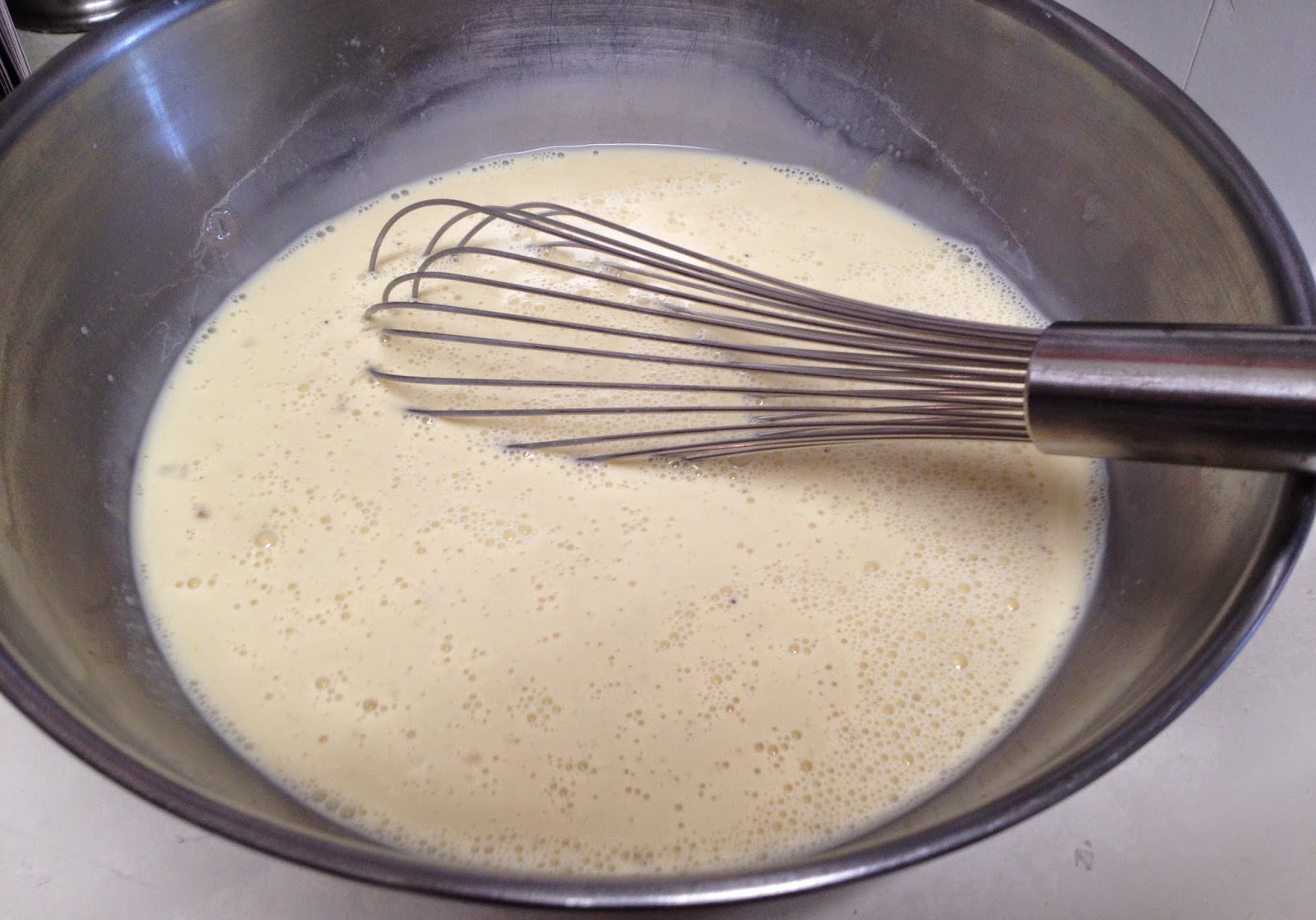 3. Combine milk and next 4 ingredients (through eggs), stirring with a whisk. Pour egg mixture over bread. Cover and refrigerate 8 hours or overnight.
4. Preheat oven to 350°. 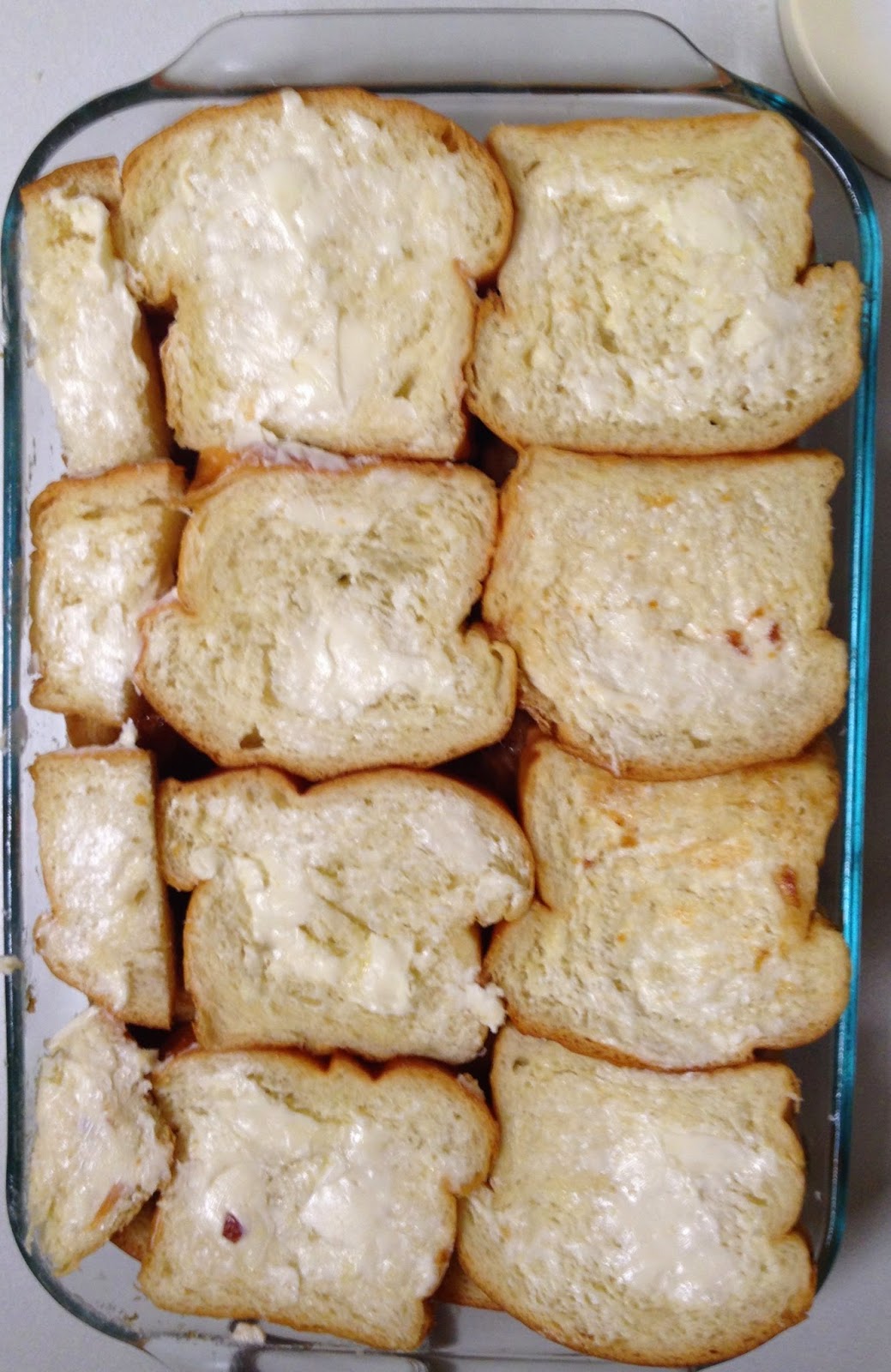