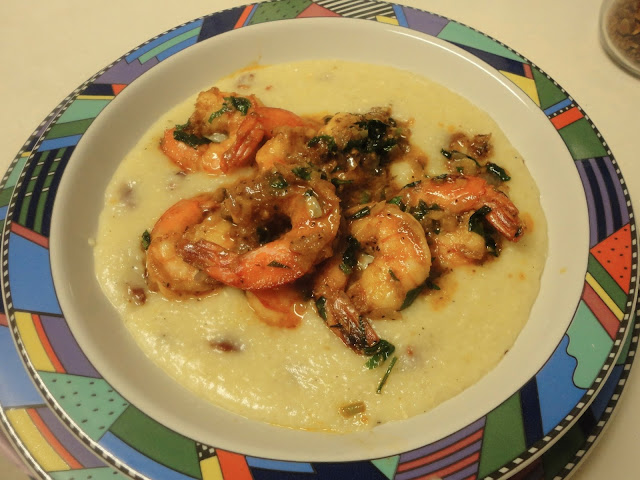 Grits are about as southern as my Aunt Charlotte. She hailed from Huntsville, Alabama and yet never lost a syllable of her Southern accent despite living in Canada for decades.  But for all her southernism, Aunt Charlotte never introduced us to grits. That happy event took place in the Hamptons and only quite recently. I am tempted to say grits were the glue of a New Year’s Day Brunch our friend David gives every year.  But using glue and grits in the same sentence just reinforces an old stereotype: that grits are more akin to wallpaper paste than to anything good to eat.  That is simply not true.  Good grits are smooth and creamy.  Grits are high in iron, extremely low in fat and have no cholesterol at all.  That can’t be said of what grits are flavored with.  Everything from butter to cheese, from bacon to gravy and country ham have found their way into warm bowls of grits.   They not only raise the fat count, these additions do terrific things for the flavor.  Unfortunately, I found this out the hard way:  My first bowl of grits was about as tasty as, well, wallpaper paste.  They were nothing like David’s.  So I set out to see if I could break the taste barrier with my next foray into grits.  And I am pleased to say, today’s recipe broke the bank. Creamy, cheddar-y grits, flecked with bits of crisp bacon were topped with Cajun-spiced Shrimp, shallots and parsley.  As my friend Judith would say they’re like ‘wrapping your mouth around a bite of the south.’
Three quarters of all grits sold in this country are sold in the Southern states from Texas to Virginia. The State of Georgia lays claim to naming Grits ‘the official state prepared food’ in 2002.  But I have to wonder if the Georgia legislature came close to writing a bill pending in South Carolina that declares: “Whereas, throughout its history, the South has relished its grits, making them a symbol of its diet, its customs, its humor, and its hospitality, and whereas, every community in the State of South Carolina used to be the site of a grits mill and every local economy in the State used to be dependent on its product; and whereas, grits has been a part of the life of every South Carolinian of whatever race, background, gender, and income; and whereas, grits could very well play a vital role in the future of not only this State, but also the world, if as Charleston’s The Post and Courierproclaimed in 1952, “An inexpensive, simple, and thoroughly digestible food, [grits] should be made popular throughout the world. Given enough of it, the inhabitants of planet Earth would have nothing to fight about. A man full of [grits] is a man of peace.”  I know both Andrew and I felt full of peace after our dinner. 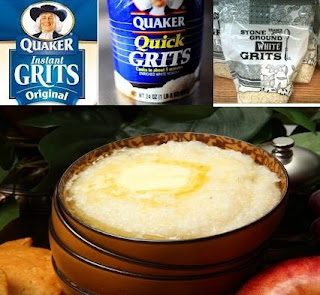 You’ll find three kinds of grits at your supermarket: Instant, Quick and Old Fashioned/Regular/Stone Ground.  No self respecting Southerner would ever use Instant Grits.  These grits are dehydrated and pre-made and their consistency has little or nothing to do with the real thing. As a fledgling grits cook, I can find no real reason for needing an Instant Grit.  The Quick Grits cook in all of five minutes. Quick Grits are quick because they are smaller and ground to a finer grain. The Regular or Old Fashioned Grits take fifteen minutes to cook and they are considered “the real deal”.   Unless you’re like my mother, who could never get out of the kitchen fast enough, stick with the Old-Fashioned Stone Ground or Regular Grits.  They are so easy to cook.  The only thing you must do is you must whisk them thoroughly when you first put them into the boiling hot water the recipe calls for.  This will eliminate any lumps and you’ll have beautiful grits about the consistency of Cream of Wheat.
In the South, Grits are most often a breakfast item. This may explain why my first foray into making them was so bland. I used a traditional recipe for Shrimp and Grits and it failed to break the taste barrier.  But I really wanted to revisit this dish.  I put a couple of things together and I got a flavorful bowl of bacon-infused grits topped with a spicy shrimp mixture that truly held its own.  It wasn’t a breakfast dish, although it would make a great one at brunch, but my goal to make it for supper was a success.  Try this:
Recipe for Cajun Spiced Shrimp over Cheese Grits and Bacon:
Serves 2, can easily be doubled or tripled. Prep Time 15 minutes
Total Time 40 minutes
For the Cheese Grits with Bacon: 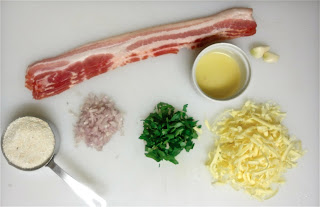 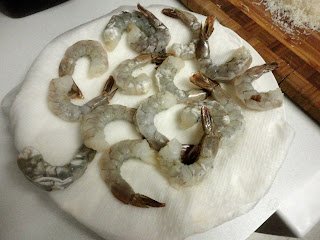 16  21-25 count per pound Shrimp, peeled and deveined (8 shrimp per person).
1 tbsp. Extra Virgin Olive Oil
1 tbsp. Blackened or Cajun Seasoning
Bring water to a boil. Add salt and pepper. Add grits, stirring constantly until there are no lumps. Cook until water is absorbed, about 15 to 20 minutes. Remove from heat. Stir in the butter piece by piece.  Next, stir in the cheese to combine thoroughly with the grits.  Keep warm. 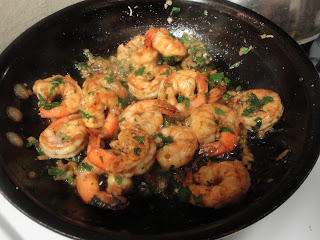 As the grits are cooking, rinse shrimp and pat dry. Fry the bacon in a large skillet until browned about 5 minutes; remove the bacon to a paper towel lined plate. Into the remaining bacon drippings, add  the shrimp and cook until they turn pink, about 5 minutes.  Add lemon juice, parsley, scallions and garlic. Saute for 3 minutes. 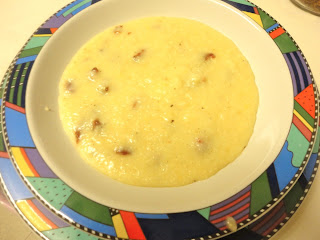 Add bacon bits to the grits and stir*. 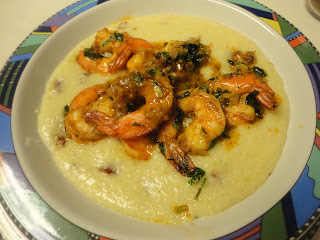 Spoon grits into serving bowls. Top with the shrimp mixture. Serve immediately.
*In our house, there was some discussion about whether the bacon should have been stirred into the grits or tossed into the cooked shrimp mixture.  Take your choice, they both work.
Author: Monte Mathews
Filed Under: Cajun Food, Cajun Spiced Shrimp over Cheese Grits and Bacon, Grits, Seafood Dishes, Shrimp, South Carolina Cooking, Southern Cooking
Crystal Shrimp with Ginger, Sweet Peas and Scallions
Vietnamese Shrimp Sliders adapted from Melissa Clark in The New York Times

2 thoughts on “Cajun Spiced Shrimp over Cheese Grits and Bacon”