Haddock with Fennel-Tomato Sauce And 8 Reasons we should all eat more fish. 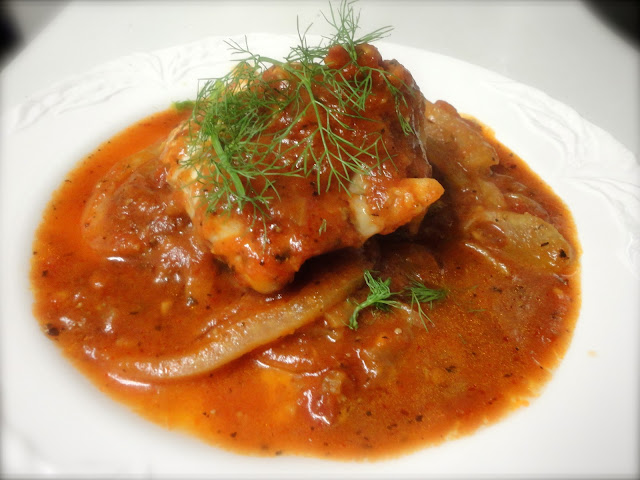 We should all eat more fish.  Further down the page you’ll find a list of eight reasons why. But there seem to be an equal number of reasons people do not.  I was talking to my friend Barbara, an Ohio native, who never ate fish growing up.  They simply weren’t all that available.  Now she strives to eat fish because the health benefits are unavoidable.  But she put her finger on what fish she will and will not eat.  And it all came down to what fish smells like. Because the fact is the freshest fish does not smell fishy.  So if you do the sniff test no matter what fish it is, if it smells the slightest bit fishy, put it back, it’s not fresh fish. Luckily for us, New York is one of the world’s great seaports and great fish arrives daily.

I did grow up eating fish.  Even though Montreal is a thousand mile journey up the St. Lawrence River from the Atlantic, my father, the doctor, insisted on having fish on a weekly basis.  However, one of my least favorite food memories is of something called Finnan Haddie.  This is an old Scottish dish that my fifth generation Grandmother had brought over to Canada.  I wish she had left it at home.  For something so unappetizing, it was very easy to make: Smoked haddock, dredged in flour, is added to butter and warm milk and baked in the oven. Served with mashed potatoes the plate was a blizzard of white, the taste of smoke overwhelmed everything else. It was a dish I vowed never to eat once I’d left home.  Nevertheless, like Barbara, I know we need to eat more fish.  So when I saw this amazingly easy-to-make recipe, I was intrigued.  It called for using Flounder, a fish that’s as bland as can be.  But Flounder was not at my supermarket.  Haddock was.  I did a search and sure enough, Haddock, a firm white fish, is often a substitute for Flounder. I put all memories of Finnan Haddie away and bought the Haddock. The recipe turned out to be as far from Finnan Haddie as you could get: The tomato and fennel sauce was a perfect way to add flavor to the fish.  And, although Andrew initially balked at the Sandra Lee portion of the recipe, the use of jarred Marinara sauce, he tucked right into the dish and pronounced it delicious.  Because the ninth reason we should all eat more fish is that there are few things on earth that you can cook so quickly and that are so good for you when you do.

Eight Reasons Fish should be a part of your diet every week:
1. Fish and shellfish are a great source of protein, vitamins and minerals.
2. All varieties of white fish (including the Haddock in this recipe) are low in fat; 100g of haddock, for instance, contains less than 1g of fat. Lower in fat means lower in calories.
3. White fish, like Haddock, is light and delicate, making it easy to digest.
4. A diet that is rich in Omega 3 fatty acids may help to improve concentration.
5. Omega 3 fats have an anti-inflammatory effect so eating fish may help relieve everything from arthritis to psoriasis.
6. Omega 3 fats may help keep the heart healthy.
7. Oil-rich fish are one of the few foods which contain vitamin D to help the body absorb calcium.
8. During pregnancy, the Omega 3 fats that are found in oil-rich fish are an important factor in the baby’s eye and brain development. 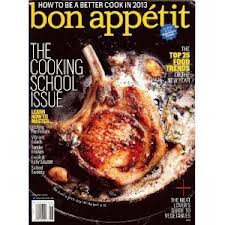 Today’s recipe was adapted from Bon Appetit. It was part of an article entitled  “Fast, Fresh, Easy”.  Each recipe had a “Quick Tip”, a way to cut the cooking times down.  The Quick Tip here was to use store-bought sauce.  In this case, Jarred Marinara “builds big flavor fast”.   For those of use who try to avoid processed foods, this is a challenge.  But if you search through the shelves, you’ll find marinara sauces made with organic ingredients, made without sugar and minimally processed.  Now if you want to avoid jarred sauce altogether, you could simply puree some canned tomatoes and use that as your Marinara.  I used a Jarred Marinara from Trader Joe’s. The trick here is that you doctor the sauce with fennel seeds and sliced fennel.  Since we like a little heat, I also upped the recommended amount of red pepper flakes.  (If you are heat adverse, cut that down to 1/8 tsp.)  The whole thing takes a total of 35 minutes to make, of which only 20 are active.  And if that doesn’t sell you on this dish, consider the calorie count: 190 calories a serving with 5 Fat grams and 2 grams of fiber.  Here’s the recipe:
Recipe for Haddock Poached in Fennel-Tomato Sauce adapted from Bon Appetit  Serves 4
3/4 teaspoon fennel seeds
1 teaspoon crushed red pepper flakes
1 tablespoon olive oil
1 small fennel bulb, thinly sliced, plus fennel fronds for garnish
Kosher salt, freshly ground pepper
1 1/2 cups store-bought marinara sauce, preferably with no sugar    added
4 4-ounce pieces skinless flounder fillet
Coarsely chopped fresh tarragon
Special equipment: A spice mill (optional)
Coarsely grind fennel seeds and red pepper flakes in a spice mill or with a mortar and pestle. Alternatively, place in a resealable freezer bag. Crush with a rolling pin or large skillet. Set aside. 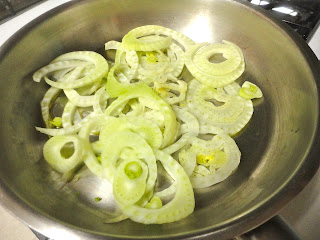 Heat oil in a large skillet over medium-low heat. Add sliced fennel, season with salt and pepper, and cook, stirring often, until soft, 10-12 minutes. Add spices and cook, stirring often, until spices are beginning to darken, about 1 minute.
Add marinara sauce and 1/2 cup water to skillet; bring to a simmer and cook to meld flavors, about 5 minutes. Season with salt and pepper. 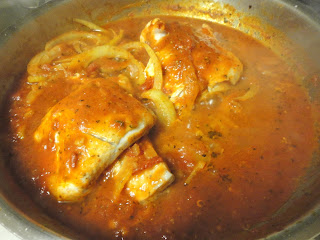 Season fish with salt and pepper and fold fillets in thirds or in half to form packets. Place fillets in sauce. Cover skillet and reduce heat to medium-low. Cook until fish is opaque and beginning to flake, 12-15 minutes. 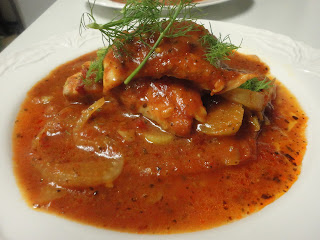 6 thoughts on “Haddock with Fennel-Tomato Sauce And 8 Reasons we should all eat more fish.”