The Sloppy Joe is hardly anyone’s idea of gourmet food. This may lie in the fact that making one requires virtually no culinary skills of any kind.  The original Sloppy Joe recipe calls for ground beef and celery to be cooked up with a ketchup sauce and then served on squishy white bun.  There may be dozens of secret family recipes for this classic but none stray too far from this basic formula.  And if, by any chance, it still sounds like there’s any degree of difficulty in making one, there are plenty of commercial products to turn to.  You can just open a can and you’re pretty well done.  Now if you are slightly turned off by the name “Sloppy Joe” which I confess I was, it’s precursor had an even worse moniker.  In Iowa, which lays claim to the invention of the Sloppy Joe, it was called a ‘loose-meat’ sandwich.  That was until the owners of a restaurant in Sioux City, famous for its loose-meat sandwiches, renamed it the Sloppy Joe in honor of their chef, a man named Joe.  It wasn’t really until the 60s that the name took hold. But it certainly never took hold in our house and quite honestly, I may never eaten one until I came across a recipe in this month’s Food and Wine Magazine.  Apparently, the Sloppy Joe is officially part of one of the great food trends of 2013.  Really!

The trend is actually The Gastropub or, as Food and Wine calls it, The Gastropub 2.0.  I am sure that this comes as a huge surprise to US Owners of Gastropubs from Los Angeles to Atlanta to Chicago to New York as the rise of the Gastropub was noted by USA Today in 2007.  However, Food and Wine goes on to acknowledge that “a few years ago, chefs were turning everything into small plates.  Now they’re transforming pub food in much the same way”.  In the case of this recipe, you not only have to transform the food, you also have to transform your idea of what as Asian restaurant turned into a pub would be like.  That is apparently exactly what Chef Ming Tsai is planning on doing when he opens his Boston spot, Blue Dragon, which has been dubbed an Asian Gastropub.

Despite his name, Ming Tsai is American as apple pie.  Born in California, he was raised in Dayton, Ohio.  His father, Stephen, did the most logical thing for someone with a doctorate in Mechanical Engineering from Yale.  He and his wife opened a restaurant in Dayton called “Mandarin Kitchen”.  This is where Ming Tsai had his introduction to restaurant cooking.  And then Ming took the family path to a career in food:  After graduating from Phillips  Andover Academy, he went on to Yale where he too got a degree in Mechanical Engineering.   After that, he did in fact get his Master’s Degree in Hotel Administration and Hospitality Marketing.  And, armed with those degrees, he and his wife, Polly Talbott, opened their first restaurant, Blue Ginger, in Wellesley MA in 1998.  Ming is also the author of 3 cookbooks. You may remember Chef Tsai from The Next Iron Chef where he finished fifth in their Las Vegas finals. 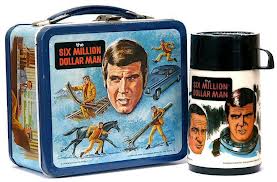 Meanwhile, back at the yet-to-open Blue Dragon, Chef Tsai plans to serve his Asian-accented Sloppy Joe sliders.  They are based on a recipe his mother made for him for his school lunches.  She would pack a thermos of this chili-sauced and ginger-flavored ground meat in a thermos and tuck the buns into his lunch box.  They were so popular with his classmates that he often traded a little slider for a full lunch. Once you’ve tasted what is a very grown-up sloppy Joe, with a hint of fire and tons of flavor,  I am sure they’ll be on your must-make list again and again.  Or you can wait for Blue Dragon to open.  There, Chef Tsai says he’ll sell them for a dollar a piece.  I’d get there early.  At that price, they won’t last. Here’s the recipe:

Recipe for Ming Tsai’s Asian Sloppy Joe Sliders
This recipe make 20 sliders if you use a dinner roll for the bun.
However, if you choose the smaller brioche buns, you would get
considerably more. I’d say they’d make a great hors d’oeuvre were they not so….sloppy.  Food and Wine recommends pairing them with an artisanal beer.  I halved the recipe and we ate them as a little gastropub supper with a green salad and a little red wine. 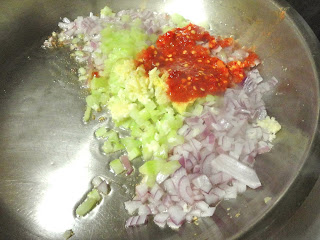 In a large, deep skillet, heat the canola oil until shimmering. Add the onions, celery, sambal oelek, garlic, ginger and a generous pinch each of salt and pepper and cook over moderate heat, stirring occasionally, until the vegetables are softened, about 8 minutes. 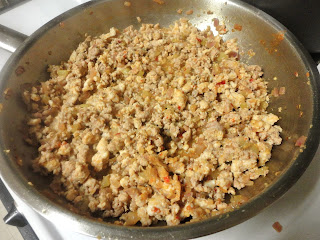 Add the ground chicken and pork and cook, stirring occasionally to break up the meat, until no pink remains, about 5 minutes. 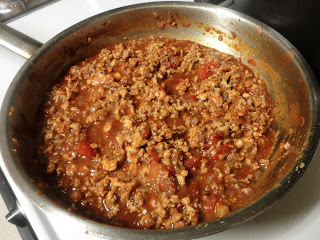 Stir in the hoisin, tomatoes and lime juice and bring to a boil. Simmer over moderately low heat, stirring occasionally, until thickened, about 20 minutes. Season with salt and pepper. 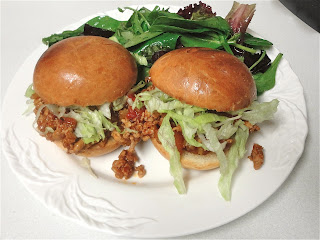