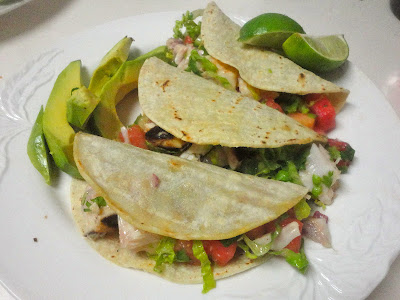 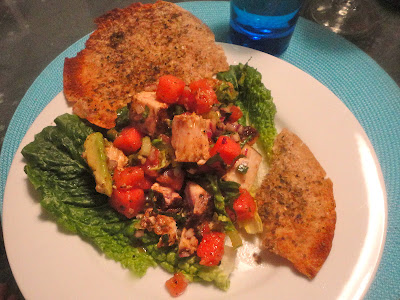 For the last few summers, one of our salads of choice has been the Watermelon and Tomato rendition first published here in July 2010: https://chewingthefat.us.com/2010/07/watermelon-and-tomato-salad.html.  Nothing says ‘cool off’ like watermelon and this salad combines the sweetness of the fruit with the tang of ripe tomatoes, a jolt of red onion and a splash of red wine vinegar.  It’s a perfect accompaniment to almost anything grilled, truly a dish that has summer written all over it.  So when I spotted a recipe for Fish Tacos with Watermelon Salsa, I couldn’t wait to try it. 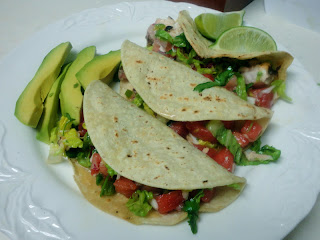 I love a good fish taco and this recipe gives you a filling that is ideal for a hot weather meal.  It’s also one of those things that you can feel holier-than-thou about because it’s just so healthy—the fish, the fruits, the avocado—and it’s a meal in itself that weighs in at just 437 calories per serving.  That’s three tacos.  If it has any drawbacks at all, it’s kind of messy.  The filling spills out of the tacos and you should hold them over the plate or you could end up with a lapful.  That’s when Andrew weighed in and suggested that the dish would make a wonderful salad without the taco at all.  For those of you still zealously counting carbs, that would cut out 45 grams right away.  So I set out to adapt it with one of our all-time favorite fish, swordfish. 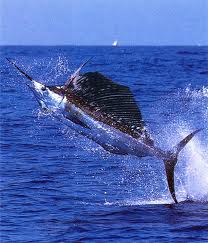 This dense Atlantic fish is caught right off Long Island.  Several years ago, Atlantic Swordfish was reported as threatened.  But after just a few years in quota management, Swordfish is thriving, replenishing its species stocks to a sustainable level. So as long as Fisherman are kept to the current limit of harvest, and the species reproduces quickly enough so that their numbers will not deplete, you can eat swordfish with impunity.  That is with one major caveat.  Because of its size, swordfish contain more mercury than smaller fish. So women who are pregnant or want to get pregnant should avoid the fish.  Small children similarly should not eat it more than once a month.  But the most interesting news is that food scientists now believe that the mercury in fish is distinctive from the poisonous mercury which with we’ve lumped it together.  Stay tuned. 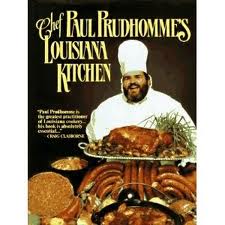 One of my all-time favorite ways of cooking swordfish is to blacken it with a coating of seasonings combined just for that purpose. Since the fish in the fish tacos were seasoned with chipotle chili powder, it was no stretch to imagine the blackened swordfish adding mightily to the flavor of our salad.  The master of blackening is unquestionably Paul Prudhomme, the Louisiana native who first brought Cajun cooking to our attention in the early 80s.  His “Paul Prudhomme’s Louisiana Kitchen” (Morrow 1984) was a revelation in the flavors of the Gult of Mexico and the whole Cajun and Creole cooking of Southern Louisiana.  So before you even start making the salad, you can use his recipe for Blackening.  You may want to double or triple these quantities because the mixture will keep forever and I am fairly sure you will want to cook both this dish and blackened swordfish again. Or you can, without any question, buy Chef Prudhomme’s (or any number of his competitors’ ) recipe in the supermarket spice aisle.  Here’s the recipe for making your own:
Recipe for Paul Prudhomme’s Seasoning Mix for Blackening:
1 tbsp. sweet paprika
2 1⁄2 tsp. salt
1 tsp. onion powder
1 tsp. garlic powder
1 tsp. cayenne
3⁄4 tsp. freshly ground black pepper
3⁄4 tsp. freshly ground white pepper
1⁄2 tsp. dried thyme
1⁄2 tsp. dried oregano
12 oz. butter, melted
6  1⁄2″-thick 8-oz. skinless, boneless red drum, black
drum, or red snapper filets
1. Combine paprika, salt, onion and garlic powders, cayenne, black and white pepper, thyme, and oregano in a small bowl and set aside.
Now you’re ready to start cooking.  The only difference between the recipe as a Taco filling and the recipe as a main course salad is in the selection of fish and their preparation.  Everything else remains the same. Of course in the Salad recipe you switch out the taco for a bed of fresh lettuce.
Here’s the recipe:
For the Salsa: 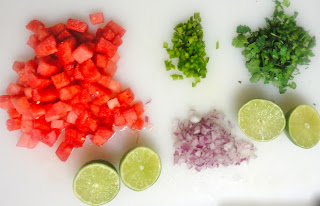 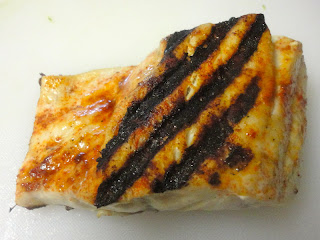 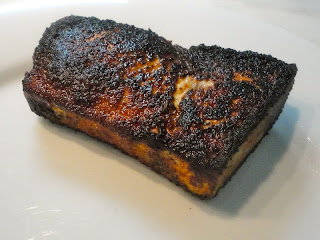 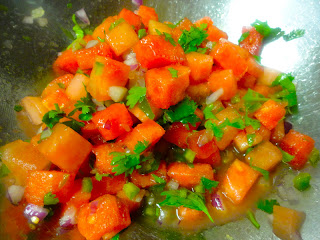 Combine the watermelon, red onion, cilantro, lime juice and jalapeno in a bowl. Toss with 1 tablespoon olive oil and 1/2 teaspoon salt and set aside.
To make the Fish Tacos:
Preheat a grill or grill pan to high. Sprinkle the fish on both sides with the chile powder and 1/2 teaspoon salt; drizzle both sides with the remaining 2 teaspoons olive oil. Brush the grill with olive oil, then add the fish and grill until marked and cooked through, 4 to 5 minutes per side. Transfer the fish to a plate and break into bite-size pieces.
Meanwhile, toss the lettuce with 2 tablespoons of the juices from the        watermelon salsa and a pinch of salt. Warm the tortillas on the grill and fill with the fish, watermelon salsa, avocado and lettuce. Serve with lime wedges.
To make the Swordfish Salad:
Heat a large cast-iron skillet over very high heat until it is beyond the smoking stage at least ten minutes.  (The skillet cannot be too hot for this dish)
While the pan is heating, melt the butter.  Put the seasoning mix on a plate to cover.  Dip the swordfish in the butter so that both sides are well coated.  Then generously coat the fish with the seasoning mixture. Place the fish in the hot skillet and cook, uncovered until the underside looks charred, about 3-4 minutes depending on thickness of    the swordfish and the heat of the skillet. Turn the fish over, cook another two minutes.  Check for doneness by cutting into the fish.  It should be cooked through.
Set aside the fish and when cooled, cut it into 1 inch squares and toss with the watermelon salsa.  Plate the salad atop lettuce leaves.  I served this with toasted herbed pita bread.  Serves 4.
Author: Monte Mathews
Filed Under: Blackened Swordfish, Cajun Food, Dinner Salads, Fish, Fish Tacos, One Dish Dinners, Paul Prudhomme's Blackened Fish, Summer Dishes, Watermelon Salsa
Neal Hartman’s Baked Butter Beans
Blackberry and Lime Italian Meringue Pie from Bon Appetit