Soup Making two ways….in a Rival crockpot and In the Cuisinart Blend and Cook Soupmaker and a recipe for really good tomato soup.

The weather this winter has yet to cooperate. It has been so consistently mild that the warming pleasures of a bowl of homemade soup have almost seemed out of place.  Not that I don’t appreciate not having to dress like Nanook of the North every time I head outdoors. I would just welcome a couple of opportunities to have a big pot of soup on the back of the stove, warming the house and anyone who comes in from the cold.  And this year, thanks to the Christmas generosity of our friends, Michael and Jim, we even have a new toy to make soup with, the Cuisinart Blend and Cook Soupmaker.  Come to think of it, the Rival Crockpot also came our way through these dear friends.
I’ll start with the Crockpot.  I know there’s a woman on TV who claims to use hers to prepare dinner for her 8 children. But mine seldom gets a work out.  And while anyone who has 8 children must know a thing or two about the splendors of the slow cooker, I have a beef with the appliance.  And here it is:  If the virtue of the Crockpot is that you can put all the ingredients into the pot in the morning, walk away and come back 8 hours later to a family dinner, someone has to explain why I must brown anything before I put it into the pot. Doesn’t this mean that at breakfast time I am standing over the stove browning tonight’s dinner?  I marvel at how the woman with 8 children does that and gets them fed and off to school.  But I am not about to brown anything that goes into the Crockpot. 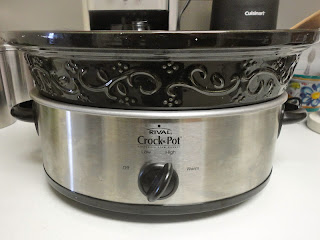 Lo and behold, when I was poking around for a recipe for Slow Cooker Onion Soup, I came upon a recipe that claimed you could caramelize the onions in your crockpot.  Eureka!  I am huge fan of onion soup.  I love it with its rich beefy stock and deep onion flavor to say nothing of the slab of French Bread and the Gruyere cheese melting down the sides of the lion-headed bowls that we use solely for that purpose.  I couldn’t wait to get started.

But my soup never really did get started. I doubled the time it was supposed to take ‘caramelizing’ the onions.  What a joke. They never achieved anything close to caramel color.  But I went ahead with the next step and added the flour to give the soup body.  Then I added the beef stock and waited.  Hours went by.  I’d check on the soup periodically only to find it pathetically wanting in flavor or any kind. I’d toss in a little more salt.  Still nothing. Finally at the end of 8 hours I had something that looked vaguely like dishwater and tasted of nothing. I should have read the comments section of the recipe page where one and all said the same thing:  It was a far better recipe if you caramelized your onions on the stove first. Well, we’re back to the smell of onions mixing with the morning coffee.  I turned the machine off.

But I am of the waste-not-want-not school and so I was determined to make something out of my soup.  The next day, I went through the refrigerator with its cache of leftovers.  First in went the ribs from a standing Rib Roast.  Then some cannellini beans, most of the contents of a can of tomato sauce, and some leftover carrots. Gradually, the soup had some flavor.  I fished the bones out and broke up the beef with a fork.  I cooked the soup all day and into the night, only turning the thing off before going to bed.  The next day, I had a decent bowl of soup.  Topped off with a dollop of Sour Cream, it made a warming lunch.  Verdict:  If you want to resurrect the soup pot on the back of the stove, filled exactly as it was years ago with everything and anything, you can actually have a decent bowl of soup without the slightest bit of browning.   But it will take a very long time to get there. 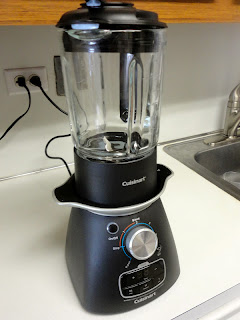 Far more successful was the soup I made in the new Cuisinart Blend and Cook Soupmaker.  Now this devise, which looks like a commercial blender, is intimidating at first.  Just its size is impressive. It rises off the counter to a height of 18 inches. My first thought was will this be like the toaster oven?  The appliance that has so many features, it does none of them very well?  Turns out, that’s not the case here. It has a heating element built into its base.  Its control panel has a built-in timer and its very sharp blades have a ‘Stir” button which, rather than pureeing the contents of the bowl, actually do just stir them up.  You simply put whatever ingredients your recipe calls for into the blender jar heat them on high for a few minutes, then lower the heat, cook for about 30 minutes, then puree.  I made my second all-time favorite soup, Tomato, and it was delicious.  What you may love about this recipe is that its fat-free.  And as much of a cream soup fan as I am, you do not feel anything is missing in this creamy, all vegetable version.  The recipe follows.  But my last word on the subject is: If you want really great onion soup, you will not find it in the crockpot.  And I note that in the recipe booklet that came with the Cuisinart, there’s no recipe for onion soup.  Smart people those people at Cuisinart.  Here’s the recipe:

Tomato Soup made in the Cuisinart Blend and Cook Soup Maker adapted from a Cuisinart recipe:
For 5 cups of Soup: 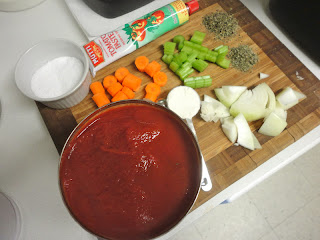 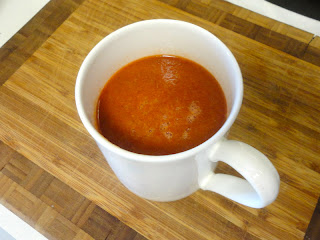 1.   Put all of the ingredients into the blender jar. Cover and stir to mix.
2.   Set timer for 9 minutes and temperature on High. Once the mixture comes to a boil, set timer for 30 minutes and temperature on Medium.
3.   When 30 minutes is up, blend on speed 1, gradually raising to speed 3, for two minutes or until completely smooth.
4.   Taste and adjust for seasoning as desired. Serve.
Author: Monte Mathews
Filed Under: Cuisinart Blend and Cook Soupmaker recipes, Rival Crockpot, Slow Cooker Recipes, Slow Cookers, Soup Making, Tomato Soup
Slow Cooker Pulled Pork and the Best Coleslaw Recipe Ever!

2 thoughts on “Soup Making two ways….in a Rival crockpot and In the Cuisinart Blend and Cook Soupmaker and a recipe for really good tomato soup.”