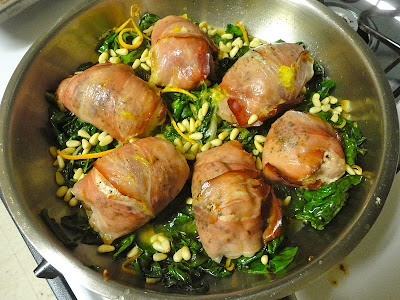 I have significant lapses in my culinary adventures.  Before I made this perfect weeknight dinner with its amazing range of delicious tastes and textures, I had never cooked Chard.  I will not go so far as to say I had never eaten  Chard but it certainly has never been something I actively sought out of any menu I can remember. I imagined a bitter taste, something akin to some truly unpleasant experiences I have had with collard greens.  But in the spirit of locovore eating, nothing makes more sense in January than eating this very hardy vegetable. You can find freshly cut at Winter Farmer’s Markets. Mine, I confess, came straight from California via Fairway Market.  Hardly local but certified organic. 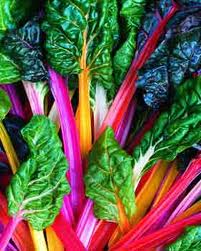 Swiss Chard is a complete misnomer.  Chard’s earliest varieties originated in Sicily.  The ‘Swiss” moniker was given to distinguish chard from French spinach varieties by seed catalogs in the 19th Century.   All Chard has varying shades of deep green leaves. The stalks are what determined the actual variety—with beautiful and very colorful stems in red, orange, yellow and white.  What I bought was called “Rainbow Chard”, which is not a variety at all but an allusion to the fact that several varieties are sold together.   I’ve read that fresh young chard can be tossed into salads.  But at this point in the season, it made sense to sauté it as you would spinach, with a little oil and garlic.  To absolutely guarantee that there’s no bitterness, this recipe incorporates orange juice.  It was absolutely delicious. And it’s one of those foods that you can eat sanctimoniously.  Chard’s nutritional profile is hard to beat. High in vitamins A, K and C, with a 6 oz. serving containing 214{4e4771bbe073b579fdd8e596ee487f65145483febbc8ba0a80525f62b26cad86}, 716{4e4771bbe073b579fdd8e596ee487f65145483febbc8ba0a80525f62b26cad86}, and 53{4e4771bbe073b579fdd8e596ee487f65145483febbc8ba0a80525f62b26cad86}, respectively, of the recommended daily value of those vitamins. It is also rich in minerals, dietary fiber and protein. Couple those virtues with skinless Chicken thighs, thin slices of prosciutto, a tablespoon of olive oil, orange juice and zest and a sprinkle of pine nuts and you’ll feel sanctimonious about the whole dish. 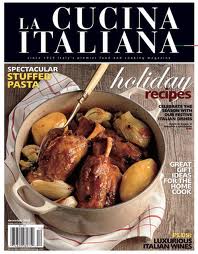 I adapted this recipe from La Cucina Italiana magazine.  If there’s one food magazine that isn’t on your list and should be, this is it.  Its recipes are easy to follow and they live up to the great truth of Italian cooking: great ingredients, simply prepared give you flavors that are bright and satisfying.  In this case I had to marvel at the combination—the saltiness of the prosciutto, the tenderness of the chicken, the sweetness of the orange, the texture and taste of the chard—all married in something so satisfying that Andrew was completely content eating a very small portion to atone for his Christmas cookie binge.  Not that I was paying too much attention to diet, but the major adaptation I made to the recipe was switching out La Cucina’s pancetta for the much lower fat content of the prosciutto. Now I undoubtedly could have gone even lower if I’d used chicken breasts but to me, there’s no comparison in the depth of flavor of the thighs compared to the breasts.  And if you need any further justification for using them, thighs are far less likely to overcook. Other than the prosciutto-pancetta switch up,  it’s pretty much exactly what the magazine published in June 2008.  Here is the recipe: 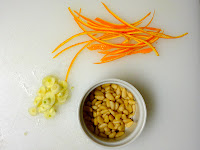 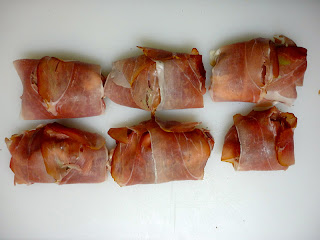 Heat oven to 400°. Season chicken with pepper and wrap with prosciutto . Place in a baking dish. Bake until browned, about 20 minutes. While chicken is baking, cut a 1-inch wide strip of peel from the orange, avoiding the pith, and thinly slice. Set sliced peel aside.Squeeze juice from orange. 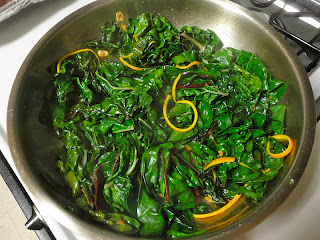 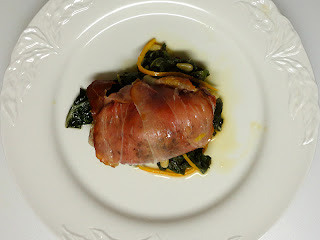 10 thoughts on “Chicken with Prosciutto, Chard and Pine Nuts”