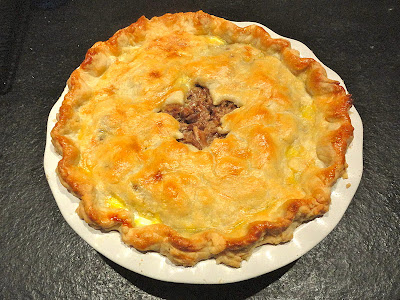 In French Canada, Tourtiere, a wonderfully rich pork pie,  occupies a place of honor that’s likely unmatched by any other dish.  It is served ubiquitously on Christmas Eve. This holiday party even has its own name: “Reveillon“.  In French the word means ‘awakening’. This midnight gathering is a feast of indulgent food and song.  In many families, a Christmas Eve nap is a must to prepare for the long night ahead. Then, after midnight mass, family and friends return home to a rich buffet of comfort food all laid out to welcome the cold and weary worshipers.  Helped along by a steady flow of mulled wine of cider, the end of the meal is often the point where everyone breaks into song singing Christmas Carols.   The other event that is often an occasion for a Reveillon is of course, New Year’s Eve itself.
Since our trip to Montreal last Fall, I’ve had a Reveillon of my own.  My interest in all things Quebecois has been awakened.  So I wanted to bring a traditional French Canadian Tourtiere to our table over the holidays.  Now a traditional Tourtiere is a pork pie consisting of both ground meat and pulled pork, its seasoning a unique blend of cinnamon and ground cloves.  But tourtiere is a very expansive recipe and the Quebecois make all manner of fillings depending on where they live (think seafood tourtiere) and what they have on hand (think wild game tourtiere).  Interestingly, the word ‘tourte’ means ‘passenger pigeon’ in French and folklorists believe that the earliest French Canadians first made pigeon pies. When the passenger pigeon was hunted out of existence, they turned to pork.  Because basically pork is the king of meats in Quebec.
In searching around for a recipe for the Tourtiere I remember, what better chef to go to than Martin Picard, a legendary culinary king who is the Godfather to so many of the chefs whose restaurants we loved in Montreal.  Chuck Hughes, Frederic Morin, David McMillan and a host of other prominent chefs all owe a debt of gratitude to Chef Picard.  He has elevated the cooking of Quebec and made it such a subject of interest in the culinary world that Anthony Bourdain did an entire episode of his TV program “No Reservations” about the chef and his landmark Montreal Restaurant “Au Pied de Cochon”.  Translated from the French, that’s “At the Foot of the Pig”. Where better then to find a recipe for the pork pie that is the stuff of such vivid memories?
It turns out that there is a veritable avalanche being written about Quebec cuisine.  “The Art of Living according to Joe Beef”, this year’s smash hit cookbook from Chefs Morin and McMillan, resulted in a wonderful article in October’s Food and Wine and, not to be outdone, Bon Appetit’s January 2012 features a visit with Martin Picard and a recipe for Tourtiere de Shack!  The recipe is a reference to Chef Picard’s ‘Cabane a Sucre d’Erables’, a Quebec institution which in Spring produces the province’s famous Maple Syrup.  With apologies to Vermont, nothing compares with Quebec Maple Syrup and hundreds of “Cabanes” are an absolute must visit each year.
I set out to make a “Tourtiere de Shack”.  But I must tell you, it was not what I remembered at all.  Dry, it lacked flavor and the pastry, made with a traditional dough that consists of flour, lard and a little salt, left Andrew and I cold.  I was as disappointed as I was determined.  Turning to “The Album Au Pied de Cochon”, one of our Montreal souvenirs and Chef Picard’s 2006 Cookbook, I was thrilled to see a recipe for “Tourtiere de Ville”.
Perhaps, because I was a city kid, this was what I remembered.  And by god, it was!  The pastry crust was buttery, the filling rich and juicy, the spice blend exactly as I remembered it and the end result a melt-in-your-mouth delicious dish.  This is hearty peasant food.  It is not at all difficult to make and to make it even more appealing, it is very inexpensive to make.  It does take a little time but very little effort. The pastry needs to chill and the pork to braise.  But that’s about it.
As to my adaptations, they were relatively few.  I did not buy ground pork.  Instead, I bought very inexpensive pork chops with plenty of fat and ground them in the Cuisinart.  In place of the pork shank and pig’s knuckle in the original recipe, I opted for a very simple braise of country-style ribs which I then shredded to add to the ground pork.  I also added the braising liquid to the pork mixture.  It worked beautifully.  And Andrew, who after my first sad attempt at Tourtiere was flummoxed as to why I would ever want to cook the dish again, finally understood what a great treat this dish is on a cold winter’s night.  Here is the recipe:
Tourtiere de Ville adapted from Martin Picard of Au Pied de Cochon in Montreal QC
For the Pie Dough:
8 oz. cold unsalted butter
1 2/3 cups all-purpose flour
1/3 cup cold water
1 pinch fine salt
For the Tourtiere:
1 recipe pie dough
Approx. 1 1/2 lb. freshly ground pork
1 1/2 lb pork shoulder or country style ribs (braised)
2 cups Chicken Stock or Broth
1 medium onion (thinly sliced)
3 cloves garlic (chopped)
10 oz. champignons de Paris or button mushrooms (chopped)
½ cup white wine
1 egg yolk
A knob of butter
1 small potato (grated)
1 heaping tsp. ground cloves
½ tsp. ground cinnamon
Salt and freshly ground pepper 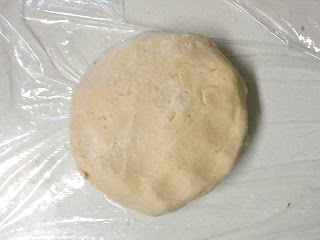 First, make the pie dough.
Cut the butter into ½ inch cubes. Put the flour and salt into the food processor.  With metal blade in place, drop the butter cubes, one by one into feed tube.
Note: Some small pieces of butter, about 3 mm (1/8 in), should remain in the flour mixture. They will help the pastry cook to perfection.
Add water and form a dough roll without working the pastry too much. Leave to rest in the refrigerator at least 2 hours.
Now make the Tourtiere:
Preheat oven to 375 degrees
Put the pork meat for braising into a Dutch oven with a tight lid.
Cover the meat with the Chicken Stock.  Braise for two hours.
Remove from oven. Drain and reserve the braising liquid. When pork is cool enough to handle, shred it and set aside. 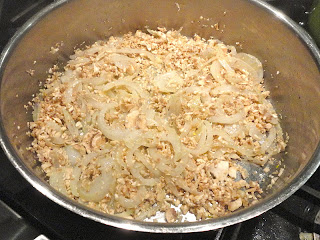 Meanwhile, in a large pot, sweat the onions and garlic in butter. Add the mushrooms and continue cooking until the water given off by the vegetables evaporates completely. Add the white wine, letting it reduce completely. 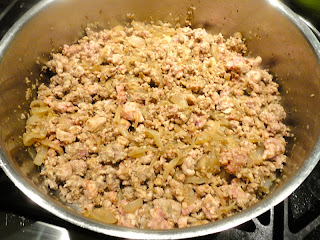 Add the ground pork and spices to the pot. Cook for 10 minutes, stirring it to separate the chunks of meat. Add the grated potato. Cook for approximately 10 more minutes.
Correct seasoning and leave to cool. 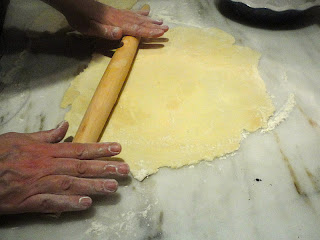 Roll out the pie dough and line a pie plate with half of it. Fill with the mixture of ground meat and put the shredded pork on top. 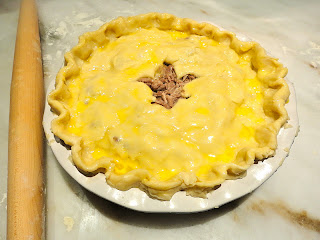 Cover with the top half of the pie crust. Brush with the egg yolk. Poke a few holes in the top crust to allow the steam to escape during cooking. 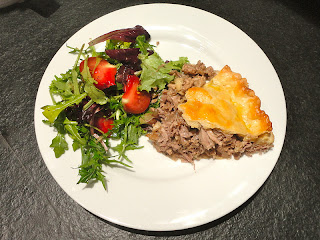