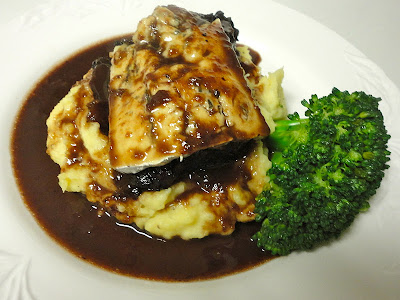 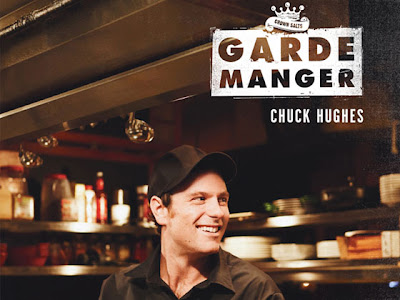 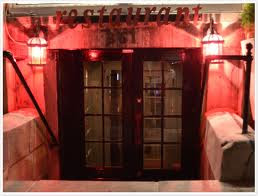 Andrew and I felt as if we already knew Chuck Hughes before we even arrived at his latest Montreal venue, “Le Bremner”  (361 Rue St. Paul East, Montreal H2Y 1H2 Tel: 514-544-0466 ) in the heart of Old Montreal.  We’d been following Chuck for months on his Cooking Channel Show “Chuck’s Day Off”.  The premise, if you haven’t had the pleasure, is that Chuck, a extremely affable (and extremely attractive) chef invites all manner of people he knows to eat a lunch he’s prepared specifically for them at his other Montreal hot spot, “Le Garde Manger” (408 Rue St. Francois Xavier, Tel:514-687-5044).  We get to watch the cooking. His guests ranging from his fellow amateur Hockey team players to the local firemen to the guy who delivers the linen to the restaurant get to do the eating.  It’s great television cooking because Chuck exudes energy and passion and infuses his cooking with ‘lick the screen’ dishes you salivate over just watching.  To say that Andrew and I both had mancrushes on Chuck would likely be an understatement.  And meeting him up close and personal just sealed the deal.
His new venture is a few blocks away from “Garde Manger”. “Le Bremner” just opened this summer.  But from the décor to the smooth and incredibly welcoming service, you’d never know it.  It feels like it’s been there for years.  Situated in a basement space directly across from Bonsecours Market, Montreal’s city hall built in 1843 and now a popular tourist draw with shops and galleries, Le Bremner’s only signage simply reads “Restaurant” in red.  The surprisingly small space has table service for 35, another 25 seats on the outdoor patio and 10 at the bar.  We took our seats there and the evening took off.
The mainly seafood menu is made up of plates meant for sharing.  They are all the same size so there’s no differentiation between appetizers (or entrees as we say in Montreal) and main dishes.  Instead the menu is split into Chilled Items (for example Andrew’s order of Tuna Tartare ), From Outside (my Nova Scotia oysters with three mignonettes), Bread & Cheese (Bacon cheddar focaccia with scallions), From the Stovetop (our fantastic Shrimp with Pork Belly), From the Broiler (ex. spicy bass with edamame), Vegetables (Broccolini with anchovies and chopped eggs) and Dessert (very homespun and killer good like our Chocolate Tart with Raspberries and mint.)  The bartender, J.K, produces the restaurant’s home made sodas. The wine list is as original as the menu with a great selection of wines by the glass. The Chenin Blanc I had was extraordinary.  We loved eating at the bar and the food was simply out of this world.  Then came our moment.  Chuck, whom we had seen most of the evening through the open kitchen door, came out to greet us.  Andrew said to him: “We’ve eaten around the world and your flavors are completely original and absolutely delicious”.  Truer words were never spoken.  He was his totally charming self and quite honestly, it was one of the highlights of our entire trip. 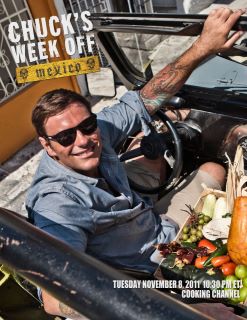 If you’d like to know get to know Chuck, I’m afraid you’ll have to watch reruns of this season’s  “The Next Iron Chef” this season on the Food Network. Chuck hung in there for several rounds but lost last night! But he already won Iron Chef, the first Canadian to do so and against…Iron Chef Bobby Flay.  And if you get the Cooking Channel, you can also see Chuck’s new series, “Chuck’s Week Off” during which he travels and cooks.  Repeats of “Chuck’s Day Off” continue but the series pretty ran its course when it “ran out” of people to cook for.  We half expected to see the Tile Grouter in a segment. 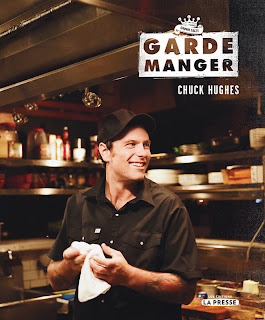 After our dinner at Le Bremner, we went to Librairie Renaud-Bray, a big French language bookstore on Rue St. Denis and of course, I had to buy Chuck’s first cookbook “Garde Manger” (Les Editions La Presse (2010).  The book is completely in French. Despite his name and his complete fluency in English, Chuck identifies as French Canadian because his mother and his stepfather who raised him, are full-on French Canadian.  His father, Chuck Hughes Sr., died when Chuck was 5.  Of course, the Garde Manger book doesn’t have recipes for anything at the Bremner, which would have been a mild disappointment if it weren’t packed with recipes familiar from “Chuck’s Day Off”.  One of the most famous of these is his recipe for Short Ribs with Cambazola or “Bouts de Cotes de Boeuf au Cambazola”.  The recipe appears in the chapter of the book called “C’est Malade!” which directly translates to “That’s Sick!”.  This may require the following explanation so here’s what I translated directly from his pages:
“C’est Malade!” The four rules of cooking according to Chuck:
Close your cookbooks!
Express yourself!
Have fun!
Let the food express itself!
“That’s sick!” It’s Chuck’s preferred expression that he says
spontaneously once he’s satisfied with a culinary creation.
Lobster Poutine? That’s Sick! And it’s so good!
A jerk sauce with Crab? Too good!
In cooking, there aren’t strict rules, only the results count.
Everything can be a source of inspiration.
At Garde Manger, that’s understood.” 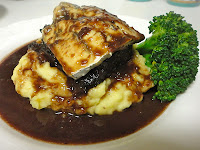 This recipe for Short Ribs with its incredibly delicious sauce, its magnificent addition of Cambazola, a cow’s milk and sheep milk blue cheese, and its pillow or perfectly mashed potatoes is a perfect example of Chuck’s philosophy.  If you can’t find Cambazola, substitute slices of Riopelle or Camembert Cheese.  Remember, “let the food express itself” and you’ll end up with something you can say: “C’est Malade!”  Here it is:
Recipe for Short Ribs with Cambazola or Bouts de Cotes de Boeuf Au Cambozola  Serves 4. 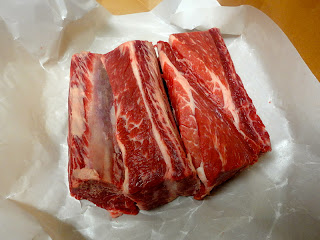 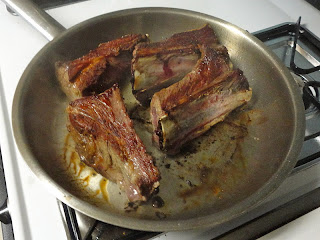 Season the sort ribs all over with salt and pepper. In a heavy sauté pan, brown the beef on all sides until they are golden brown.  Remove the short ribs to a plate. Set aside. Add all the vegetables to the sauté pan and cook them several minutes until they are softened and caramelized. Add the herbs, the brown sugar and the wine to the pan and with a wooden spoon, scrape the brown bits from the bottom of the pan. Bring to a boil then transfer vegetable mixture to a large Dutch Oven.

Add the short ribs to the Dutch Oven and put the dish into the pre-heated oven for 4 hours or until the meat is very tender and falls apart when prodded with a fork.
Remove the cooked short ribs and put them, covered, in a warm oven.
6. 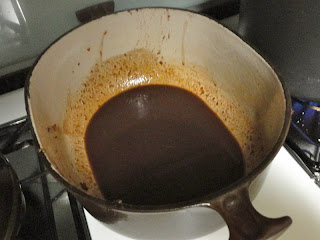 Pass the sauce through a fine sieve, crushing the vegetables as you do to extract the maximum flavors.  Put the resulting sauce back in the Dutch oven on top of the stove.  Remove any excess fat from the surface of the sauce.  Heat the sauce until it coats the back of a wooden spoon. Add the butter in individual cubes one at a time.
At serving time, place a short rib on a bed of mashed potatoes. Put a slice of Cambozola on top of each short rib and pour the sauce over it. Serve at once.
Author: Monte Mathews
Filed Under: Beef Dishes, Chuck Hughes, Iron Chef Chuck Hughes, Le Garde Manger Restaurant, Montreal Restaurants, Short Ribs, Short Ribs of Beef with Cambazola
Lillian Hellmann’s Pot Roast
Lillian Hellmann’s Empanadas