Since I’m on my way there today, a recipe for Quebec’s own Poutine (French Fries with Gravy and Cheese)

As New Yorkers, we’re inclined to feel that our city is superior to almost everywhere else on earth.  And as far food goes, we’re the ultimate snobs. After all, there are now over 24,000 restaurants here  Who can hold a candle to that?

It turns out that Montreal, where I am headed today, has more restaurants per capita than we do.  In New York there’s one for every 1, 228 people.  Montreal, with over 5000 restaurants in its metropolitan area and a population of some 3,720,000, comes in at one restaurant for every 744 people! Take that, New York!  But as I set out today for my 50th ‘high school’ reunion, I can’t help but think back to my last stay in the city of my birth. We couldn’t get over how incredibly good the foodIt’s diverse, palate-pleasing and locally grown. Everywhere we went the settings were both charming and atmospheric.  And the warmth of the hospitality is phenomenal. The big question became how on earth hadn’t we been there a dozen times before?

I was born in Montreal. But the Montreal we just visited was not the Montreal I was born into.  For years the city was divided in two.  There was English Montreal and there was French Montreal.  We English lived in enclaves so cut off from the French-speaking part of the city, my own parents never spoke a word of French.   To be honest, they didn’t have to.  Then came a revolution.  A distinct minority, English Montreal controlled much of the wealth and power.  But the French majority, sensing their culture slipping away, took a stand.  For a while it looked as if the province of Quebec stood a chance of becoming a separate country. Thus began an exodus of English-speakers who left the province in droves.  Frightened by language laws that forbid English signage and insisted that their children be educated wholly in French, they fled. My own family left after four generations of living in the province.  We went south to the United States.  Our cousins went west to Ontario, Alberta, and British Columbia.

But those Anglos who hung in were really the lucky ones.  They now live in one of the most fascinatingly diverse places on earth.  They switch effortlessly from French to English.  They live in a modern city with an award-winning subway system, phenomenal public spaces and a palpable sense of civic pride.
I say this in all honesty: We had not one bad meal in Montreal. In fact, we simply could not choose a favorite. As I drive north today, I still cannot decide where I want to go back to.  But I do know that part of my food itinerary will undoubtedly find a place where I can tuck into a plate of these:  Quebec’s truly original gift to the culinary world: Poutine.  And what is Poutine?  It is French fries and cheese curds smothered in gravy.  And it is absolutely delicious no matter what it sounds like.

I have absolutely no recall of “Poutine” from when I was growing up.  And yet it must have been around.  There’s a whole website devoted to its story, my favorite being how it got its name. At his restaurant Lutin Qui Rit (transl. “The Imp Who Laughs”) in Warwick, Quebec, Fernand LaChance recounted that he had a take-out customer who requested French fries and cheese in a bag to which M. LaChance responded “Ca va faire une maudite poutine” (That’s going to make a damn mess).  The customer, a man named Eddy Lanaisse, actually had the story included in his 2005 obituary: “ I wanted fries, but I saw cheese curds on the counter. I asked Fernand to mix them together.” But true poutine must have sauce and this was a later innovation.

That invention was claimed by Jean-Paul Roy whose restaurant “Roy le Jucep” is still in operation in Drummondville, Quebec. M. Roy says that in 1964, he made a “potato sauce”, which he was slathering on his French fries. He also sold bags of cheddar cheese curds, a specialty of the region. He saw that his customers were adding his fries and sauce to the cheese curds.  He then made the combination a regular menu item.  But what was the ‘potato sauce’?  According to the review on www.montrealpoutine.com, it doesn’t score very high marks. It is described as ‘a corn-starch thickened base of stock, flavored by the sugary-sweet taste of tomatoes and a bit of onion.” Hardly the devine sauce we tasted.  But the reviewer wisely points out: “If this is the plate which inspired future poutiness…it did so largely as inspiration on the potentiality of sauce and cheese curds”.

If you want a taste of the perfectly delicious versions of the dish, we highly recommend this recipe from the phenomenally accurate view of Montreal in Gourmet magazine’s March 2006 issue.  It takes a little effort but it will put the flavor of Quebec on your table, a flavor that I’m already nostalgic for.
The first hurdle was trying to find Cheese Curds in New York. While Gourmet suggests an alternative, Haloumi, I wanted to get as close to Quebec as possible.  I scoured our neighborhood to no avail and then went on line where I discovered a wonderful new Cheese resource. It’s Beecher’s at 900 Broadway (Corner of 20th St) 212-466-3340. This phenomenal shop with its cafe and cheese counter is well worth a visit even if you are not in the market for Poutine.  (I will say in researching where to find Cheese Curds, any number of people seemed to want them strictly for the purpose of making Poutine.) And I loved the shop’s description of what they are: “Cheese in one of its simplest forms. Lactic and slightly salty, these are  tiny, squeaky hunks of immortalized milk”.  You can also order Cheese Curds on-line at www.beecherscheese.com.  So as I head to Montreal for the real thing, I offer you this version that you can make wherever you are. Here, at last, is the recipe.
Recipe for Poutine, French Fries with Gravy and Cheese 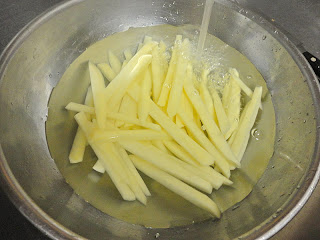 1.   Peel potatoes, then cut lengthwise into 1/4-inch-thick sticks and submerge in a bowl of ice and cold water. Rinse potatoes in several changes of cold water until water is clear. Drain in a colander, then spread potatoes in 1 layer on several layers of paper towels and pat very dry.
2.   Heat about 8 cups vegetable oil in a 5- to 6-quart heavy pot over moderate heat until a deep-fat thermometer registers 375°F. 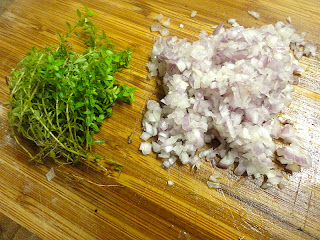 4.   Cook shallot with thyme in butter in a 1- to 1 1/2-quart heavy saucepan over moderate heat, stirring frequently, until shallot is softened and golden, about 2 minutes. Add wine and boil until reduced by half, about 3 minutes. While wine reduces, stir together water and cornstarch until cornstarch is dissolved. Stir 1 cup beef or veal demi-glace into wine and bring to a boil. Strain the sauce through a fine mesh strainer to remove the shallots and thyme.  Whisk in the cornstarch mixture and return to a boil, then boil until sauce is slightly thickened, 2 to 3 minutes. Remove from heat and stir in black pepper, salt, and unsalted butter until butter is melted. 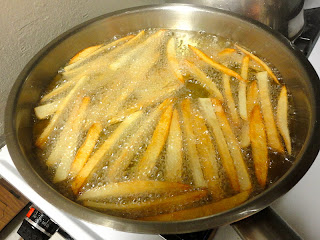 5.   Once oil is ready, increase heat to moderate and fry potatoes in 4 batches, stirring occasionally, until deep golden, 5 to 6 minutes per batch, returning oil to 375°F between batches. Transfer fries with a slotted spoon to a baking sheet lined with several layers of dry paper towels and sprinkle lightly with salt. Keep fries warm in oven while frying remaining batches. 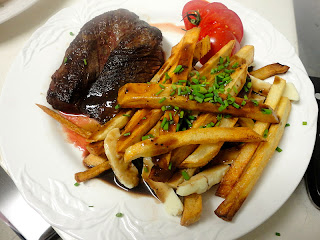 6.   Put 4 ovenproof plates in oven, divide fries among plates, and sprinkle with cheese. Heat until cheese is just warmed through, about 2 minutes. Stir chives into sauce and drizzle over fries. Serve immediately.

4 thoughts on “Since I’m on my way there today, a recipe for Quebec’s own Poutine (French Fries with Gravy and Cheese)”