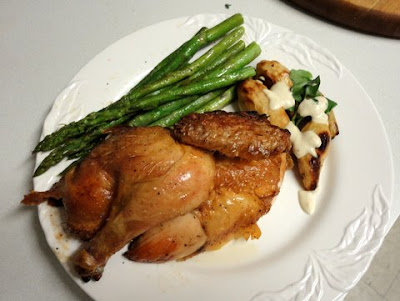 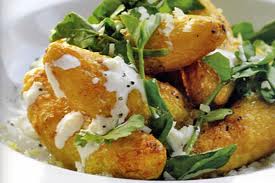 They say that the mark of a good cook is whether they can deliver a perfect Roast Chicken.  Perfect…as  deeply juicy and tender meat covered with the crispest and crunchiest skin.  Frankly, I have never been satisfied with my Roast Chicken.  I’ve tried everything from Marcella Hazan’s very simple recipe of stuffing a bird with a lemon and an onion.  I’ve tried sitting the bird atop a medley of onions, carrots and shallots.  I’ve buttered and herbed under the skin.  I’ve rubbed chickens with canola and olive oils.  I’ve cooked them at every temperature imaginable from 325 to 550 degrees.   I have brined birds, cooked kosher ones and free-rangers and organic offerings.  Never have I cracked the Roast Chicken code. Until now.  And I did it with Andrew’s sister Lauren’s recipe.  And it’s insanely easy.

Lauren is a fabulous cook by all accounts.  And she’s fairly no-nonsense as well.  She claims she’s never had a bad bird with her method and that one and all love her chicken.  I can vouch for both how good it is and how easy it can be cooked.  All you do here is make sure the chicken is a dry as can be before it goes in the oven, use a heavy hand with salt and pepper—nothing else—and cook the bird in a nice hot oven without opening the door for the entire cooking time.  Honestly, this chicken succeeds where every other recipe I’ve used was a failure.  It is so delicious and it looks it.  The crisp skin gives way to melt-in-your-mouth meat.  I noticed no real difference between the juiciness of the breast meat and the dark meat of the legs and thighs.   I believe that this high temperature method never gives the breast a chance to dry out.  I will share a couple of things that I do think also counted besides the cooking method.  You should find a smaller bird in the 2 ½ lb range.  And you should spring for the good stuff.  In this case, I used a bird that was not only organic but also Kosher.  In case you are not familiar with Kosher chicken, it is like buying something that’s been pre-brined for you. The Koshering process must include a salt water bath which is followed by cold, spring water rinses.  Kosher chicken is worth every penny extra you pay.  And the Lauren’s Roast Chicken we ate yesterday had the added advantage of being organic which I swear makes a difference in taste.

Since the chicken simply could not be easier to cook, I want to serve a side dish I’d seen in Food and Wine’s Best of the Best Cookbook Recipes (Volume 13, American Express Publishing 2010). It was for the best looking potatoes I’d seen in a long time.  Little fingerlings were pictured golden and crisp and topped with a Horseradish cream.  Then the dish is brought to life with a handful of watercress.  It looked absolutely delicious and a perfect partner for Lauren’s perfect Roast Chicken.  This recipe was created by Jeff Crump and Bettina Schormann whose Ontario restaurant “The Ancaster Mill”  (548 Old Dundas Road, Ancaster, ON L9G 3J4 Tel: (905) 648-1828) has been at the forefront of the Canadian Slow Food movement.  In their cookbook “Earth to Table” (Harper Collins 2009) Jeff waxes poetic about digging potatoes from the cold earth with his hands.  I had to settle for potatoes dug cold from the refrigerator.  The only labor here is peeling the fingerlings, part of the directions in the Food and Wine recipe, which, given their size, makes for small potatoes indeed. However when I was researching Chef Crump, I came upon an article in the Vancouver Sun in which he clearly states: “I prefer to roast potatoes whole ‘in their jackets,’ which allows them to retain all the flavour and even adds a bit of char to the skins”. Lord knows what they were doing at Food and Wine.  But peeled or unpeeled, they were delicious as promised.  And I ended up with a great deal of leftover Horseradish dressing only to discover it is excellent on asparagus too.

Here are the recipes:
Recipe for Lauren’s Roast Chicken
1-             2 ½ lb chicken, preferably Kosher and organic.
Salt and Freshly Ground Pepper
1.   Preheat oven to 450 degrees F.
2.   Using paper towels, dry the bird thoroughly inside and out. Generously salt and pepper the chicken inside and out. Truss the chicken legs with kitchen string (Kosher chickens generally have the wing tips removed so the wings stay close to the bird.)
Put the chicken on a sheet pan. 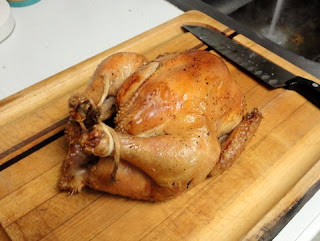 3.   Put the chicken in the 450 degree oven. The chicken will make a great deal of hissing and crackling sounds.  In 45 minutes, check to see if it is done.  Remove from oven and let stand 5 minutes before cutting the bird in half and serve. Serves 2.

Recipe for Roasted Potatoes with Horseradish Dressing
For the Potatoes: 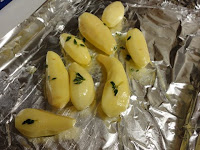 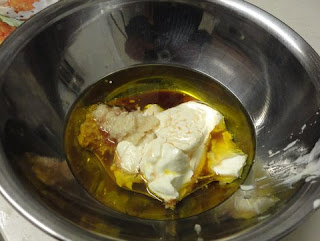 Preheat oven to 450 F (230 C). In a medium bowl, toss potatoes, oil, wine, thyme and salt. Spread out in a single layer on a baking sheet and bake until very tender, about 30 minutes. 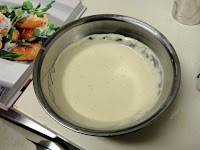 Prepare the dressing: In a large bowl, whisk together oil, sour cream, vinegar and horseradish. Season to taste with salt and pepper. 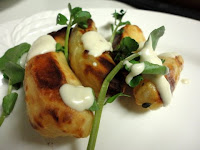 Add warm potatoes to dressing and toss to coat. Divide and top each with a handful of watercress.  Serves 4.  However, cut down on the number of potatoes for 2, make the dressing as above and you’ll have a wonderful topping for other uses.