Next stop in Montreal, an homage to Joe Beef, their recipe for a Foie Gras “Double Down” and a Mushroom Ragu with Burrata Cheese recipe created in Frederic Morin’s honor. 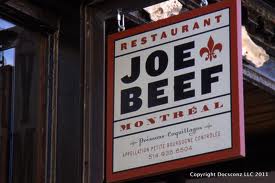 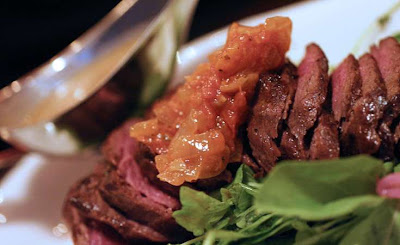 We realized there was no way we were going to pin a “Best Restaurant in Montreal” title on any one of the sensational places we ate.  They were uniformly great.  They all shared one quality that was really important to us. They were truly Quebecois, taking full advantage of what was locally grown. Their recipes were rooted in the cooking that’s made Quebec a foodie destination for far longer than I’ve been alive. And they’re all building on the past to make meals that feel so right today.  Take, for example, Joe Beef. 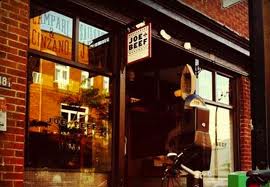 Start out naming the restaurant after a 19th century tavern keeper who fed the poor if they’d do the dishes.  Then put together 3 people named Frederic, Allison and David, whose lives are all about food and good times and exceptional hospitality.  Squeeze them into a tiny space in an area of the city that was far from fashionable.  Let them loose to grow herbs and vegetables in their back garden.  Have one of them build his  own smoker there.  Put in heat lamps and tables back there because the main room is so popular that people would likely endure sitting outside at 40 degrees below just to eat here. Then, of course, make fabulous food. That’s how you get Joe Beef at 2491 Rue Notre Dame Ouest (514-935-6504) in Montreal. 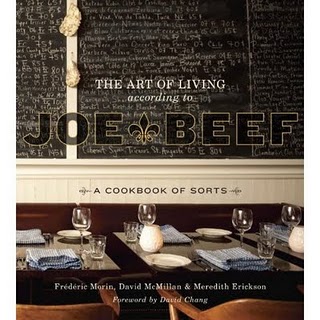 Frederic Morin and David McMillan have just published a new book.  “The Art of Living according to Joe Beef, A cookbook of sorts” (10 Speed Press, 2011) was written by a former server at the restaurant, Meredith Erickson.  It’s one of the most fascinating cookbooks I’ve read in a long time and I read a lot of cookbooks.
It wasn’t even out when we went there for dinner two weeks ago but Fred, whom we had the great privilege of meeting and who showed us around the restaurant, also showed an advanced copy.  Of the many things to love about Fred, the fact that he asked me to buy the book at Barnes and Noble rather than on Amazon.com because he cares about book stores (and because B and N had just doubled their order) gives you some idea of the measure of this man.
Buy the book and you’ll enter a world of personal memories of the two men, Fred’s affinity for rail travel, instructions on how to make your own backyard smoker or brewing up your own absinthe—there’s even a Montreal travel guide.
But the heart of the book is the 135 recipes that burnish its pages with specialties like Spaghetti Homard-Lobster, Foie Gras Breakfast Sandwiches, Pork Fish Sticks and a Marjolaine cake that comes with instructions for making a steel mold to bake it.  To our undying regret, Fred and David’s cooking is constantly evolving and changing so that two of the most amazing dishes we tasted are not in it!  There was a mushroom ragu we sampled that was superb.  And there was a “Cadbury Bar” chocolate confection topped with soft ice cream that we would kill to be able to make.  However, we’ll share with you a recipe that was inspired by this visit and that we hope will do Fred proud. 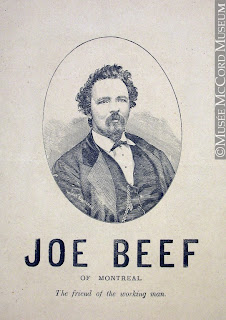 Now about the original “Joe Beef”.  Charles McKeirnan, born in Ireland in 1835, entered the British Army and went off to the Crimean War.  There his talent for supplying food and shelter earned him his nickname: Joe Beef.  He was sent to Canada in 1864 to run British Army canteens in Quebec.  After four years there, he bought his discharge and with his family in tow, he settled in Montreal and opened a tavern.  At the time, there was a liquor license for every 150 Montrealers so Joe had considerable competition.  But “Joe Beef’s Canteen” had a central location and a unique atmosphere and reputation.  It also had a solidly working class clientele who could regularly count on Joe for a free meal as long as they’d do the dishes to earn their keep.  He truly was “a friend of the working man”.   Whether he’d recognize any of the items on his namesake restaurant’s chalkboard today is doubtful. But the spirit of the place, near his old neighborhood, is pure Joe.  And the wonderful food and hospitality is not the only tribute to the memory of this great local character.  For a while Fred and Dave opened McKiernan’s Luncheonette on the other side of Joe Beef. It’s now been absorbed into Joe Beef to handle the dinner crowds.
We sat at the tiny bar in the back of the restaurant, the kitchen opening right into where we were.  An attractive Montreal couple, Paul and Arlene, sat next to us. They were good company and great conversationalists.  We went back for a look at the chalkboard menu which takes up most of one wall of the restaurant and made our choices.  We really felt that we had to hold back.  The steak on offer was 32 ounces for two, which is still twice as much as we could eat. And the ‘entrees’ (which is what Montreal calls its appetizers) were incredibly tempting but again, we felt we had to choose just one. As it turned out, it didn’t matter what we ordered. Our server, an attractive young woman named Vanya, just kept producing more food.
We ordered the Wild Mushroom ragu with the burrata because we love the cheese and were intrigued to see it used on something other than tomatoes.  The minute it was finished, Vanya produced a pork belly appetizer (unordered).   This supremely rich dish was gone in seconds to be replaced by…The Double Down.  Remember all the controversy last year which KFC introduced the Double Down Sandwich?  That was the fast food menu item that consisted of two fried white meat chicken filets which formed ‘the bun’ for a filling of two pieces of bacon, two slices of melted cheese and ‘the Colonels sauce’. The thing was a nutritionist’s nightmare.  While KFC clocked it at 540 calories, its actual calorie count was more like 1228.  And its sodium and fat counts were off the charts.  So what did Joe Beef do? Introducing the Foie Gras Double Down.  Do not ask me what the calorie count or fat count is and do not ask me to go the cardiologist anytime soon.  The thing was absolutely delicious. I have yet to make this at home, but here is the original recipe.

Recipe for Joe Beef Double Down from “The Art of Living According to Joe Beef” (10 Speed Press, 2011).

Makes 2, serves 4.
For the Crust:
2 cups all purpose flour
1 tbsp. brewer’s yeast (Optional)
2 teaspoons baking powder
2 teaspoons crushed pepper
2 teaspoons powdered sage
2 teaspoons salt
2 teaspoons Old Bay Seasoning
1 teaspoon garlic powder
2 cups Buttermilk
For the Mayonnaise:
2 tbsp. mayonnaise
1 teaspoon Sriracha sauce
½ teaspoon Maggi sauce or Marmite
For the Double Down:
4 slices fresh duck foie gras each 3 ounces and ¾ inch thick
Canola oil for deep frying
2 slices good quality Cheddar cheese
4 slices of bacon, fried until crisp
2 tbsp. Maple Syrup
Sea Salt and Pepper
1.   First, make the crust: Sift together the flour, yeast, baking powder, pepper, sage, salt, Old Bay and garlic powder in a bowl.  Keep the buttermilk in the fridge.
2.   Make the mayonnaise: In a bowl, mix together the mayonnaise and the Srircha and Maggi sauces.  Put the sauce in the fridge until serving.
3.   Put the foie gras in the freezer 30 minutes before you are ready to cook it.
4.   Put the oil to a depth of 3 inches into a deep fryer and heat to a temperature of 350 degrees.  To set up the crust assembly, put the bowl containing the flour mixture on your countertop. Pour the buttermilk into a second bowl and put it alongside the flour mixture.
5.   To coat the foie gras slices, one at a time, dip them into the buttermilk mixture first and then into the flour mixture. Repeat the dips a couple more times. Keep the coating soggy—you don’t want it too dry—and resist the urge to pat the slices.
6.   Drop 2 coated foie gras slices into the hot oil and cook for exactly 3 minutes and 20 seconds. Drain briefly on paper towels and pat them dry. Repeat with the remaining 2 slices.
7.   Lay a slice of cheese on 1 ‘patty’, place two slices of bacon on top of the cheese and spread half of the mayo on top. Top with the second patty, then plate. Repeat to build a second stack. Top each stack with a drizzle of maple syrup and a pinch each of crispy sea salt and pepper.
As to the Mushroom Ragu with Burrata, Frederic inspired me to make it. It follows his philosophy of using locally grown foods.  And I added another component.  With the addition of a poached egg, the recipe becomes a perfect supper or, in our case, brunch.  It takes very little time and is one of those delicious discoveries that is worth every minute.   At the Union Square Green Market, we found an assortment of mushrooms.  The mushroom seller reeled off a list of ingredients to cook them with and we were on our way.   We bought beautiful Pane Francese at Fairway, the perfect ‘crostini’ for our ragu.  Then we topped it with the creamy Burrata we loved all summer.  Just splitting apart the cheese and seeing it run down over the mushrooms was mouth-watering.  But then, topping it all off with a poached egg just sealed the deal.  It’s absolutely perfect and I can’t thank Fred enough for the inspiration.  Now if we could only figure out how to make the Cadbury Bar dessert, Andrew and I would be in heaven.  Here’s the recipe:
Recipe for Mushroom Ragu with Burrata and a poached egg.
Serves 4.
1 lb. mixed mushrooms—porcini, oyster, Portobello, baby bellas, cremini.
3 tbsp. unsalted butter
2 cloves garlic, chopped
1 large shallot, finely chopped
1 tsp. fresh thyme leaves
1 tbsp. balsamic vinegar
1 cup Demi Glace or Beef Broth
2 tbsp. Port or Madeira
Salt and Freshly Ground Pepper
8 oz. Burrata cheese
4 poached eggs
4 ½ slices of crusty peasant bread.
2 tbsp. chopped chives 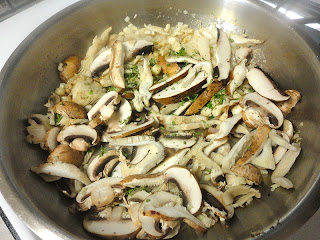 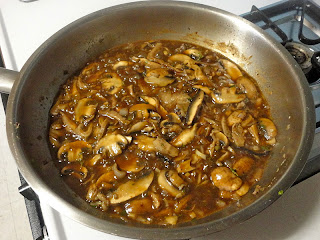 Add balsamic and Demi Glace and bring to a boil.
Reduce liquid until it practically disappears then add Port.  Saute 1 minute longer.  Sprinkle with sale and pepper. Set aside. 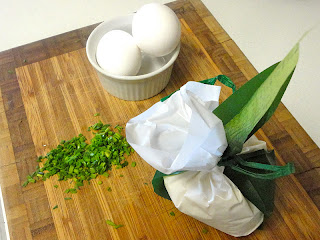 Toast bread slices.  Make poached eggs by putting each egg into rapidly boiling water. If eggs are room temperature, cook for 2 ½ minutes.  If straight from the refrigerator, cook for 3 ½ minutes.
Put a slice of toast on each of 4 plates. Divide mushroom mixture equally and spoon it over the toasts.  Divide Burrata into 4 equal pieces and top each dish with 1 piece.  Place a poached egg on top of each piece of Burrata.  Sprinkle parsley over the dish. Serve at once.
Author: Monte Mathews
Filed Under: David McMillan, Foie Gras Double Down, Frederic Morin, Joe Beef Montreal, Montreal Restaurants, Mushroom Ragu with Burrata, Poached Eggs
To Montreal again and to Iron Chef Chuck Hughes’ newest hit “Le Bremner” plus his incredible recipe for Beef Short Ribs with Cambozola

2 thoughts on “Next stop in Montreal, an homage to Joe Beef, their recipe for a Foie Gras “Double Down” and a Mushroom Ragu with Burrata Cheese recipe created in Frederic Morin’s honor.”