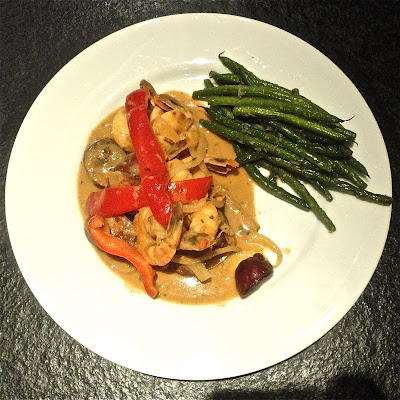 One of the great joys of cooking for me is finding flavor combinations that work together beautifully even though they come from completely different cooking traditions.  That’s what this dinner does. It takes a wonderful Cajun dish from Bon Appetit  full of shrimp and spicy sausage in a truly delicious mustard sauce and pairs it with an Indian side dish. In itself, each dish is wonderful to eat.  Put them together and you create another sensation on the plate.  And it even comes down to color: The green beans are the perfect counterpoint to the bright red peppers, pink shrimp and golden sausage.  And to top it all off, you can get the whole dish on the table in something like 35 minutes.

Shrimp is far-and-away the country’s most popular seafood and, according to Seafood Watch, https://www.montereybayaquarium.org/cr/seafoodwatch.aspx?c=dd,the Monterey Bay Aquarium’s excellent resource for those of us concerned about sustainability in our oceans, a very sound choice.  They even give their stamp of approval to the farmed shrimp of Southeast Asia. Those marvellous bags of frozen shrimp at Costco come from there.  And I probably don’t have to convince you to cook something Cajun.  From Paul Prud’homme to Emeril Legasse, we’ve all been exposed to the rich and wonderful cooking that has its home in Louisiana.  It owes it roots—and its name–to the French Acadians (Cajuns) who were forced to leave Canada after the British invasion successfully invaded. They brought their rustic French culinary traditions to Bayou country.  They adapted these to the foods they found in their new home.  Other influences also crept into the Cajun kitchen. You’ll find African, Caribbean and Native American as well  as French, Spanish, Italian, Portuguese, and even South Asian culinary influences  in Cajun food. Another feature of the cuisine was the frequent use of smoked meats.  So this dish, with its smoked sausage and shrimp, is about as Cajun as you can get.  And yes, the South Asian influence helps account for why Chef Saran’s green beans work so well with the shrimp and sausage.
Indian food is a pleasure to me.  I love the flavors and textures. And once again, I will stand on my soapbox to try to convince one and all what Indian food is not:  It is not all blazingly hot and spicy but rather brings to your plate a complexity of exotic flavors and aromas.  To me, there’s no better introduction to easy-to-make-at-home Indian than Suvir Saran’s “Indian Home Cooking” (Clarkson Potter 2004).  Chef Saran is an excellent guide on the subject.  He’s not making restaurant Indian food in this book:  These recipes come for his home and the cooking done by his family there.  Most of his ingredients don’t require a trip to Curry Hill (New York’s “Little India” on Lexington Avenue in the 20s).  Chef Saran’s ingredients are available in most supermarkets and certainly in places like Whole Foods.  And what I do admire is that the Chef is sensitive to the fact that we may not have everything he uses to make a dish.  In the case of the green beans, there were two omissions I made. The original called for ½ teaspoon of Carom seeds (Ajwain) and 1/8 tsp. of Asafetida.  My personal feeling is that anything that’s ½ a teaspoon or, more laughably, an 1/8th of a teaspoon could not possibly be missed in a pound of green beans. But for your and my information, according to https://indianfood.about.com/, “Carom seeds (Ajwain) are pale khaki colored and look like a smaller version of cumin seeds. They are highly fragrant and smell and taste like thyme (with a stronger flavor).” And from https://www.food.com/library/asafetida-355, Asafetida is “A large fennel-like plant that grows mainly in Iran and India. The powdered gum resin of the asafetida imparts a very strong onion-garlic flavor.” It goes on to say you can substitute garlic and onion powders for the stuff. But will a 1/16thof a teaspoon make a whole lot of difference in the dish?  Tune in after I’ve made a pilgrimage to Curry Hill to stock up.  Meanwhile, I think you’ll love the Green Beans without.  Here are the recipes: 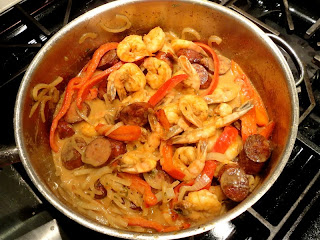 Recipe for Andouille Sausage and Shrimp in a Creole Mustard Sauce adapted* from Bon Appetit.

*Adapted because the original recipe called for Creole Mustard, even mentioning a brand name, Zatarain’s.  Since my supermarket had no such creature, I went to our trusty Food Encyclopedia and found that a substitute could be made using whole grain mustard combined with a couple of teaspoons of Worcestershire sauce.
1 pound uncooked peeled deveined large shrimp
1 tablespoon Creole or Cajun seasoning*
2 tablespoons vegetable oil, divided
1 pound andouille sausage, cut crosswise on diagonal into 3/4-inch-thick pieces
1 large onion, halved, thinly sliced
1 large red bell pepper, cut into 1/3-inch-wide strips
1 tablespoon chopped fresh thyme
1 cup low-salt chicken broth
5 tablespoons Creole mustard (such as Zatarain’s)**
2 teaspoons red wine vinegar
*Available in the spice section of most supermarkets.
** See top of the recipe for a substitute 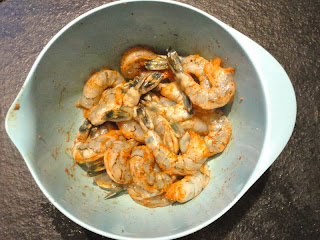 Toss shrimp with Creole seasoning in medium bowl to coat. 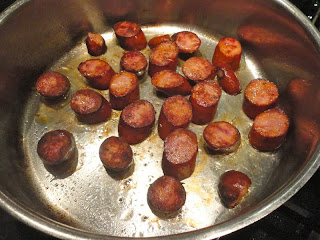 Heat 1 tablespoon oil in heavy large skillet over high heat. Add sausage pieces, cut side down. Cook until browned on both sides, about 5 minutes. Transfer sausage to bowl. 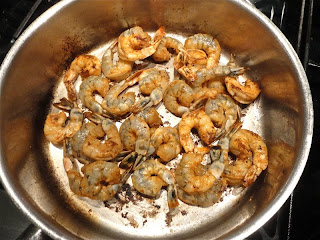 Add shrimp to skillet; cook until browned and just opaque in center, about 3 minutes. Transfer to bowl with sausage. Add remaining 1 tablespoon oil, onion, bell pepper, and thyme to skillet. Sauté until vegetables are beginning to soften, about 5 minutes. Add broth, mustard, and vinegar. Stir until sauce thickens, about 2 minutes. Return sausage and shrimp to skillet. 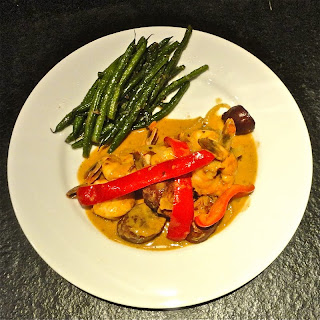 Simmer until heated through, stirring occasionally, about 1 minute. Season with salt and pepper. 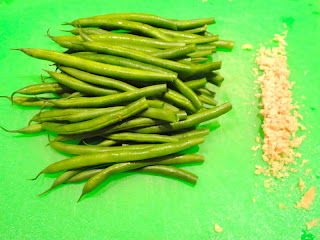 Bring a large saucepan of water to a boil. Add the beans, return to a boil and cook for 2 minutes. Then drain the beans and cool under cold running water or an ice bath. Drain again before cooking. 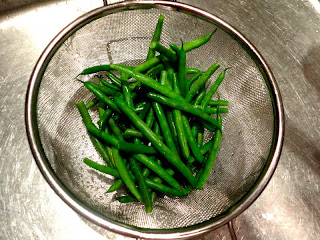 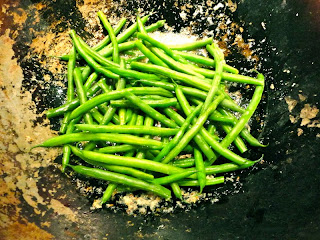 Add the green beans and stir to coat. Sprinkle with salt and stir. Cover, turn the heat to low and cook, stirring 3 or 4 times, until the beans are tender and lightly browned. About 10 to 15 minutes.