Andrew’s Flourless Chocolate Cake with the greatest accolade ever and a Meringue Topping to boot! 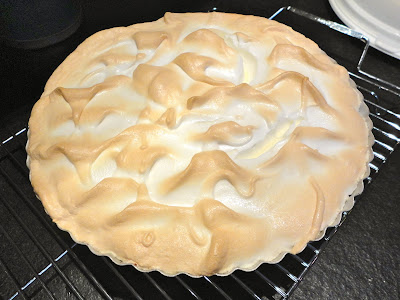 Andrew has quite the reputation for providing a great birthday cake.  Last weekend, he outdid himself by making three! Two were for a seventieth Birthday Party and one was for our lovely friend Blythe, who turned eleven.
The day after having a piece of this incredibly rich chocolate confection with its gorgeous meringue topping, Blythe’s 7 year old brother, Roan, was quoted as saying: “One of Andrew’s cakes is worth 10,000 birthday presents.”   Now if that is not a complement of the highest order, I don’t know what is.  But I do think it’s justified.  Andrew went all out on this one.
The author of this recipe, Sherry Yard, has an illustrious career. She’s the Executive Pastry Chef for Wolfgang Puck Worldwide.  As such she’s responsible for the sweet end of every meal at Spago, Chinois and Cut.  And for the celebrity mad among us, you may interested in knowing that her desserts are prominent features at the Academy Awards, the Grammy Awards and the Emmy Awards.  The Flourless Chocolate Cake recipe came from her second cookbook “Desserts by the Yard”, (Houghton Mifflin 2007).
The reason Andrew chose this recipe is that Blythe, Zoe and Roan’s mother, Monique has recently discovered that she is much better off eating gluten-free.  So in order for everyone in the family to enjoy Blythe’s birthday cake, Andrew went for a gluten-free recipe. Now if gluten-free sounds like a turn-off to you, you’ll be robbing yourself of an amazing treat.
Gluten-free is big these days because thousands of people have discovered that their tummy issues are linked to gluten, a protein that is commonly found in rye, wheat, and barley. Therefore, it is found in most types of cereals and in many types of bread. Not all foods in the grain family contain gluten. You’re safe with wild and brown rice, corn, buckwheat, millet, amaranth, quinoa, teff, oats, soybeans, and sunflower seeds.
I’ve been aware of the gluten issue for a very long time. My college roommate, Michael Cox, went through agony before he was finally diagnosed with celiac disease which is a gluten allergy gone wild.   In the end, Michael became such an expert on the subject that he’s written not one but two Gluten-Free Cookbooks!  You can order them here. I likely should too since I just gave my copy to Monique.
Sherry Yard, meanwhile, writes “if there is one recipe in this book that you must make, this cake is the one.  High praise indeed!  She gives full credit to Charlotte, the owner of a tiny London restaurant called Charlotte’s Place which was across Ealing Green from the cooking school Sherry attended in London. All hail Charlotte!  Andrew offers one final word of advice.  This cake is only as good as the chocolate you use to make it.  So spring for the good stuff and stay away from low-end supermarket chocolate.  Here is the recipe:
Recipe for Flourless Chocolate Cake with Meringue Topping courtesy of Sherry Yard
Equipment:  You must have a 10 inch fluted pan with side at least one inch deep or a 9 inch springform pan.  Anything less and the batter will overflow.
For the cake: 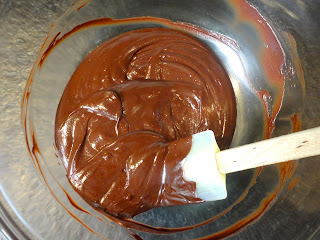 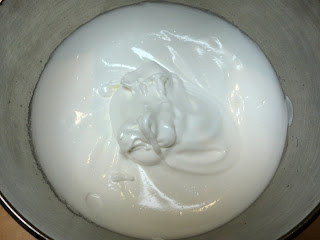 ¼ teaspoon cream of tartar
1 ½ cups sugar (315g)
1 .  For the cake base: Preheat oven to 350F. Grease a 10-inch diameter tart pan (at least one inch deep) or a 9-inch diameter springform pan, place on a foil-lined baking tray, and set aside.
2  . Place chocolate and butter in a double boiler or microwave-safe bowl and heat until completely melted, stirring often to avoid scorching the chocolate. 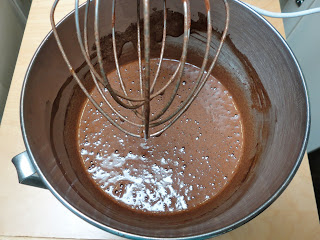 3  . Meanwhile, place eggs in a bowl and run under warm tap water for a few minutes until eggs no longer feel cool to the touch. Crack eggs into the bowl. Add sugar. Using the mixer’s whisk attachment, whip the eggs and sugar on medium speed until mixture is light and thick and falls in a ribbon from whisk – about 2 minutes.
4.   Add cocoa powder and mix on low speed until combined. Add melted chocolate mixture and mix until well combined. 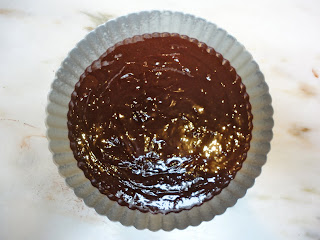 5.   Pour batter into prepared pan, and bake for 12 minutes. Rotate tray front to back and bake for an additional 8-10 minutes, until surface of cake is just firm to the touch but still looks wet in the center and has a bit of jiggle. Place on a cooling rack and cool to room temperature.

6.  For the meringue topping: Preheat oven to 375F. Place egg whites in the bowl of an electric mixer and allow whites to come to room temperature. 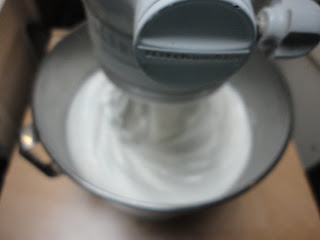 7.   Continue whipping the whites, while adding the sugar little by little, until meringue is thick and glossy and stiff peaks form. 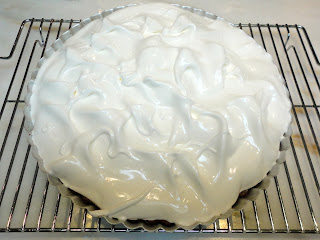 8.   Pile meringue onto cooled cake. Spread meringue to within an inch of the outer edge of the cooled cake base, twirling and fluffing the meringue into attractive peaks and curls. 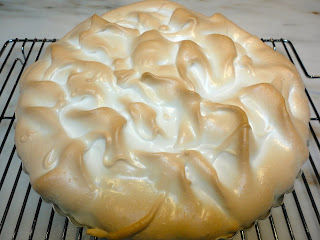 3 thoughts on “Andrew’s Flourless Chocolate Cake with the greatest accolade ever and a Meringue Topping to boot!”